I would like to introduce the Japanese modern architecture buildings located in surrounding area of Imperial palace of Tokyo.

After Meiji restoration in 1868, Marunouchi area has been developed by Iwasaki family who was the founder of Mitsubishi financial conglomerate and purchased the land area of Marunouchi from Meiji government. The street area named Babasaki street was called as“ Iccho-London” because many red-brick buildings modeled after that of London had been constructed in the area. Mitsubishi Ichigokan was the first office building constructed in Japan in 1894. Meiji-Seimeikan is another example bult in the area.

During Taisho-era (1912 – 1926), in the street area named Miyuki-street, lots of buildings with reinforced concrete had been constructed such as Marunouchi-building and so-on. At the timeframe, the street was called as “Iccho-New York”. The building style is stone pitching block with reinforced concrete. Current buildings such as Marunouchi and Shin-Marunouchi are constructed with two layers by lower one and upper one whose architecture style are different with each other.
The lower side of building with 31meter height has been reserved as the architecture style of Taisho-era and Showa-era(1926-1989) whose style is stone pitching block with reinforced concrete. 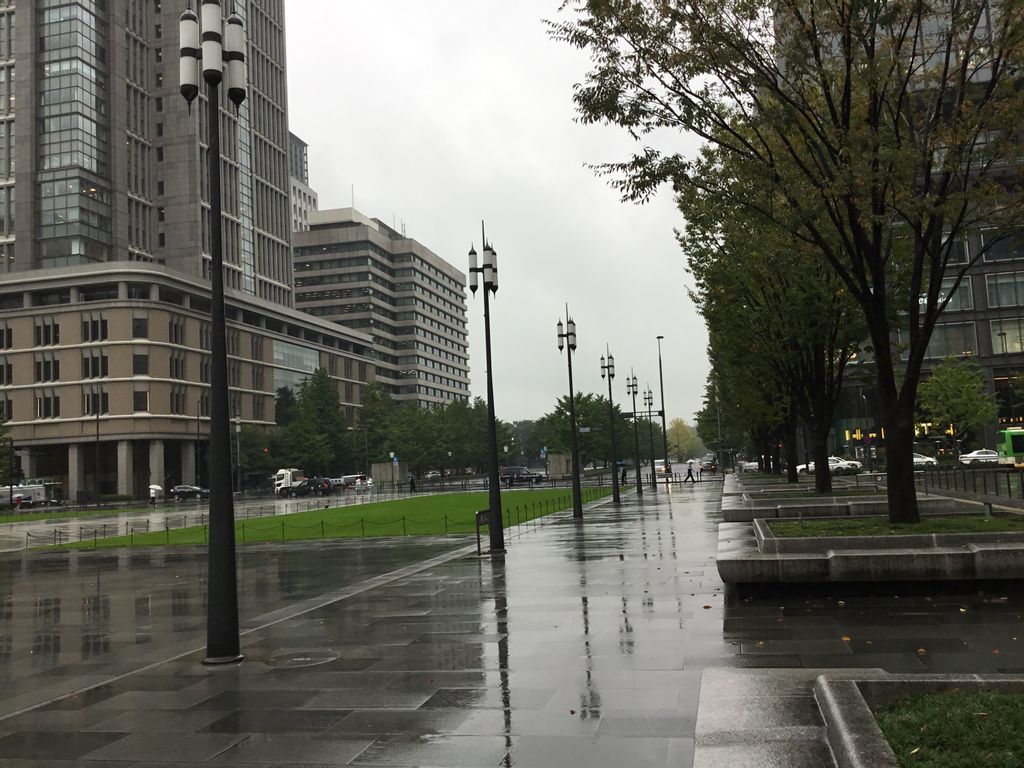 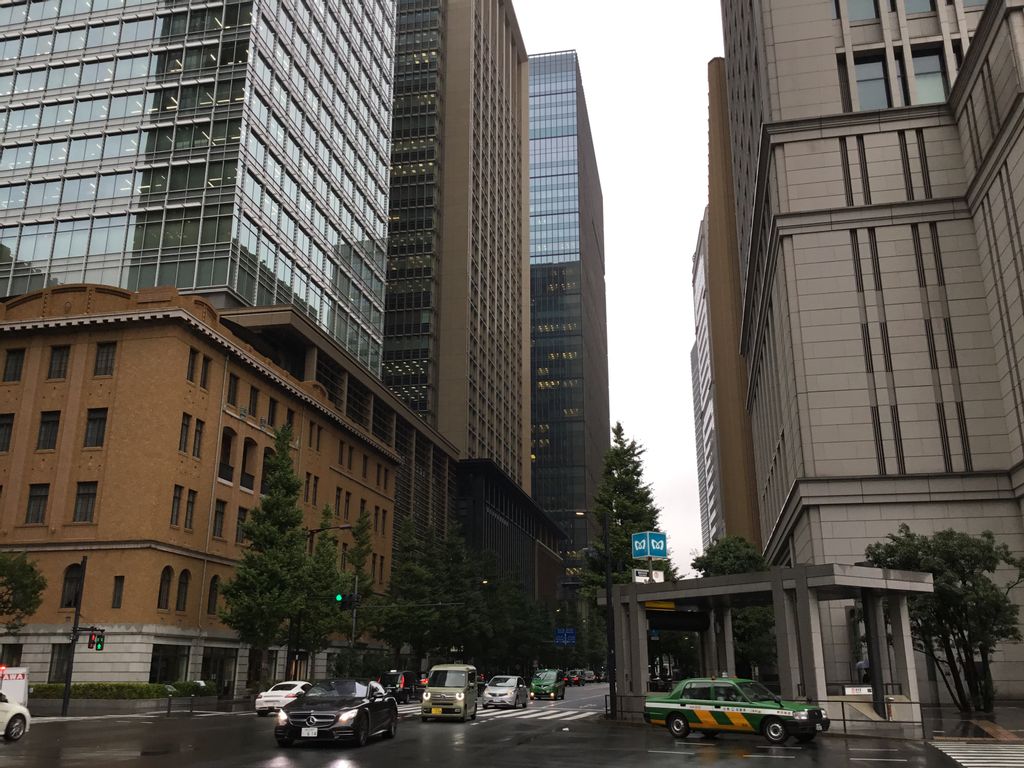 (1) Tokyo station Marunouchi building:
This building was designed and built by Tatsuno Kingo & Kasai Manji in 1914. The 3rd floor was renovated in 2012 after the fire damage of Worls War 2.
Architectural form:
The width is 335meters and the shape is as if a sumo wrestler is performing a ring entrance ceremony.
Entrance:
The center entrance is specialized for Imperial family.
Door:
The door of the center entrance is opened when Imperial families come in.  The shape of the door is a fun used by an umpire of Sumo wrestling.
Pillars:
The pillar is the Doric order seen on Greek temples whose center pillar is expanded that is called entasis style.  The pillars have rolls on the top of Ionia style pillar.
Window/Wall:
The window frame of the center is made by arch style stone jutted.
Roof:
The roof is Dome style thatched by thin sheets made by slate.
Ornament:
Belt-shaped ornament made by granite on red bricks 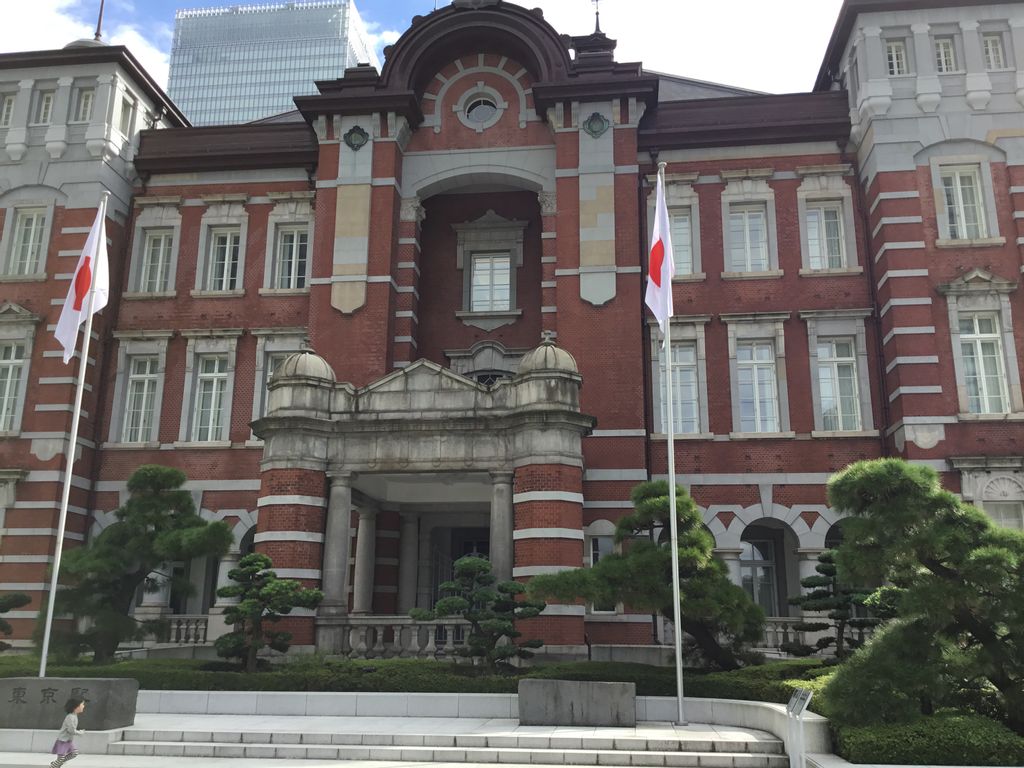 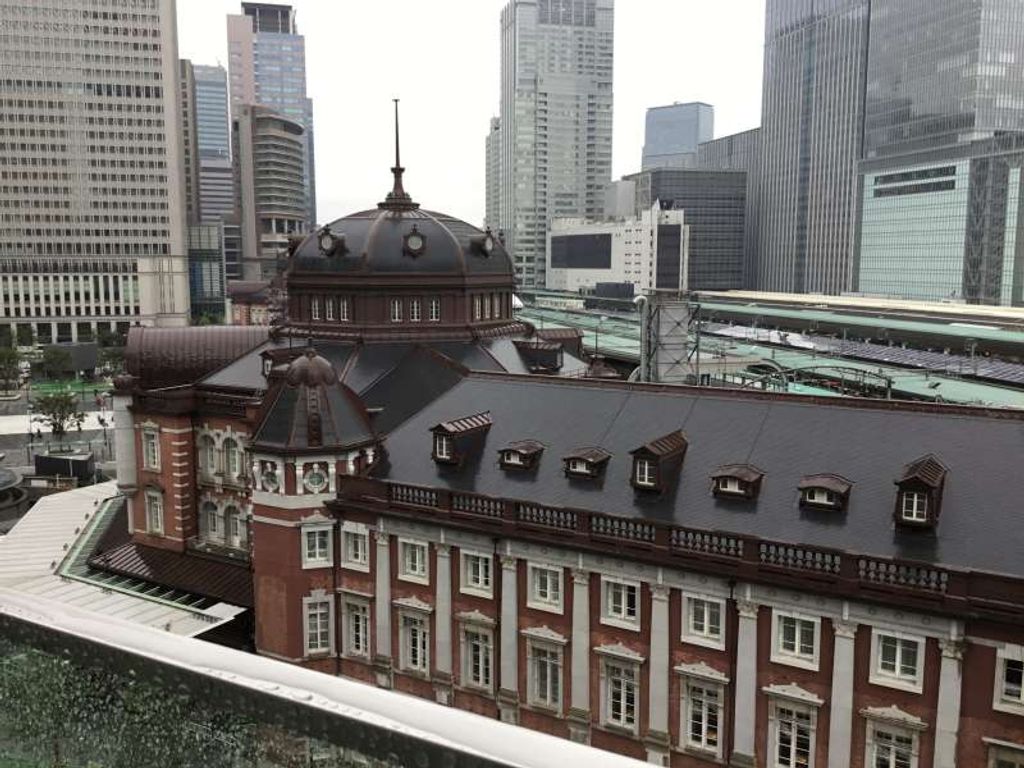 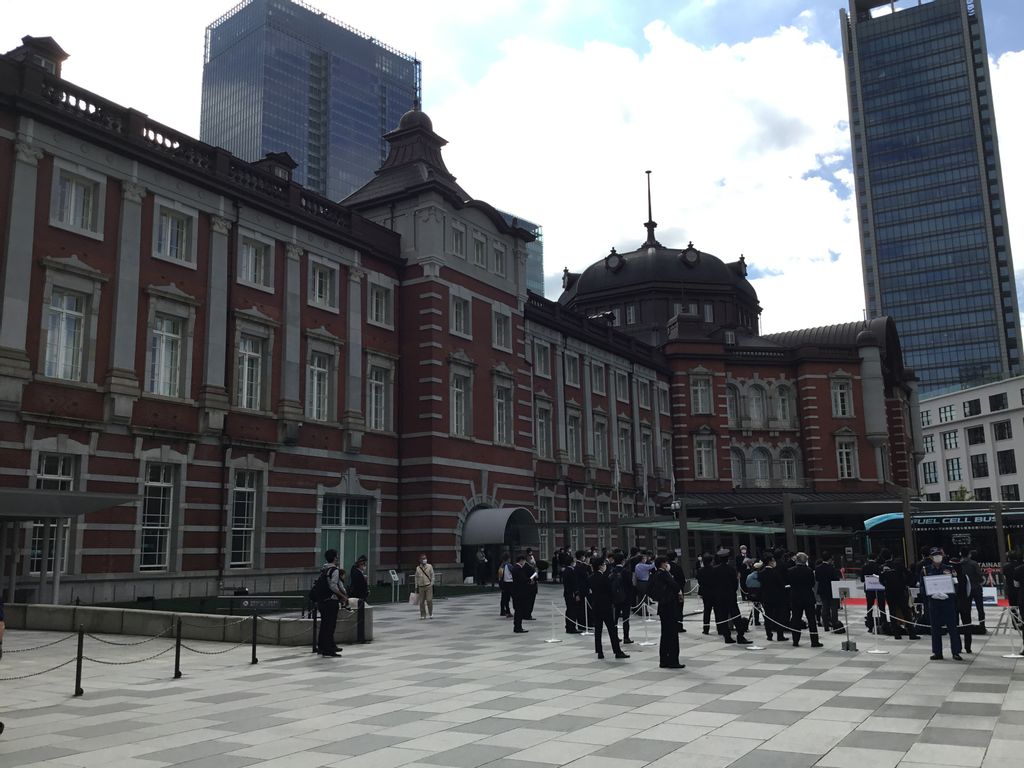 (2) House of Parliament:
The person who designed has not been identified. This building was finished to be built in 1937.
Architectural form:
The height of the building is 65.45m.  The right side of the central tower is for House of Councilors and that of left side for House of Representatives with symmetrical form.
Door:
The central door is opened when the Emperor visit and the first day of the job after the regular election of both House of Councilors and Representatives.
Pillars:
The pillar is the Doric order seen on Greek temples.
Window/Wall:
The outer walls are Full stone and the center top portion of the building looks like stepped pyramid.
Roof:
The roof of the pyramid portion is porcelain tiled.
Ornament:
The flying two phoenixes are curved on the pillar wall of the central portion. 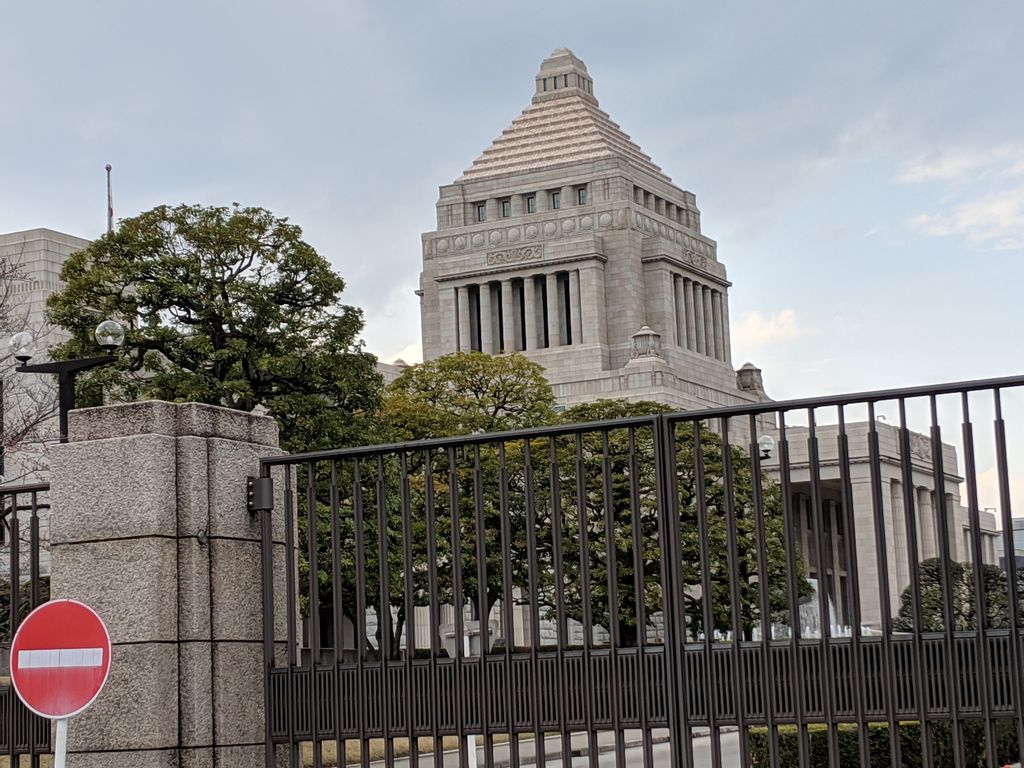 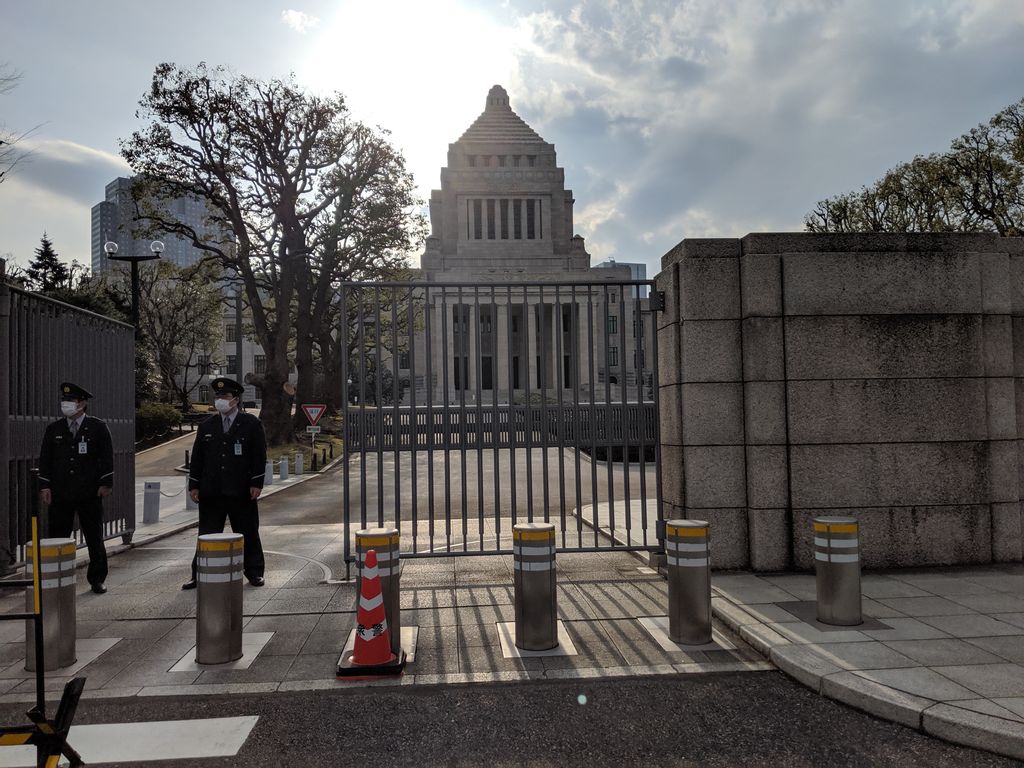 The windows inside are large, open and simple which is the characteristic of modernism architecture.  There are no thick walls inside, only ceiling, floor and pillars exist. The wall face is pasted by porcelain panels that represent the beauty of crafts. (4) Mitsubishi Ichigokan museum:
In 19th century in London, the architecture red bricks used had been popular with the atmosphere of middle ages which are named Victorian style. Josiah Conder applied the style to these buildings constructed on the 100 meter street in Marunouchi area.
Josiah Conder, British architect designed and built in 1894 as the first office building in Japan. All the building was dismantled in 1968.  In 2009, it was restored to the original state as can as possible as a museum.

Architectural form:
Each office of this building is constructed by vertical division with a entrance, each floor and a roof as a one set.
The design of each window flame is different.
Windows/walls:
Red bricks, total number of 2.3million are used which were burned by China.  The window frames are white color with red bricks.
Roof:
The lightning rods which are curved elaborately on the roof which is made by natural slate.  The roof frame is made by wood.
Pillars:
There is a café inside the building. The pillar inside the café is made by iron surrounded by wooden materials. (5) Meiji Seimei Kan:
Meiji Seimei Kan is the historical building where the representative of four countries (USA, England, China and Soviet Union) had discussed how to deal with defeated country Japan.

Okada Shinichiro designed and built in 1934.

This building is American style as American Renaissance which had been popular in modern America based on the Greek and Rome
style. New York Stock Exchange and New York court are the examples of the style.
This building was designed by referring the architecture style.

Architectural form:
The lower part is masonry style, the middle layer has ten giant pillars and the upper layer has continuous windows where the building is 3 parts combined.
Pillars:
Decorations designed with leaves of western thistle are put on the top of pillars that is a motif of Corinthian style and was adopted in Greek temples.  The pillars are magnificent which penetrate five-stories.
Windows/walls:
The outer walls are pasted by granite and the wall faces are divided by three layers.
Ornaments:
The floor tiles inside are made by marble produced in Italy with fossils of Ammonite.
Interior:
By adopting a top-light, natural light from a ceiling shower into the room. Murano Kengo designed and built in 1963.
Architectural form:
This building has two spaces, one is for offices and the other is for theaters with 8 floors above ground, 5 floors below ground and 1st floor opened to outside.
Entrance:
The lobby of 1st floor is the space of museum with glass made art works and sculptures set. The indirect lightnings made by Alminium plate are set in the ceiling.  The gorgeous spiral staircase is set in the lobby as if it is floated.
Windows/walls:
Stone materials named Mikage-stone are pasted on the outer walls that is the architecture style as curtain wall.
Ornaments:
In the ceiling og the hall, 200k of pearl oysters are embedded.  The ceiling and walls are curved that create the image of a cave.
Interior:
The hall of Nissei theater has fantastic space which is created by the undulating walls and ceiling. Yamashita Jyuro and Mitsui Fudosan designed and built in 1968.
The height is 147 meter with 36 floors above ground, 3 floors below ground.
The entrance lobby is open with continuous triangle coffered ceilings where lightnings are set. (8) DN tower 21 / Old Daiichi Seimei-kan:
Douglas Macarthur used this building as a occupation army general headquarters after World War 2 defeat.
Watanabe Jin and Matsumoto Yosaku designed and built in 1938 and in later, the extension and renovation was executed in 1995.

Architectural form:
The main exterior is used by granite and expresses the simple motif and powerful design with removing ornaments.
This building is made by reinforcing steel frame concrete with 8 floors above ground, 4 floors below ground.
This building was built robust considering to endure any air raid, earthquakes, fires and toxic attack. If you become interested in visiting these Japanese modern architecture tour spots, please contact me. I can support you and I recommend the best tour for you.

One day Osaka tour for your great experience

There are several attractions in Osaka. One of them is food culture that is called “Kuidaore by Extravagant in food”. You can enjoy several food markets such as Doutonbori and Kuromon. Another attractive point is to visit several architecture which include both traditional and modernized such as Osaka castle and Umeda sky garden. You can enjoy both of above in this tour.

Yokohama is one of the primary sea gate way to Japan where you can feel exotic atmosphere. Yokohama is located around 45 minutes train from Tokyo. In this tour, you will visit the most impressive places including Sky Garden of Landmark tower, Cruising of Yokohama Bay and red brick storeroom. After having a delicious Chinese food at Yokohama China town, we will visit Sankei-en Japanese Garden.