Today, I would like to introduce a success story of a man who brought himself up from a poor tenant farmer to a billionaire in early 20th century. After his success, he contributed to the preservation of cultural heritages in Japan including a magnificent Japanese Garden attached to a famous luxury hotel – Hotel New Otani. 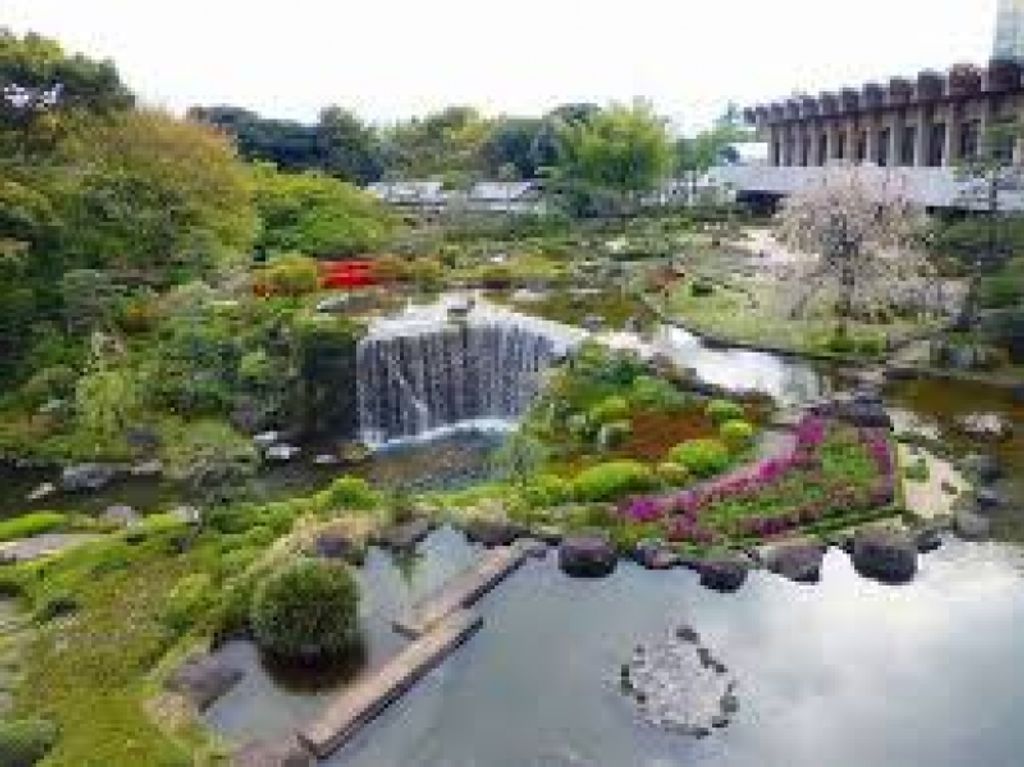 Yonetaro Otani was born in 1881, and he was the eldest son of a tenant farmer’s family with 6 children in Toyama, a north-western part of Japan. In most of his early life, he worked for other farmer’s house in summer and sake brewery house in winter as an apprentice. He was so busy to support his family since he was little that  he could not learn how to read or write. 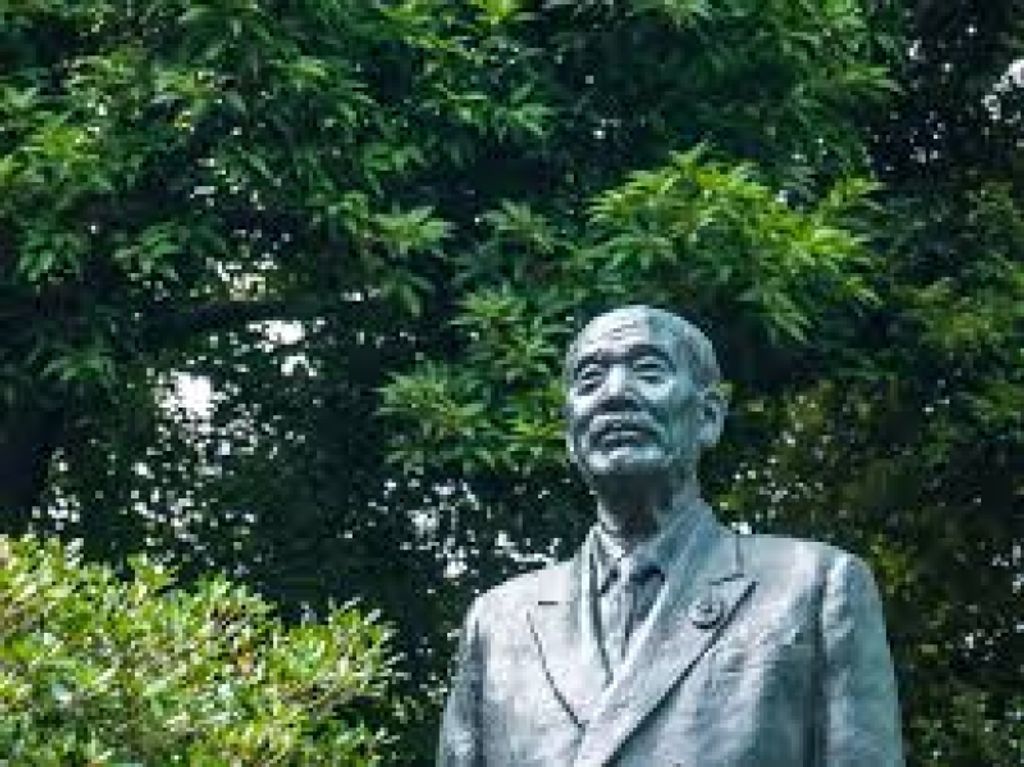 When he turned 24, his father was dead. He was working hard, but he found that his family’s life would never be better even though he did so. One of a few things which brought him a great pride and happiness was a Sumo Wrestling Event which took place every year in his village. As he had a strong, large figure, he often won the first place and could get the prize.

In his 31st, he asked his mother to spare him  3 years to go to Tokyo and try something new. His mother gave him 2 dollars, lots of Onigiri (Japanese Rice Balls) and sent him off. This must be difficult decision for her considered that he was the eldest son of the famiy without a father. However, I presume he had already shown a talent or mindset which made her believe in her son’s success.

Having said that, the first thing  he found when arrived in Tokyo was he cannot get a job without a reference letter. He had to use most of the 2 dollars to stay one night in a lodging. Luckily, he could get a job thanks to the information about day labor job from his roommate . He  managed to get a job as a docker. Since his body was very big and he could carry many baggages. He was praised by others in his first day at work. This experience helped him to keep his head up even in the worst days in his later life, he says. Since it was a day job, he could not always get a job. Yet he kept saving even a small amount of money believing in next opportunity.

After a while, he decided to be a Sumo Wrestler since there was a trend of Sumo Wrestlers making a tour in America in early 20th. He asked his acquaintances from his home country to train him as a Wrestler, and climbed up to the higher rank called ‘十両.’ However, the American tour was not welcomed anymore when he became a professional. He also damaged his wrist so he needed to give up his career as a Sumo Wrestler and started to work as a sake dealer specialized for Sumo industry.

He never gave up and became a billionaire

Otani’s business mindset was to sacrifice himself to deliver the best quality of sake with the cheapest price. The profit was so small, but he gained the reputation and trust and only his company are allowed to deal all sake sold and consumed in 国技館 the small Hall in Tokyo. Several years later, he expand his business to steal-iron industry. But in this process, he had to confront an ordial. He was illiterate. But instead he had a high communication skill and the instinct to find out what is needed in the idusty, which perhaps were auuired through hands on experience.  At the end of the day,  he gained more than 10 patents for the production of iron roller.

He had expanded his business until the world war 2 and people called him as ‘a steel lord’ in early 20th. Though he suffered from the loss of his properties after World War 2 and a big earthquake, he contributed his money to reconstruct the treasure gate of Sensoji in Asakusa, and to build a college in his hometown. He always ashamed of not properly studied at school.  He also said, he never forgot the experience where a son of the farmer he worked for insulted his family’s about economic situation in his adolecense. It had been his long-cherished dream to build a school at his hometown.

This is not the only achievemrnt. When Tokyo metropolitan government decided to host a Tokyo Olympic in 1964, he bought a land of former feudal lords in Edo period(17th-19th) and transformed it into a luxury hotel to welcome important guest and dynamic Japanese gardens. 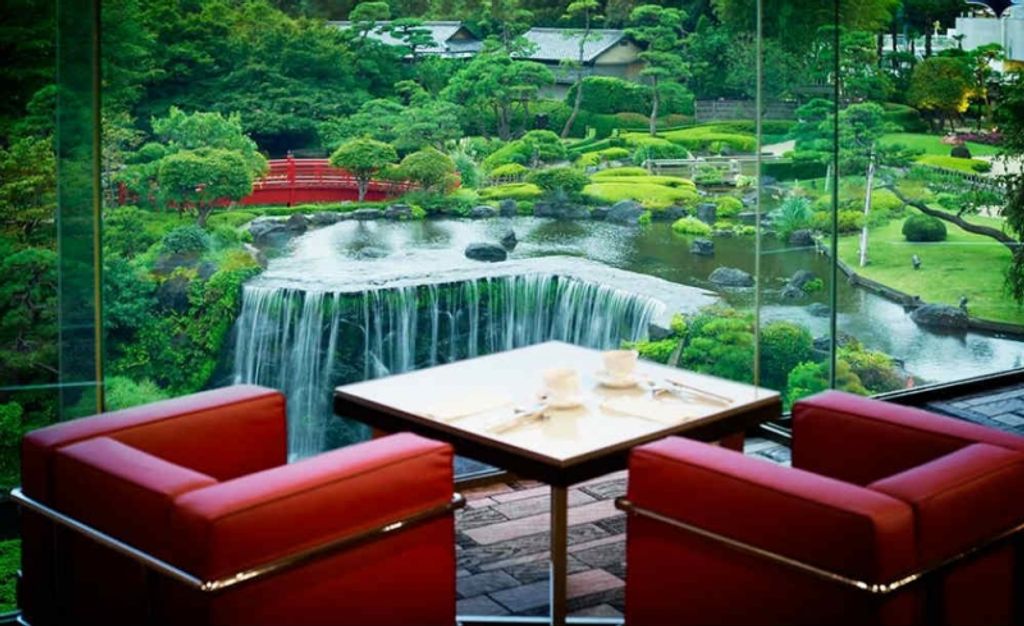 This garden situates in the area where the residence of current Emperor and Empress families is and other important facilities for lawmakers. There is a massive water cascade which use the maximum of sloped landscape and balance with the high rise building of the hotel. This garden contains both modern and historical elements in harmonious way. It was created by a famous Japanese gardener in 20th century: Sentaro Iwaki. His uncle was also a pioneer of Japanese gardens called Ueji which name can not be missed if you learn about Japanese garden.

Unlike other traditional gardens, this garden is beautifully maintained by full-time employee of the hotel. They are hotelman and not only dedicated to the garden job, but they have a pride to maintain their garden beautiful to please hotel guess. They also gather new ideas to ransform garden, and  the dry garden in front of the event hall was created according to their ideas.

Leaning about former owners of historical garden is the fun part. Please book my tour if you would like to know more about this garden or others.

Today, I would like to introduce a success story of a man who brought himself up from a poor tenant farmer to a billionaire in early 20th century. Aft...

Matsuri - feel the spirit of Japan

Matsuri refers to festivals. There are numerous matsuri in Japan throughout the year. The original purpose of matsuri is to show thanks for the harv...

Sushi is now widely kown all over the world.   And the standard  form of Sushi is 'Nigiri-zushi,' which originated from  Edomae sushi(Edo= ancient T...

Although rice is our soul food, we cannot also stop loving breads.   When you feel like to grab a sandwitch, and drop by a bakery in Japan, you will...

Although I enjoy beautiful, unique, stylish design of products from all over the world, there are 2 categories of items, which I am pretty confident a...

Can rice make you a millionaire?

Can rice make you a millionaire?   The answer is yes, but if you were born in Japan between Edo-Meiji period.   Rice is the soul food of Japanese....

This is a half-day tour to enjoy the culture and lifestyle of Tokyo from 16th century(Edo)- to contemporary.You can see how the landscape has been transformed in Tokyo between 16th-21th century. Also, you can 'experience' the Edo culture by staying, touching, tasting, and viewing.Let's do a time trip together!You can start this tour anytime between 9:00 - 15:30.

Have you visited major tourist place already and want to do excursion without being bothered by tourist chaos? If so, come to Okutama! This mountainous are of the west side of Tokyo has all elements of Japanese culture. Shrines, temples, dry garden, traditional arts, pottery making, hiking routes, water sports activities, sake brewery and hot spring! I can make a customized tour for your choice.

The area nearby JR Enzan station called Kosyu(甲州) is the hometown of a famous samurai warrior: Shingen Takeda. It is just 1.5 hours by express from Shinjuku station. Here, you can find various kinds of onsen, wineries, fruit orchards, temples, hiking route with magnificent view towards Mt.Fuji and museums. If you stay in Tokyo more than 3 nights, switch one night to stay here!

Half day walk in Tokyo with '' Lady Musashino''

We are visiting Kokubunji-Koganei area (30mins from Shinjuku by train) walking from shrines, temples to hidden gardens in the fresh air. This is a quiet residential area with numerous water springs and native woodlands. The history and geology of this area is remarkable. You will be surprised how much clear fresh water flowing in this central Tokyo and ancient heritages integrated in modern life.

In this tour, the guide will create a special itinerary with mixture of major and minor spots according to the result of hearing from customers. I would rather choose places where locals love to visit in week-end.

This is a tour to visit Japanese gardens of your taste with an expert. With my background as a landscape designer, and personal experience to have visited more than 100 gardens all over the world, I can create a special itinerary of your best interests, season and access. I am also happy to make your dream 'Things to do in Japanese Garden' come true!

Plan your trip to Tokyo with Kaori O.