Fukuoka is perhaps less famous than other parts of Japan for its temples and shrines, but it does have plenty, and some of them are a delight. From Kushida Shrine, which plays host annually to one of the biggest festivals in Japan, to the area of Dazaifu, which has a wealth of history and ancient temples and shrines. Here are the top five to enjoy on your trip to Fukuoka: 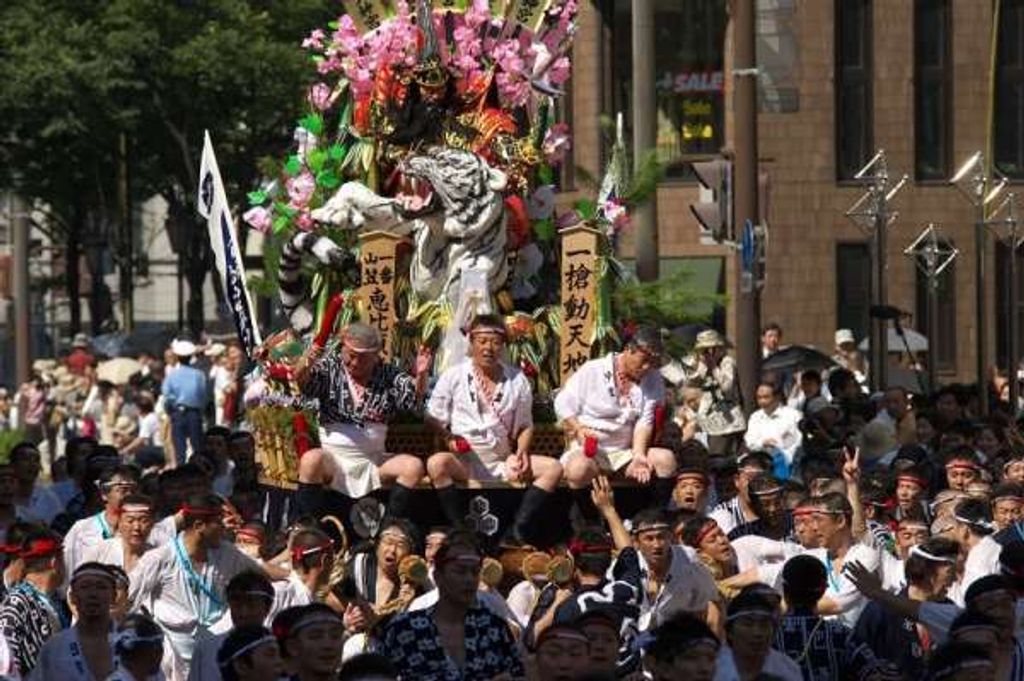 Established in 757, the shrine has been worshiped by local citizens as “Kushida-sama” for business prosperity and youth, and it is the oldest shrine with the local god of Hakata. For 770 years starting from 1241, the Hakata Gion Yamakasa Festival, famous for its proud tradition, has made Kushida Shrine famous as a dedicatory shrine, and it is there that a permanent display of Yamakasa floats which rise 10 meters and are decorated with gorgeous Hakata dolls is located on the shrine grounds. Also, the Reisen Tsuru well which is supposed to bring youth and long life is good for drinking three mouthfuls of water; the first drink ensures youth and long life for the drinker, the second drink is for the family and the third is for blood relatives. As well, there is the sacred 1000-year-old tree known as the Kushida-no-Ginan as a symbol of long life, the Fufu Ginan is known as a female tree whose trunk branches out into three trunks and bears golden fruit in the fall; from this point of bearing descendants, it is known as a spiritual tree for matrimonial happiness and matchmaking. Also, due to the enthusiastic holding of Unohi Sumo at Kushida Shrine, power stones known as Rikishi which are lifted by famous sumo wrestlers to boast their strength are given as offerings. There is also a shopping arcade nearby which is within walking distance of Hakata Station so Kushida Shrine is a place which can be visited by tourists in Hakata. You can get a flavor of Hakata from the brilliant costumes and Yamakasa on display there.

Originally started as a prayer to ward off an epidemic, the Hakata Gion Yamakasa Festival starts annually from July 1st and goes on for 15 days with the 15th being the climax with the float races. At 4:59 a.m. at the break of dawn, the floats take off from Kushida Shrine to the sound of large taiko drums, and do a timed race for about 5 km toward Susakimachi. New Yamakasa floats are created every year by artisans. During the time of the festival, the shopping arcade and street corners have about 20 of the floats positioned there so that you can get a close-up view of them. 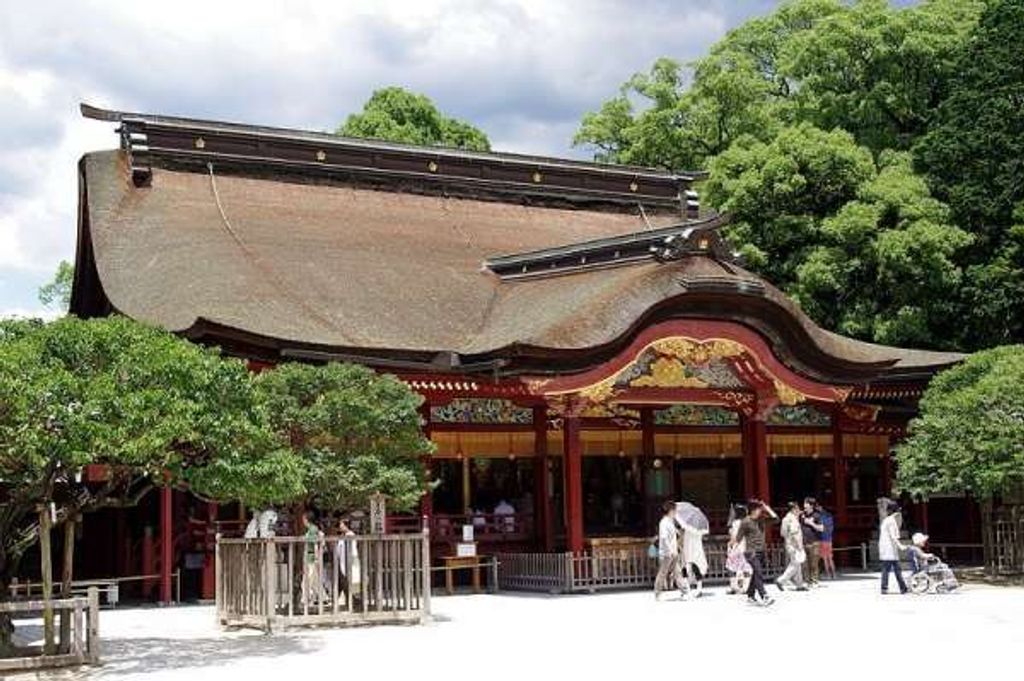 The national head shrine for 12,000 shrines, Dazaifu Tenman-gū is dedicated to the God of Learning, Tenjin, the deified form of Sugawara, and attracts 7 million visitors annually in granting the wishes for passing examinations and academic achievement. Sugawara, who displayed academic talent at a young age and took on the roles of a scholar, politician and a man of culture, passed away in the year 903 in the south building of the Dazaifu government house (the current Enokisha Shrine within the shrine grounds) where he had resided and is now buried there.

Within the shrine grounds, there are about 6,000 plum trees of 200 different species planted, and the time spanning the beginning of February to the middle of March is the peak time to view them. The roasted rice cakes, Umegaya Mochi, which is associated with the plums, are a well-known product, and along the 450m sando path which stretches from east to west, there are approximately 80 shops from where the smoky aroma of the rice cakes float in the air. At the information office right by the entrance to the shrine, original goods associated with Dazaifu are also sold. The bronze statue of the Sacred Ox is a symbol of Tenman-gū. The reason for this is said to have come from a legend which states that Sugawara had been born in the year of the ox and that an ox-drawn cart moved his remains to their final resting place. When the ox suddenly refused to move, it was seen as the oracle for Sugawara and thus he was buried right there in the very site where Tenman-gū would be built. There is a total of 12 oxen made of bronze or stone within the grounds, and among these, the Sacred Ox is worshiped for the knowledge that can be granted to visitors if its head is patted. At Shinji Pond whose shape resembles that of the kanji character for “mind”, there is an arched bridge followed by a flat bridge in turn followed by another arched bridge which represent the past, the present and the future respectively. Traversing on these bridges, body and mind are cleansed so that a visitor can head over to the honden (Main Shrine). The well to purify one’s mouth and hands in front of the tower gate is Japan’s largest example created from one single huge rock. The honden which also serves as Sugawara’s tomb has a roof made from cypress bark and has retained its lovely appearance for over 400 years. It has been designated nationally as an Important Cultural Property. 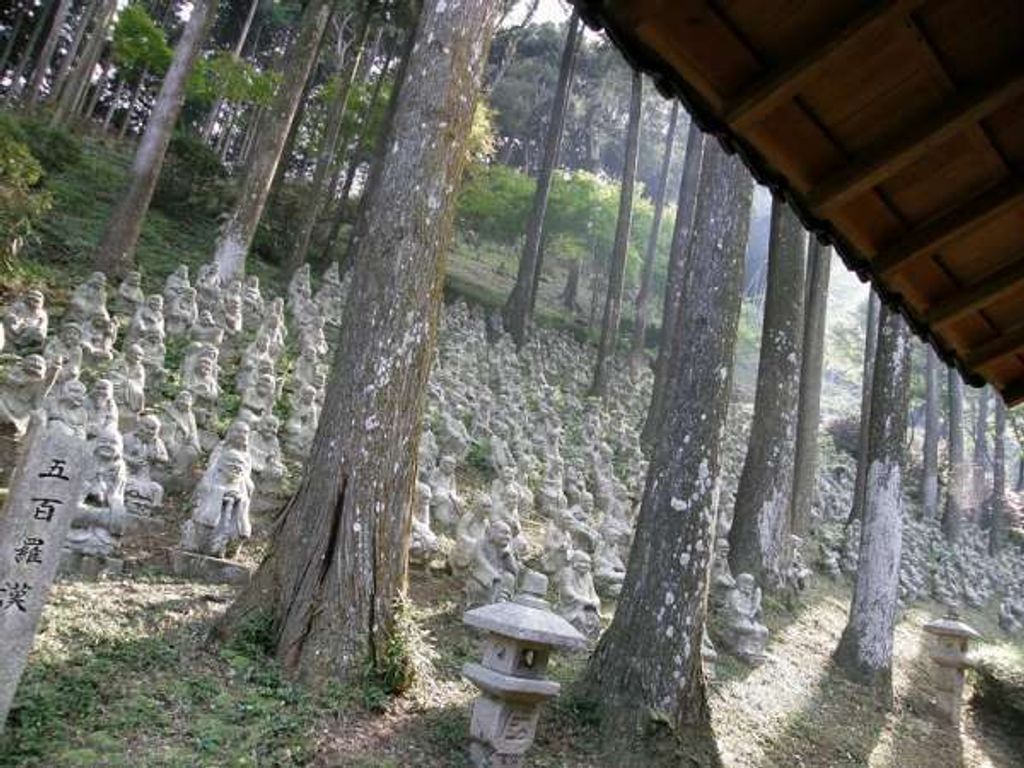 Sennyo-ji Temple, which stands on the side of the 955.45m Mt. Raizan, was founded by the Indian monk Seiga Shonin in the year 148. It was said by the people of those ancient times that because of the frequent instances of the tremendous sound of thunder, the lightning racing across the skies and the heavy rains witnessed, the God of Thunder has been enshrined from the feelings of the awesome power of nature. Halls commemorating the Senju Kannon and the founder of the temple along with the statues of the 500 disciples beside the latter hall can all be visited, and on the grounds, the wooden seated statue of Seiga Shonin is enshrined. Access to the temple is only by car and public bus.

In Shinji Garden, which is the courtyard by the pond shaped as the kanji character for kokoro or heart, there are 600-year-old sandalwood trees and other beautiful flora which can be seen throughout the four seasons, and the views from various places in the temple buildings are extremely wonderful. You will reach the Kannon Hall by going up the spiral staircase. Presumed to have been built about 700 years ago, the Senju Kannon has 11 faces on its head and 1000 arms with eyes located on the palm of every hand. Carved entirely from a 4m63cm Japanese white birch, it has been nationally designated as an Important Cultural Property. If you go further up, the 500 disciples of Buddha (rakan) are lined up tightly on the slope, each with a different expression and appearance. Also known as a famous place for the fall colors, there are over 200 large maple trees planted inside the garden that was built in the Muromachi Era. The feudal lord of Fukuoka, Tsugutaka Kuroda, had these lovely 400-year-old trees planted 260 years ago, and they have been prefecturally designated as Natural Monuments of Fukuoka. 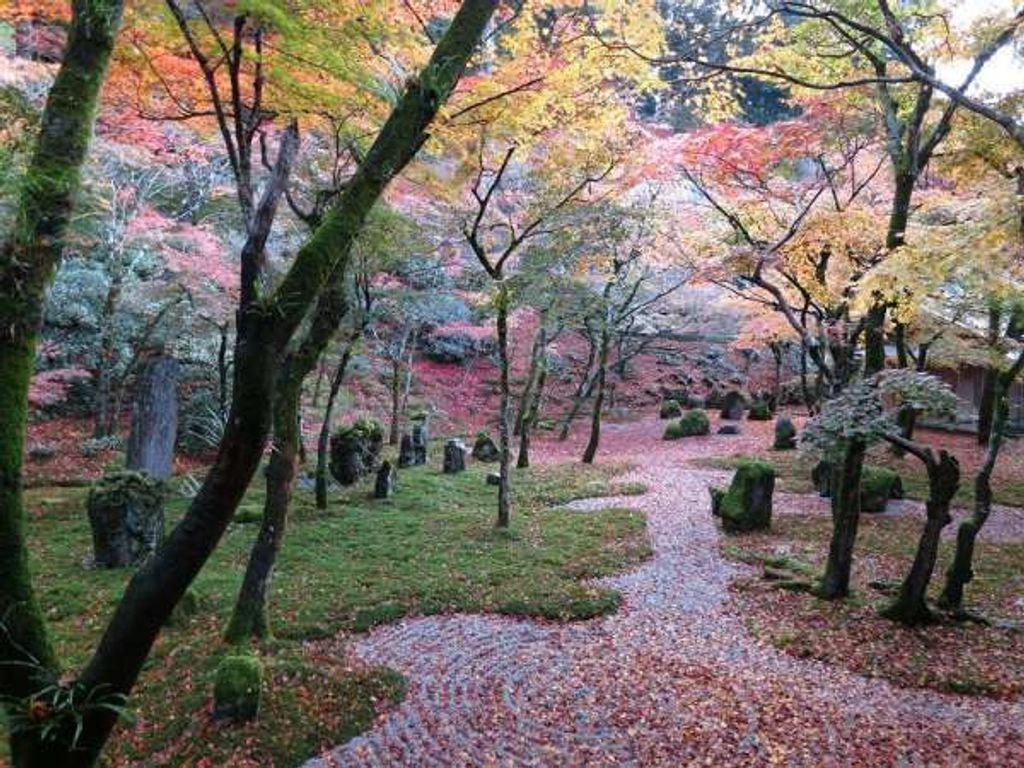 A Rinzai Zen temple known for the beauty of its garden, Kōmyōzen-ji is also associated with a Tenman-gu shrine. Established in 1273, the temple surrounded by nature and tranquility is very close to Dazaifu Tenman-gu Shrine, being only a 5-minute walk away after climbing up the path toward the Tenman-gu and then turning right. Also known as Kokedera (Moss Temple), the grounds contain the Fukkou Rock Garden whose rocks form the kanji character for “light” and a karesansui (dry landscape) garden made from rocks and sand without using any water. The inner garden, Ittekikai-no-Niwa, has 49 types of moss representing the land with white sand forming the sea. A garden whose maintenance only requires sweeping in the morning and evening and minimal pruning, its beauty interwoven with nature is captivating. You can stop in the corridor of the hondomain hall and view the garden while spending a leisurely time enveloped in tranquility. In spring, the greenery is beautiful and in the rock garden, there is a stark contrast between the trees and the moss.

In the fall, the temple takes on an even greater atmosphere as a place which is known for the autumn colors, and usually at the end of October, the leaves start changing colors with the peak time between the middle and end of November for the maple trees. During this season, the teahouse is opened and from there, the view of the Ittekikai-no-Niwa garden is wonderful. The contrast between the 300-year-old maple trees and the carpet of red maple leaves over the white sand ocean of the dry landscape garden is incredible. If you are visiting Dazaifu Tenman-gu, then you will want to make that extra trip over to the temple. There is no particular place to collect admission at a Zen temple, but there is a collection box positioned at the entrance into the main hall. Since there is no change provided there, it will be necessary to prepare exact change ahead of time. 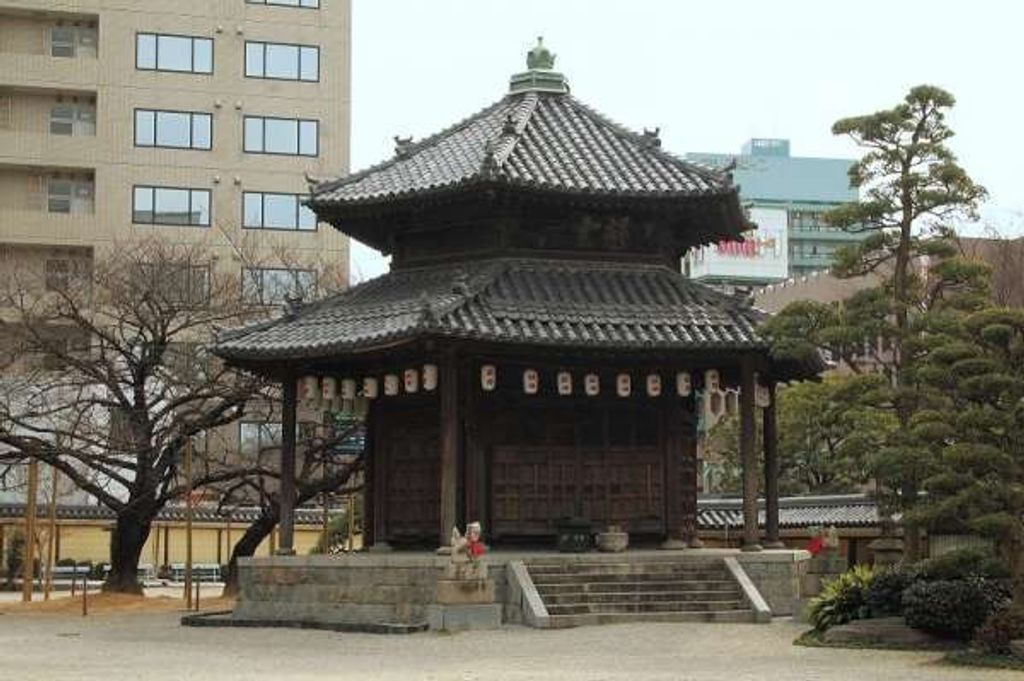 10 minutes away from Hakata Station on foot, Tocho-ji was built in 806 by the monk Kukai (Kobo Daishi) as the head temple for the Shingon sect in Kyushu. It is also the oldest Shingon temple of the area. It was initially located by the sea, but it was moved to its current location by the leader of the Fukuoka clan, Tadayuki Kuroda, and became the family temple for the Kurodas. The Rokkaku-do, which was built in 1842, is a civic cultural property in which is enshrined a hexagonal Buddha statue known as Zushi which can rotate. It is open to the public only on the 28th day of every month. Also, the 87cm-tall Senju Kannon Bosatsu at the temple storehouse is a wooden statue from the Heian Era which has been designated as a National Treasure which can only be viewed once a year on March 21st. The 5-floor pagoda which was completed in 2011 is a relatively new structure so its wooden construction is extremely beautiful. In the bowl-shaped part of the finial immediately above the 5th-floor tiles, it is said that it contains the busshari, or the ashes of the Buddha, that Kukai had brought back with him.

The Fukuoka Daibutsu which is enshrined in the Great Buddha Hall on the 2nd floor is Japan’s largest wooden seated Buddha statue at a height of 10.8 meters and a weight of 30 tonnes. The statue took 4 years to complete starting from 1988. The 16.1m-tall Ring of Light behind the statue consists of many carved images of Buddha, and behind it, there are 5000 little Buddha enshrined as well. Below the seat of the Daibutsu, there is the Pilgrimage of Heaven and Hell, and in front of the relief of the picture scroll of Hell, there is a pitch-black corridor that is so dark that you cannot even see your own hand. You have to hold onto the handrail to be able to proceed, and if you can feel the Ring of Buddha which is in the middle of the corridor, then it is said that you can reach the Promised Land. Proceeding through the darkness, at the exit, you will come across the picture of Heaven. There is a deep meaning evoked in that even in the middle of such darkness, with the help of Buddha’s guiding path (the handrail), you will be able to reach Heaven.