What custom do 28 million Japanese practice every morning? (with Video)

Every morning, 365 days a year, citizens gather at parks, schools, and sports centres throughout Japan to take part in a truly amazing spectacle.  This is radio callisthenics, or radio exercises as they are known in Japanese (ラジオ体操-rajio taisou).  Its an event that welcomes all people, young and old,  to strengthen community bonds and promote health.  It is also something that is quite unique to Japan, and largely unpracticed outside of East Asia.

Radio exercises, as can be read from the name, is a type of warm up calisthenics that is performed with music via a public NHK radio broadcast.  It is an especially popular activity in schools and sports clubs, but is also widely seen in public parks and even companies as a way of promoting a fresh, healthy start to the day. 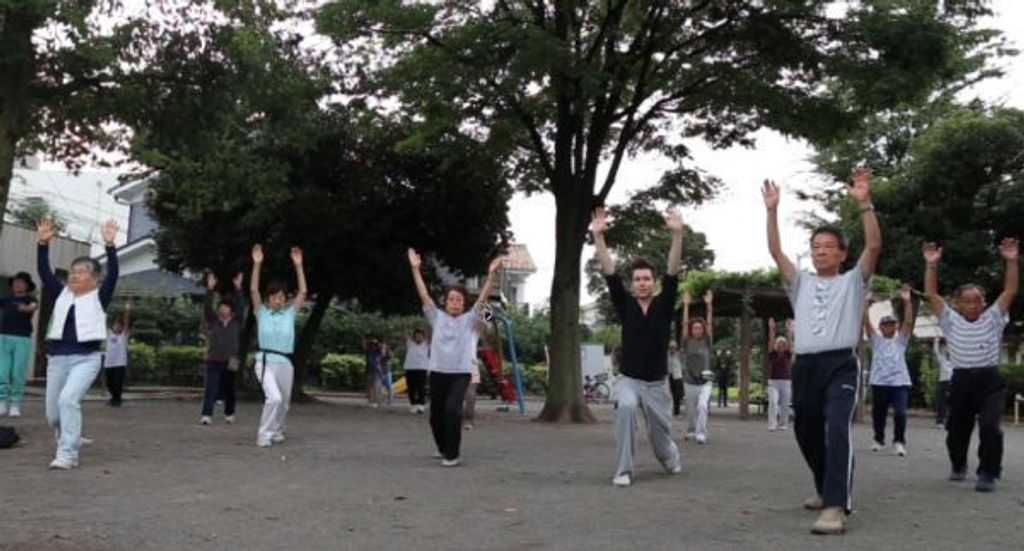 Radio exercises were originally introduced in Japan in the year 1928 to commemorate Emperor Hirohito.  Originally, the exercises were used to improve the health and fitness of Japanese soldiers during the 1930s and 40s, but have since been adopted by all of Japanese society as way of maintaining a healthy lifestyle.  Today, it is still common practice to take part in radio exercises in the morning, but the NHK also broadcasts radio exercise music at specific periods all throughout the day.

If you ever have the chance, I highly encourage you to take part in radio exercises at least once.  For one thing, it is a brilliant way to start the day, and you'll be pleasantly surprised at how limber and awake you feel after just a short stint of exercise paired with bubbly piano music.  What's more, however, is that you will get a nice glimpse into an everyday part of Japanese life.  With the young and old gathering at such an ungodly hour to take part in such a healthy, beneficial activity - its truly an amazing sight and an integral part of Japanese community living.

If you are visiting Tokyo, probably your best bet for radio excises would be Ueno Park, as participants sometimes number in the hundreds.  Don't be afraid if its your first time.  You will probably look a little dorky, but then again, so will everyone else!

Below is a map of Ueno park where you can find the exact location of the radio exercises.  Its best to get there around 6:00am (official start time is 6:30), and preferably on a warm, non-rainy day.

All of Tokyo Radio Exercises Locations (Japanese only)