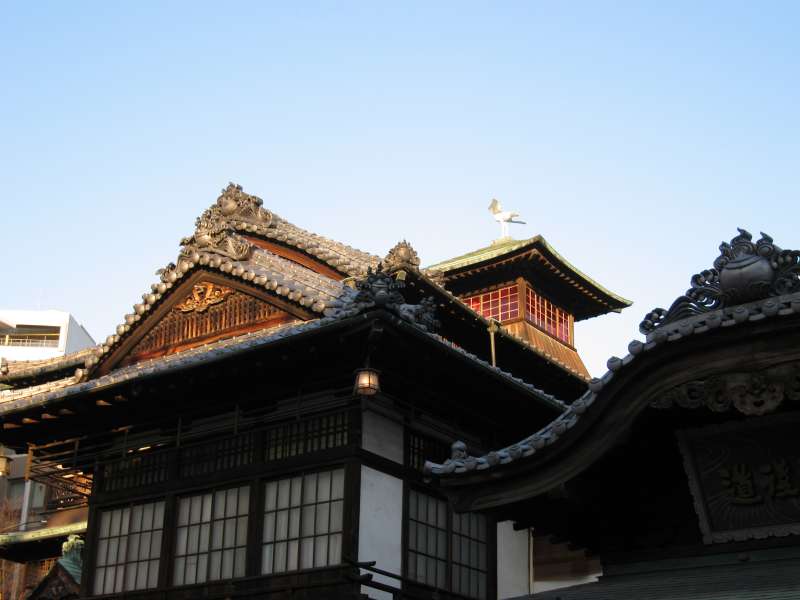 Honkan, or the main building of Dogo Hotspring, which was built in 1894. On top of the roof stands a white heron, which is the symbol of this spa. This spa has been awarded a three-star rating by the Michelin Green Guide Japan since 2009. 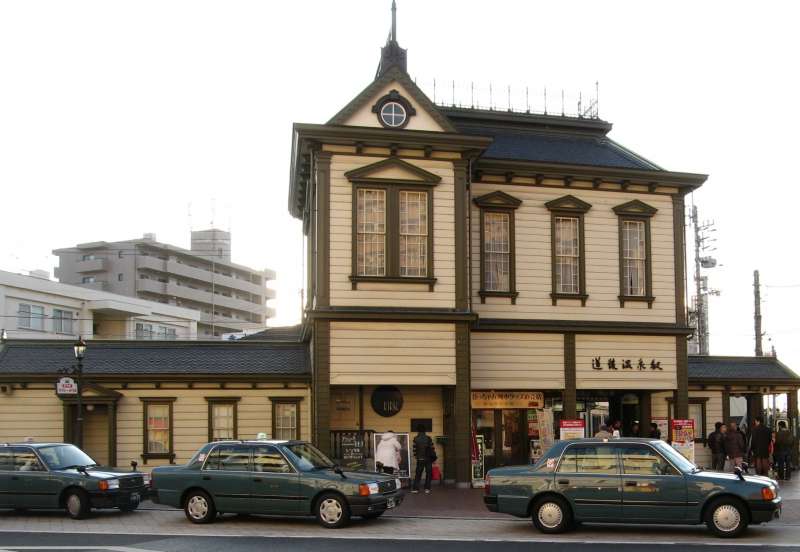 Dogo Station, which was built in 1895 and reconstructed in 1986, keeping its original structure and atmosphere. 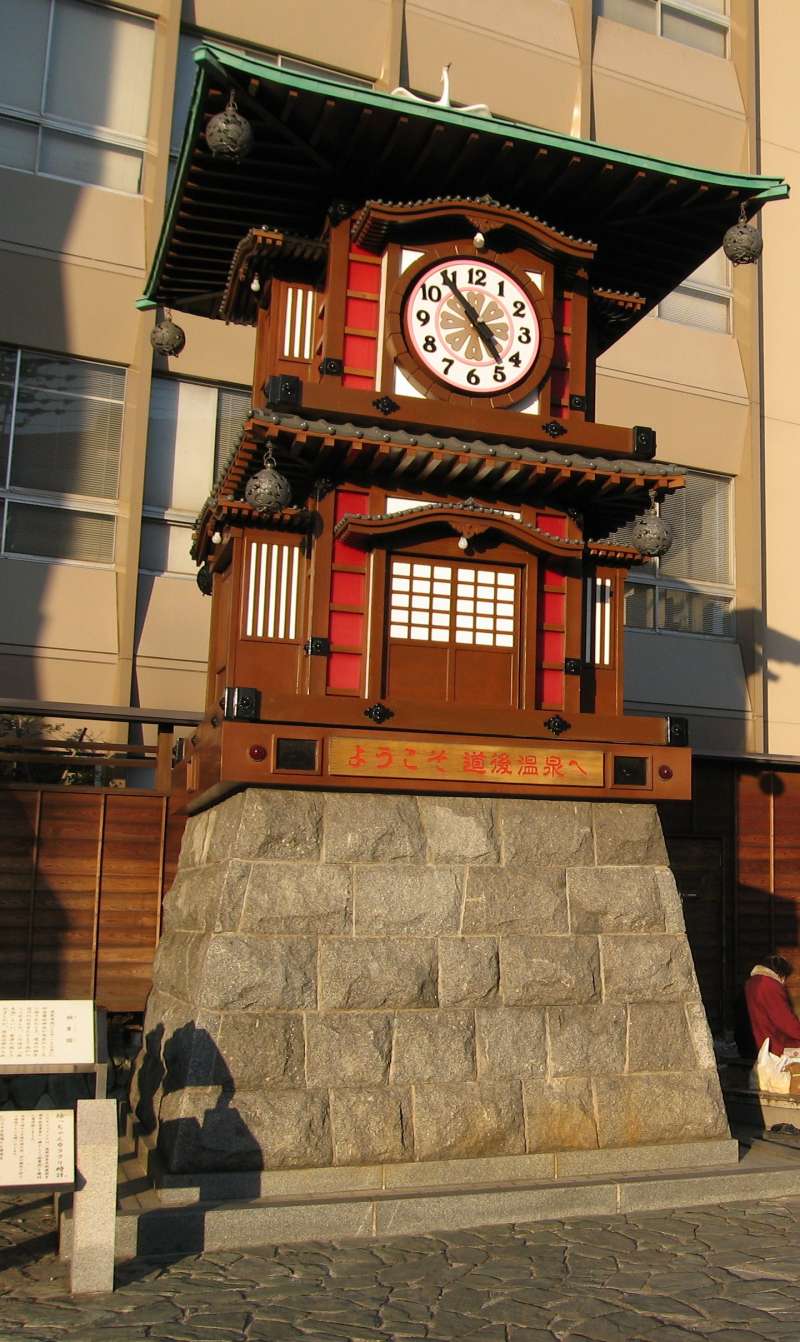 This is a mechanical clock called Botchan Dokei. This is located in a square just in front of Dogo Station. A very popular object. People can use the place around here as a meeting spot. 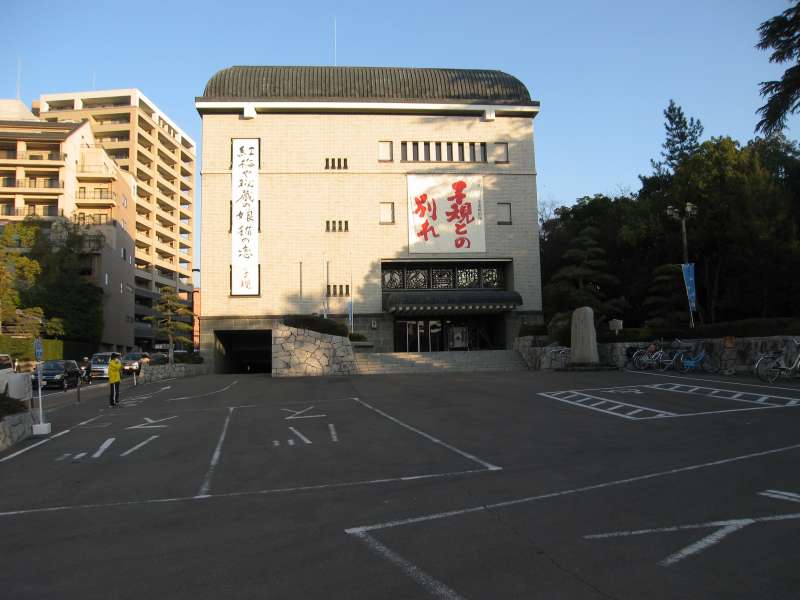 Shiki Memorial Museum. Some haiku monuments stand in front of the building. In the entrace lobby there is always a small exhibition and a small shop selling unique items related to haiku poetry. 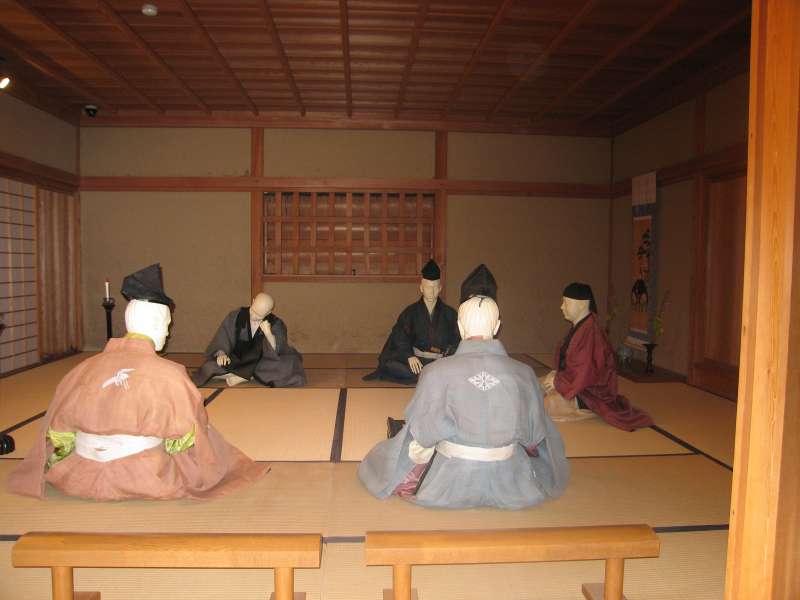 A house depicting a samurai residence in the 16th century. People are enjoying composing "renga" ,or linked verse, from which haiku poetry came. What samura did in those days was not limited in martial arts. Many were good at literature. This is located near Shiki Memorial Museum. 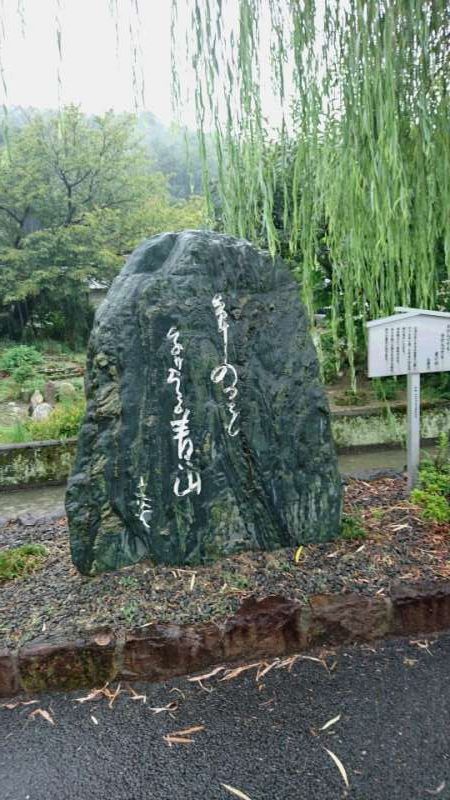 Along the way from Dogo to Ishiteji Temple, you will find some haiku monuments. This is one of them. This monument is built for a famous poet Santoka Taneda, who is said to have been a wandering poet because of his life style. He was not born here but settled here in his final days and died here. Today there are many who love his haiku. The haiku inscribed here reads in Japanese, "wake ittemo, wake ittemo, aoi yama." Its meaning is, "deeper and deeper, moving into the area, yet I am still green mountain." This is typical of his style. A weeping willow suits well at a river bank. 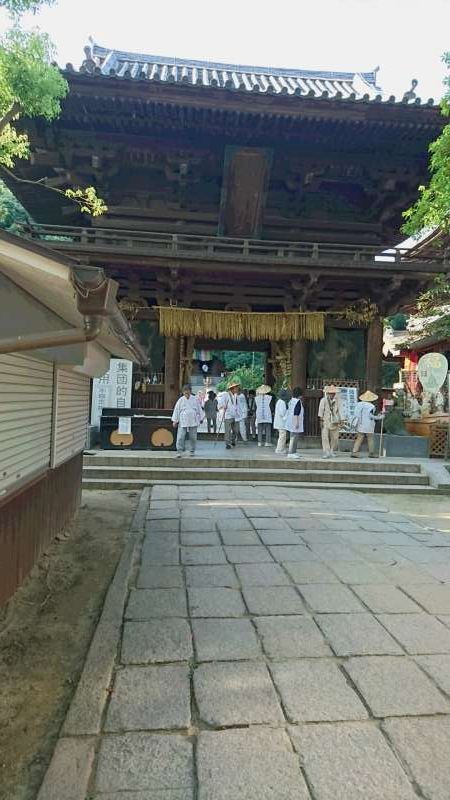 Nio-Mon. The gate of Ishiteji Temple, which was built in 1318. It is a national treasure. The two deva kings, or guardian gods, stand on both sides. They are said to be the works of Unkei, a famous sculptor of the 12th century. One on the right side with the open mouth symbolizes birth or beginning, and the other on the left with the closed mouth signifies death or end. 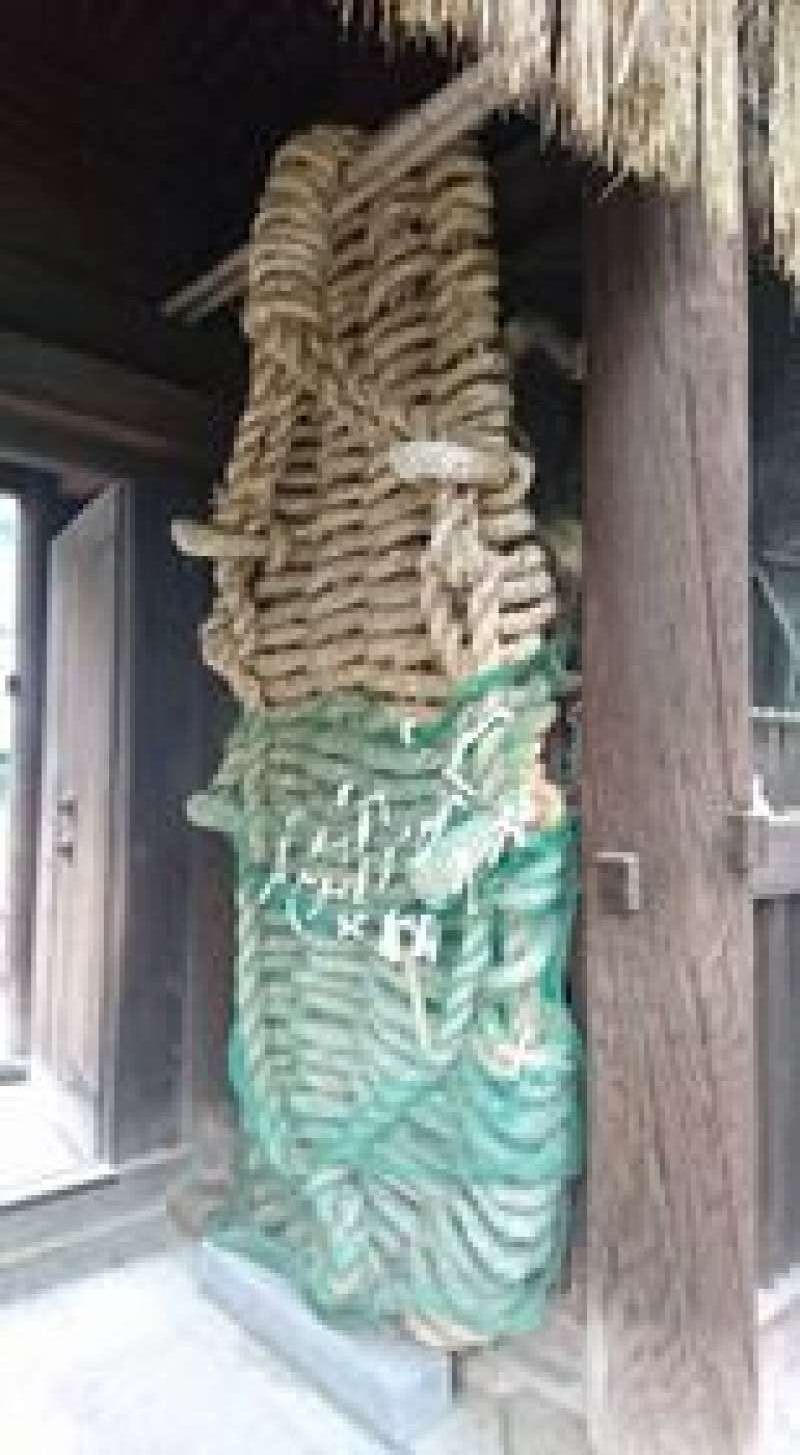 A big sandal. it is believed that a big sandal brings you strength if you touch it and touch your own legs. Every four year, in a leap year, a sandal is burned and replaced with a new one. It takes 3 days when 30 people are engaged in making the sandal. The as produced when it is burned is held by people as an amulet for good health. 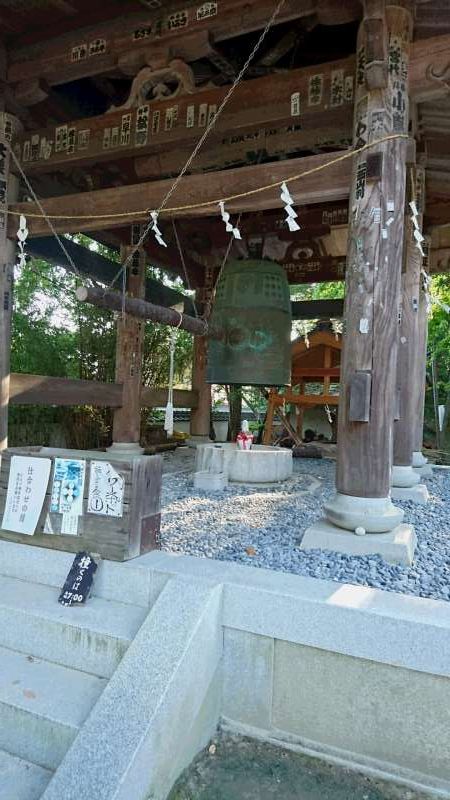 Shiawase-no-kane, or the bell of happiness: The sound of the bell is beautiful. Some haiku come from the sense of hearing. 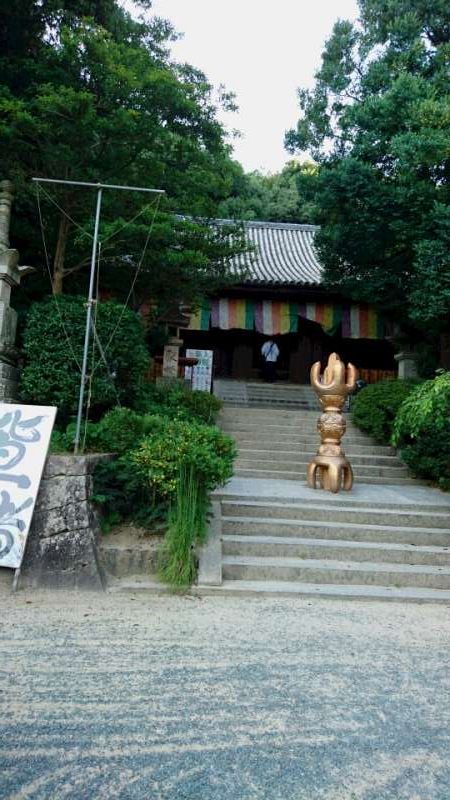 The main hall, a national important cultural property. The main image is Yakushi Nyorai, or the Buddha of Healing. 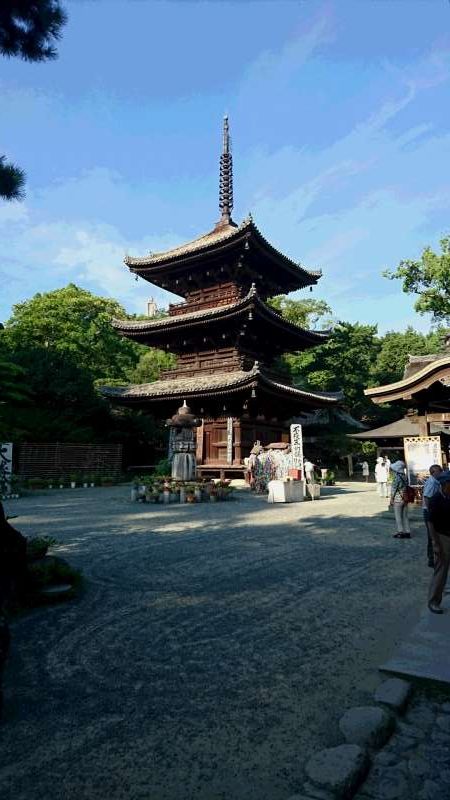 The three-story pagoda with fine proportion. This was built in 1318 with no nails used. 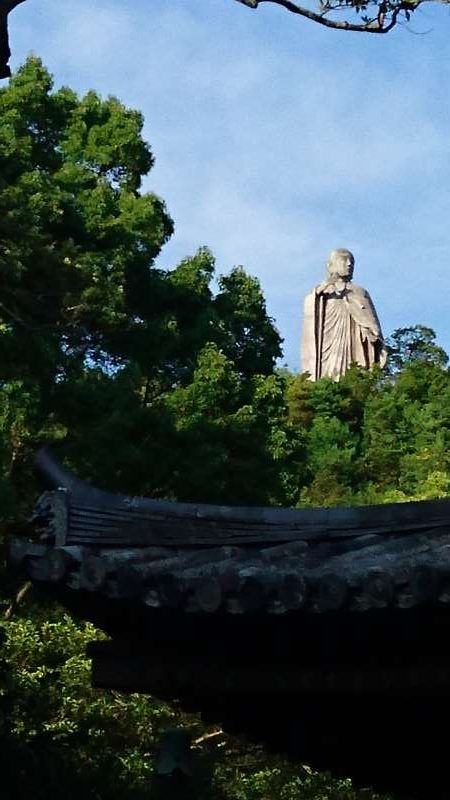 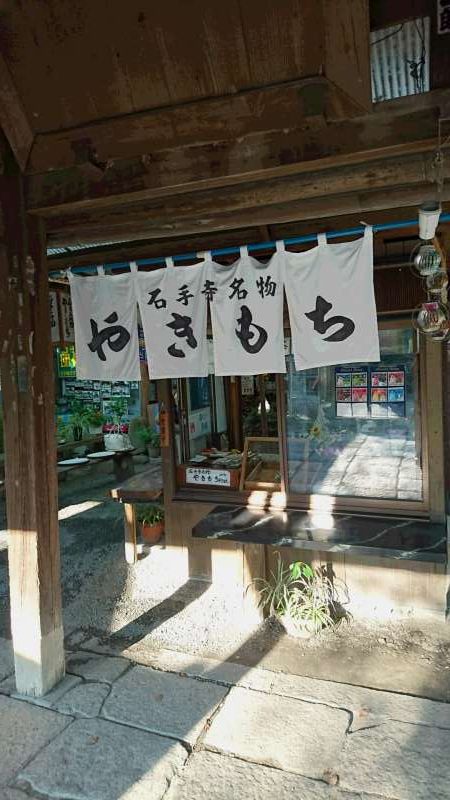 Yaki-mochi, or baked rice cake stuffed with sweetened bean paste. Two cakes for 140 yen. It is a must here. There are many pilgrims who want to eat something sweet because they are tired after a long walk. 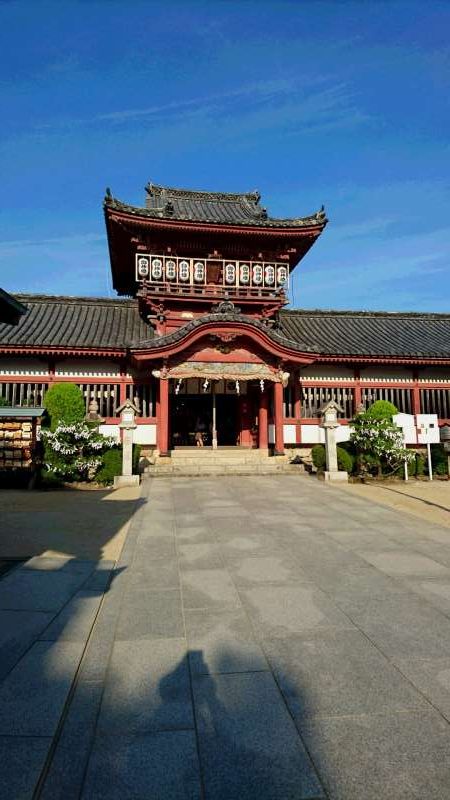 Isaniwa Shrine. The oldest records tell us this shrine was established in the 10th century in honor of Emperor Chuai and Empress Jingu. 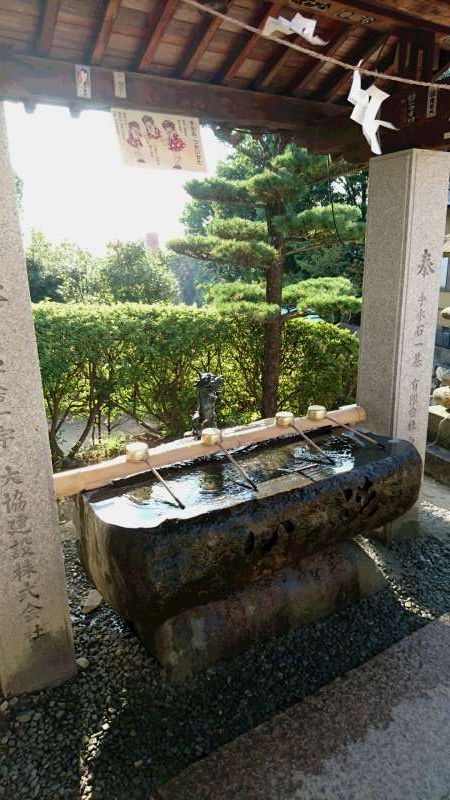 This is a washbasin. The water is used for purification of your body before standing in fron of the deity. Rinse your mouth and wash your hands. 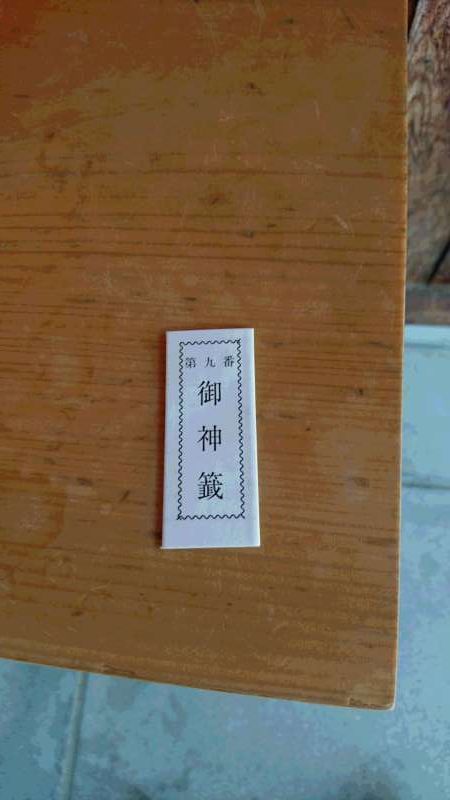 This is omikuji, or a fortune slip. You can get to know your fortune in the near future for 100 yen. 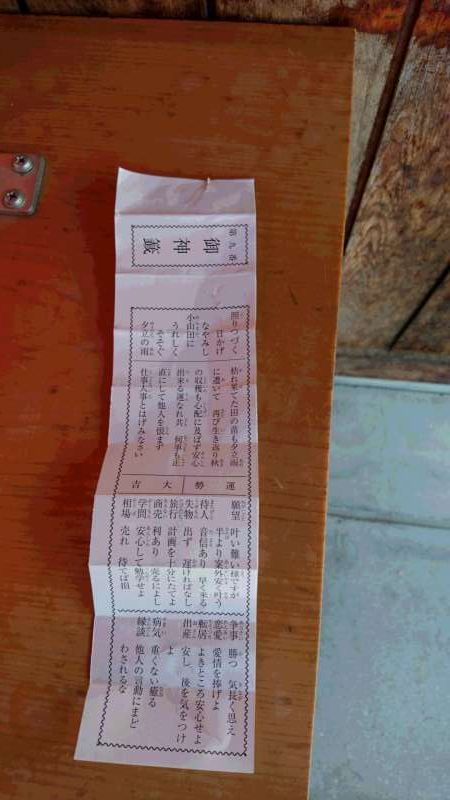 My fortune is very good luck. And the deity tell me as follows. Your wish: although you think your wish seems to be difficult to attain, it may be realized more easily than you think. Your love: devote your love to the fullest to your partner. 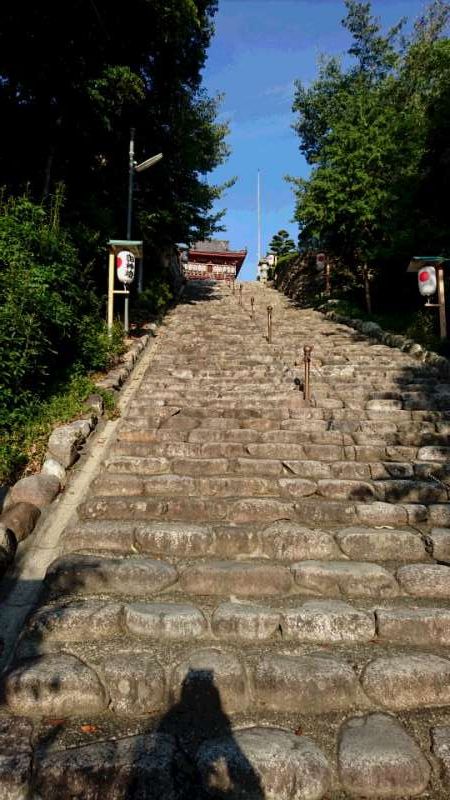 The shrine is located on a hill. Usually people have to climb up many stone steps. Fortunately the guests of my tour can get down to the foot. The best spot for your taking photos. 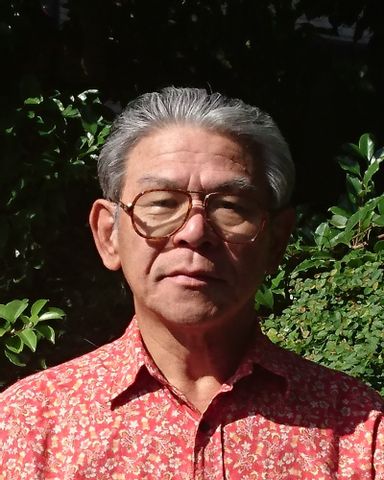 You can sense a peaceful but lively atmosphere of the Dogo Hot Spa. Your five senses needed for haiku appreciation will be sharpened. And people' dedication to Buddhism will be felt.

Feel free to personalize this offer with Kaz. 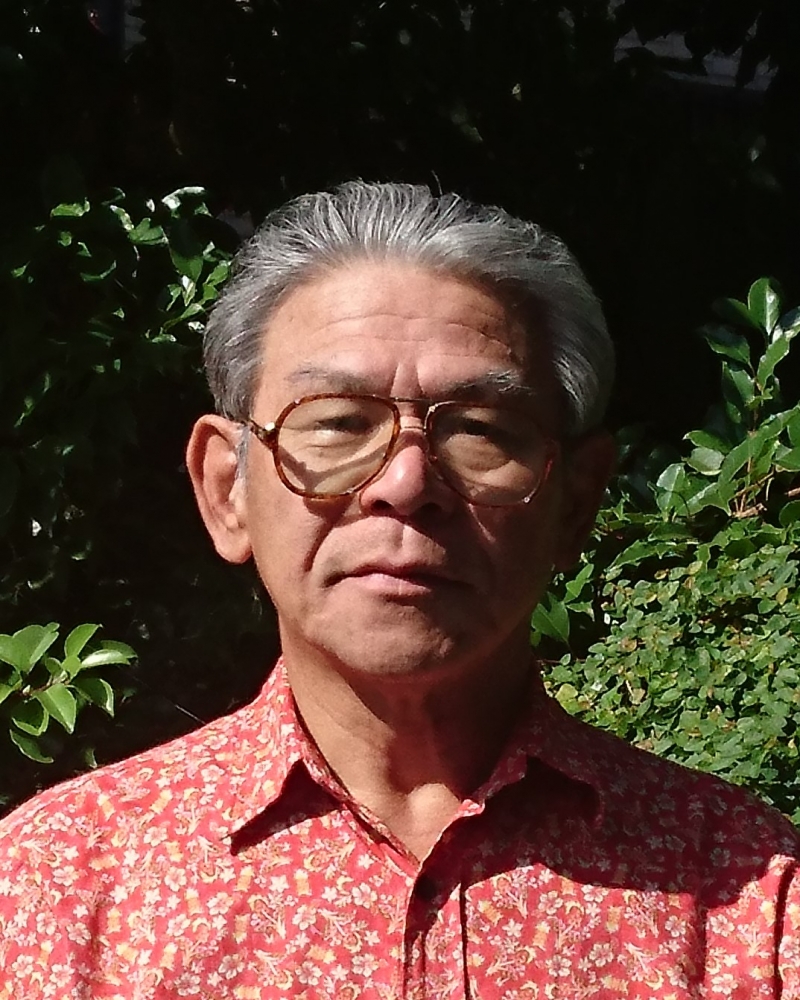 The taxi fare( Your hotel is not in the Dogo area, and when you want to be picked up at yur hotel.)

I can guide you at other areas in Shikoku, if you would burden my travel expenses. The expenses are, for example, 8,000 yen at Kochi.

You should be sturdy enough to walk on the way to and from a nearby temple Ishiteji Temple, starting from Dogo.

If you want to be picked up at your hotel, it's possible. The hotel is not in the Dogo area, we should use a taxi. And you should pay the fare. And the time needed for us to reach the Dogo area is not included in the tour time of 3 hours.

Basically, the tour is desigend for the people up to 4. But the number will be actually extended to 9. The difference is that you have to pay another taxi fare if you wanted to be picked up at your hotel which is out of the Dogo area.

We had a great guided tour given by Kaz in Matsuyama. He had a challenge of making the tour interesting for teenagers all the way up to a 79 year old!.. He met the challenge with great enthusiasm, and as a result we saw parts of Matsuyama that we would not have seen on our own, I believe not even some locals know what we experienced. Thanks Kaz!

Thank you for your message to me, Simon. I also had a good time with you and your family members. What you were interested in led to us to a local sake brewer, which began its operation 1bout 120 years ago, and to a cozy garden of the most prestigios inn hotel in Matsuyama with a history of about 400 years. These are the spots they don't visit in a usual tour. As you said, among local people there are few who are so aware of these as you are. I hope you will come to Japan again some day in the future. Finally, please send my regards to your family. Thank you very much again, Simon !

Kaz was very helpful, reliable, well informed and responsive. A pleasure to have as a personal guide in unknown territory.

Thank you very much, Bob. I think you could stay in Ehime at a good time becuase it was just around the autumn festival day in Matsuyama. I hope you will visit Shikoku again in the future.

We had an awesome time with Kaz. We were able to see quite a lot and Kaz was very informative about the places we visited. Highly recommend!

Thank you very much for your message, Chelsea. The tour was not a long one,a half-day tour, but I think you could experience good places in Kochi. Now a big typhoon is attacking Japan. It is lucky for you that you could avoid it. The T-shirt your mother gave me at the pier suits very well. Please send my best regards to her. I would like to say again, thank you very much for having a good time with me.

Dogo Hot Spa and Its Vicinty With A Haiku Poetry E...