Five of the Biggest Aquariums in Japan

Japan is a country that prides itself on fish. So, whether you are traveling around the island of Okinawa, or heading over to Kyoto or Osaka, or even if you are staying in the area around Tokyo, there are plenty of aquariums for you to enjoy all over Japan: 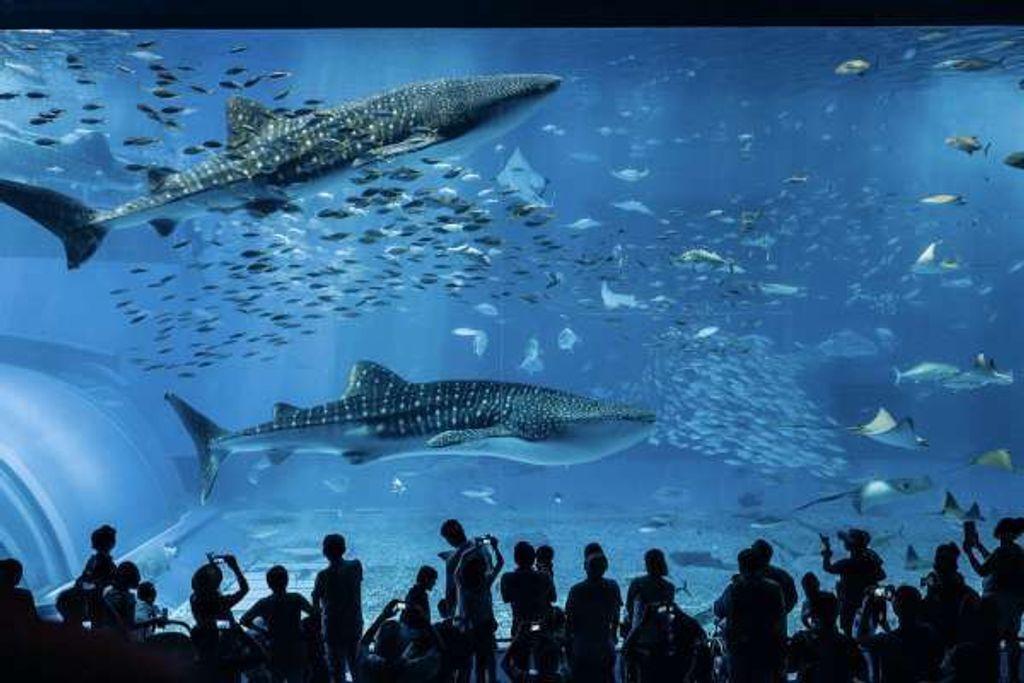 Located approximately 2 hours by car from Naha Airport, Okinawa Churaumi Aquarium is on the Motobu Peninsula in the northern part of Okinawa Island. This area which faces the beautiful sea was once the venue for Expo ’75. In the distance, you can see Iejima Island. The aquarium, which has the theme of “Encounter the Okinawan Sea”, can be entered from the 3rd floor (Coral Lobby), and heading to the 2nd and 1st floors, the facility is built so that it feels like you are going underwater. In fact, it has been designed so that you can get the sensation of taking that mysterious trip into the Okinawan sea as you go from Life In Inoh to the Coral Sea, past the Kuroshio Sea to the Deep Sea.

The No. 1 highlight of Okinawa Churaumi Aquarium is the Kuroshio Sea which is the largest water tank in Japan. Boasting a depth of 10m, a length of 35m and a width of 27m, this gigantic tank is filled with migratory fish from the Kuroshio, including 3 whale sharks and 6 manta rays. This multiple breeding for the purposes of propagating whale sharks and manta rays is something that hasn’t been seen anywhere else in the world. At the water tank known as the Coral Sea which lets in natural light, 800 colonies of 70 different coral are bred and are on display, a process that has taken more than 10 years. You can also view the coral spawning every year around June.

After enjoying the world of the Okinawan sea, why not take a break while still being able to see the sea life in the tanks up close? At the Café Ocean Blue at one corner of the Kurashio Sea, you can enjoy some tea and light snacks such as taco rice and purple yam tarts which are Okinawan specialties while viewing the whale sharks and manta rays swimming gracefully. The sight of fish swimming across in front of your very eyes is amazing. Since the seats in front of the water tanks are always crowded, heading for them as soon as the aquarium opens is recommended, although after 4 p.m. the crowds lessen somewhat. 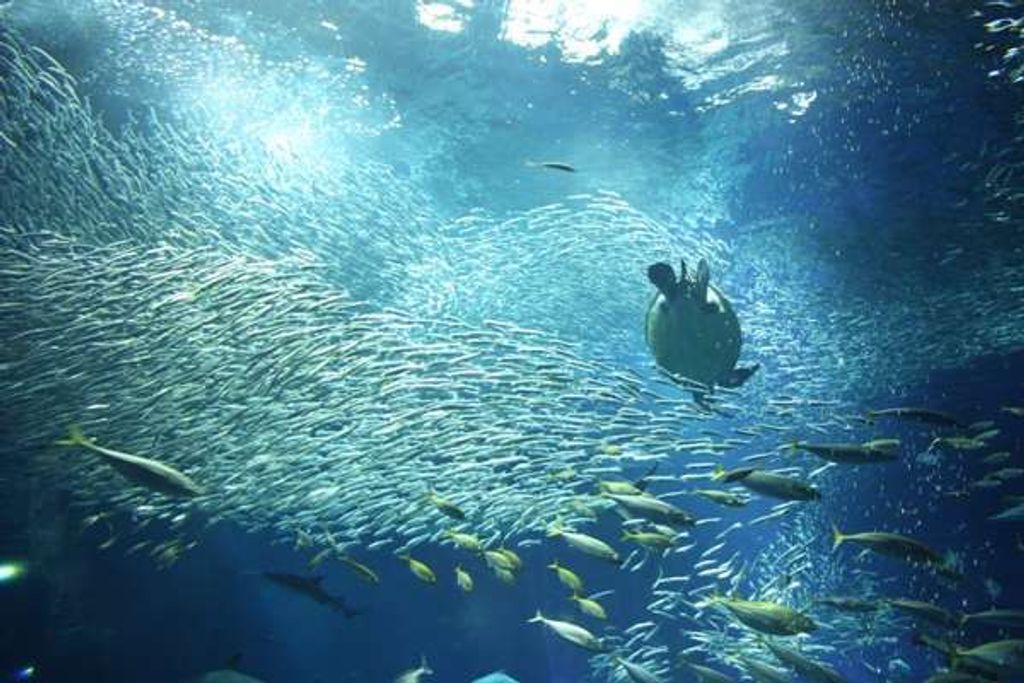 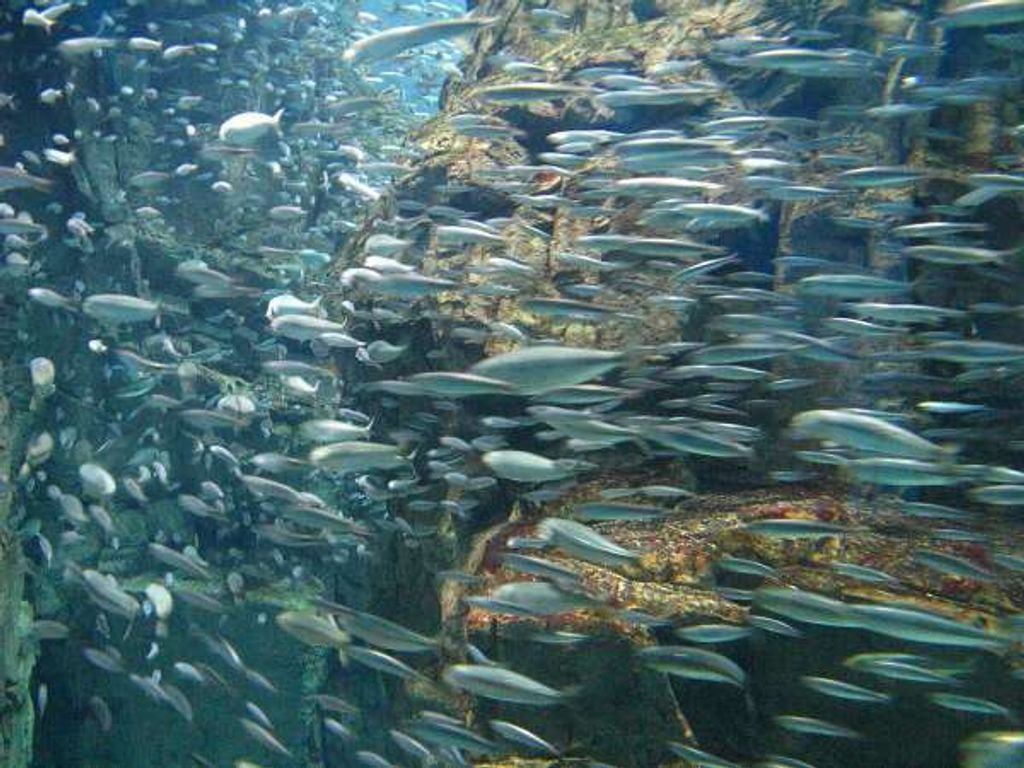 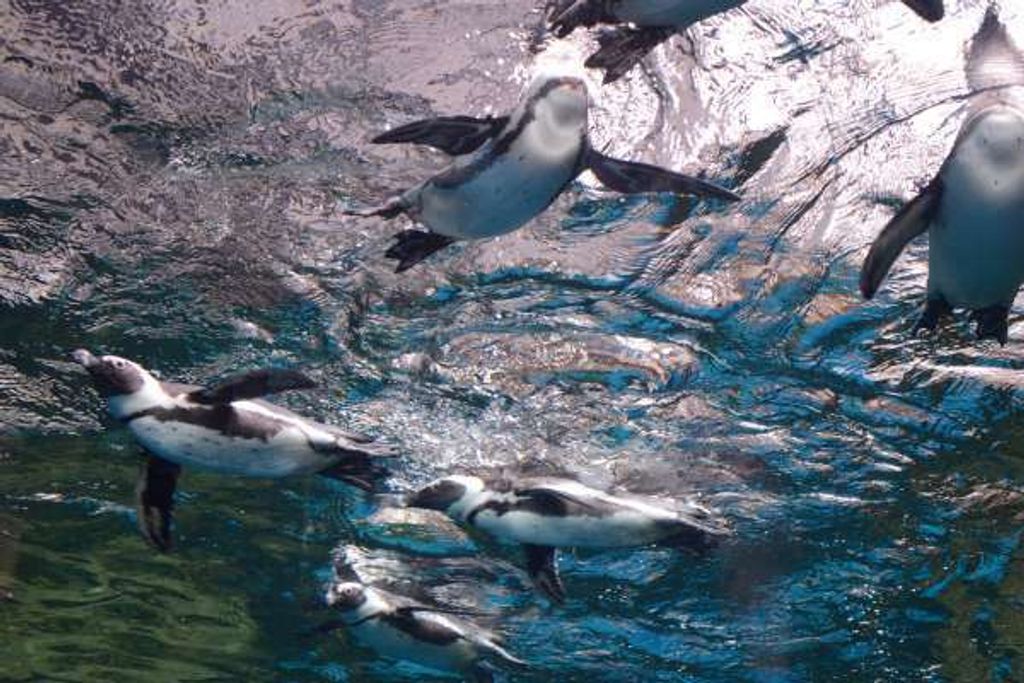 The aquarium is located 15 minutes away on foot from Kyoto Station’s central exit. Kyoto Aquarium is located in the popular urban oasis of Umekouji Park. Within the facility, you can start from the Main Pool where you view sea life from 7 spots including a cave and a fish-eye lens as one of the 9 exhibition zones. With a five-storied pagoda far off in the distance, you can also enjoy the dolphin show. You may be thinking “Why would I head for an aquarium in the 1000-year-old former capital of Kyoto?” However, you can deepen your knowledge about Kyoto from a different angle from history and culture.

First on the menu are the two different water tanks with motifs of the Kamo and Yura Rivers. At this Rivers of Kyoto Zone, the nature of Kyoto is realistically recreated. Of note inside are the living fossils of Japanese giant salamanders which have been designated as the nation’s Special Natural Monuments. You can witness these animals which are native to the Kamo River flowing within Kyoto. There is also the Kyoto Woodland Zone which recreates the woodland area just outside of Kyoto. You can see the unspoiled landscape from the good old days of Japan with animals such as catfish, carp and frogs living in the terraced rice fields and irrigation canals. 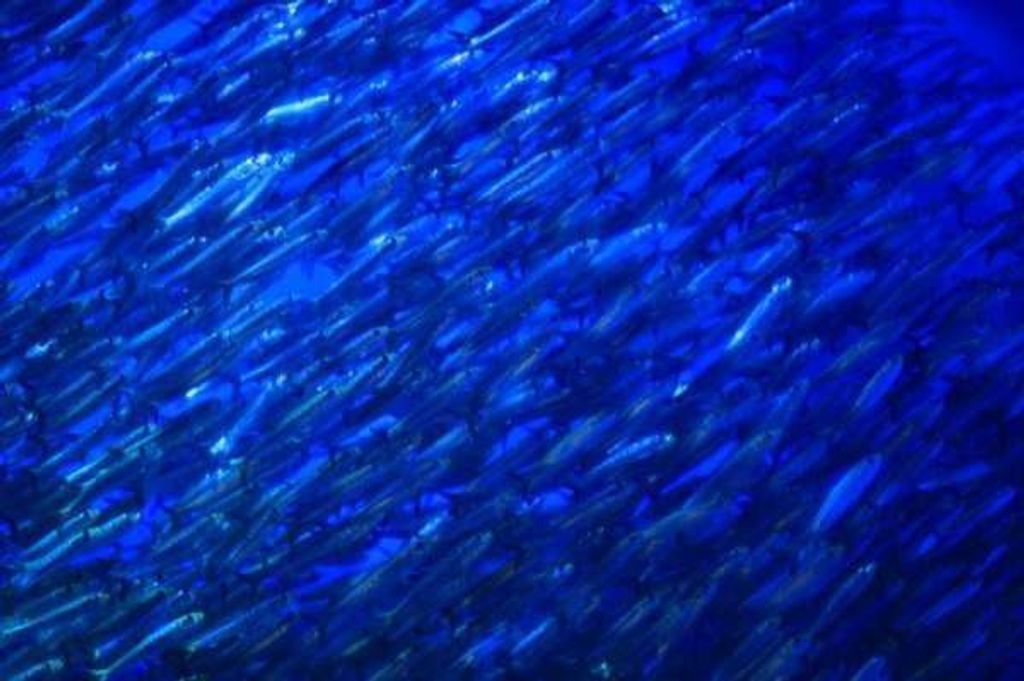 Do you want to have a better experience in Japan?

Aquariums are one of the cool experiences you can have in Japan, but there is a lot more.  For this, it is good to have someone that has knowledge about the place and about your interests and make your trip to Japan even better.

Triple Lights is a company that wants to help tourists in Japan to have a better experience visiting the country.

It offers qualified professional private guides that help you make customizable itineraries and save your time, tours to know the best spots of an area and private cars to make your route in the easiest way.

If you want to know more about how can the company helps you, visit the website or contact one of the guides.

Blogs about aquariums in Japan