A Trip of Relaxation and Japanese Tradition in Nagano

A Trip of Relaxation and Japanese Tradition in Nagano

Last weekend it was time for me to change the hustle and bustle of fume-filled Tokyo with the serene nature, creeks and wild animals of Nagano prefecture. You might have heard of Nagano before, since they hosted the 1998 Winter Olympics. But apart from sliding down snowy hills, do you have any idea what you can do in Nagano? I, for one, did not.

But after my friend invited me, I thought I might as well find out. Thus, I found myself in the Azama Shinkansen Bullet Train on a Friday morning heading for the hills...

How to Get There

If you take the Azama Shinkansen from Tokyo station, it will take you around one hour and 40 minutes to reach Nagano station, where you transfer to a little train called the Iiyama line. This brings you to Iiyama Station in another 40 minutes. The whole trip will set you back some 8400 yen. From March 2015 they will start using the new Shinkansen line running all the way to Iiyama (and further, down to Toyama and Kanazawa). But, I recommend you take the old train of the Iiyama line at least once because it's just so cute, and the view from the train running along the river is breathtaking. 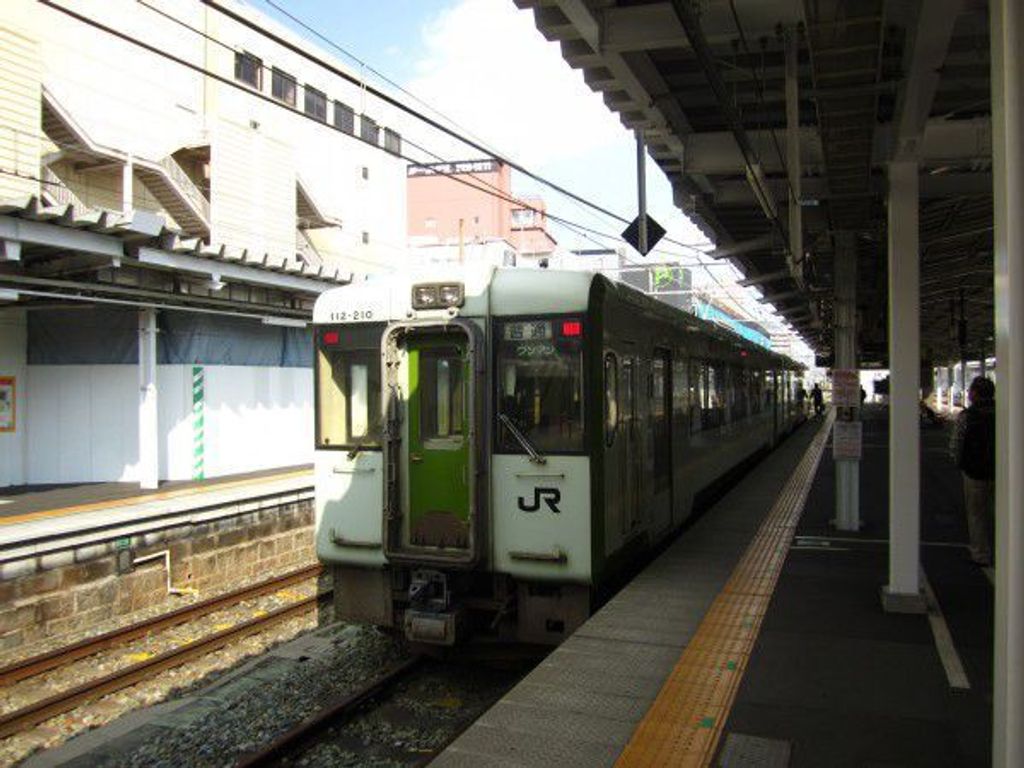 The local train to Iiyama 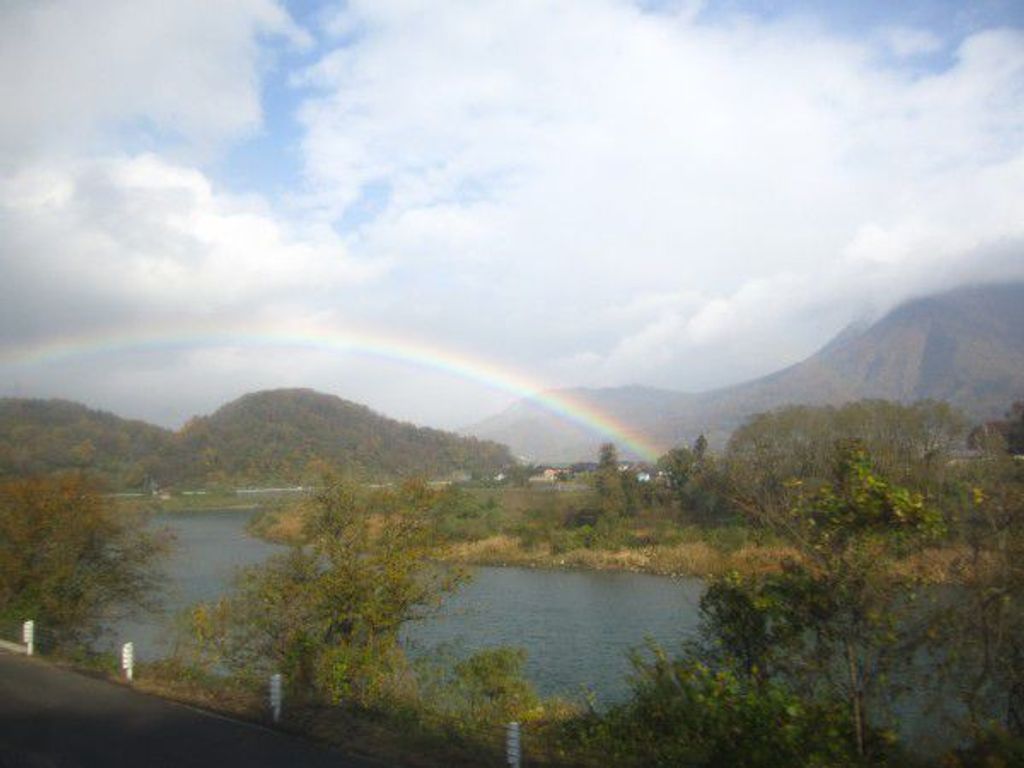 View from the local train. Note: rainbow is not guaranteed for subsequent visits.

Once we arrived at the old Iiyama station (which they actually moved out just that weekend to the new Shinkansen Iiyama station), my friend and me were introduced to the rest of the participants (4 other ladies). Then we were left under the care of four guys from the tour company, one guide and three others of whom I'm not sure what their role was... 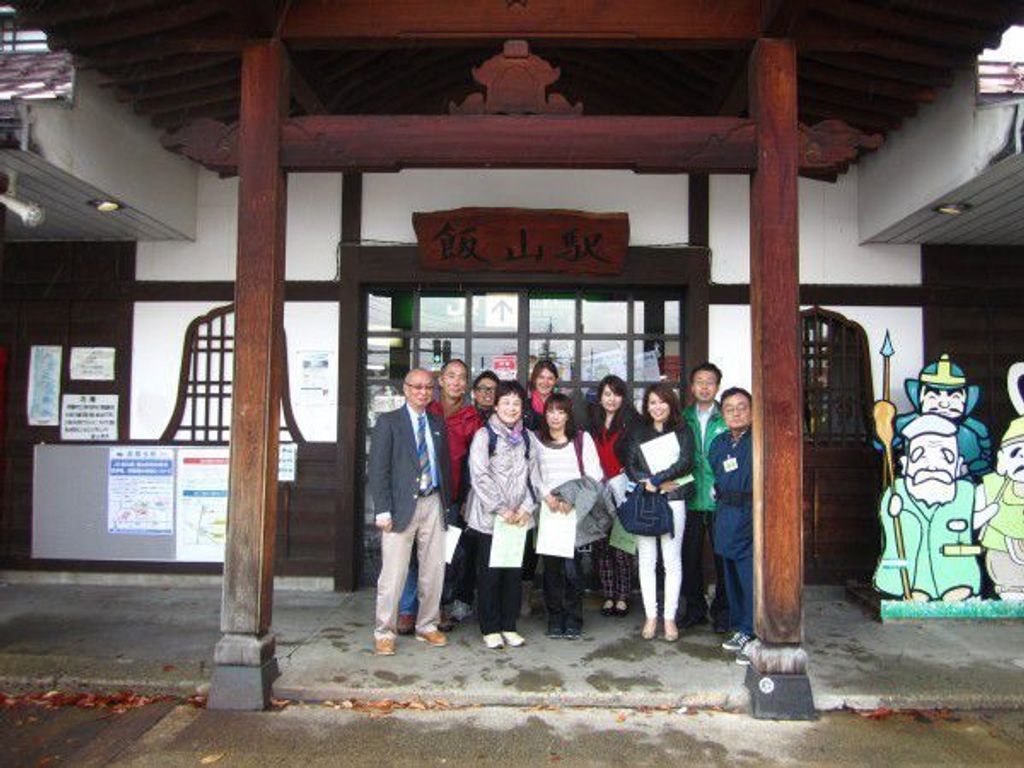 The group at the last weekend of the working Iiyama station.


In any case, we were swiftly brought around town in a little taxi, visiting the most famous temples in Iiyama (there are loads and loads of temples there!). Also, we passed a street called 'butsudan doori', or 'butsudan street' in Japanese. A 'butsudan' is a kind of Buddhist mini altar people hang up in their homes which they use to pay their respects to the deceased of the family. It is usually shaped like a wooden chest with double doors, and inside you can find pictures of the deceased person, offerings of the family (rice, sake etc) and incense. Almost all Japanese families have one in their house. There are special shops dealing in these butsudan and it so happens that 'butsudan doori' in Iiyama is lined with them. One shop after another, leaves you wondering if there are any citizens remaining to buy the butsudan if apparently so many people kick the bucket. 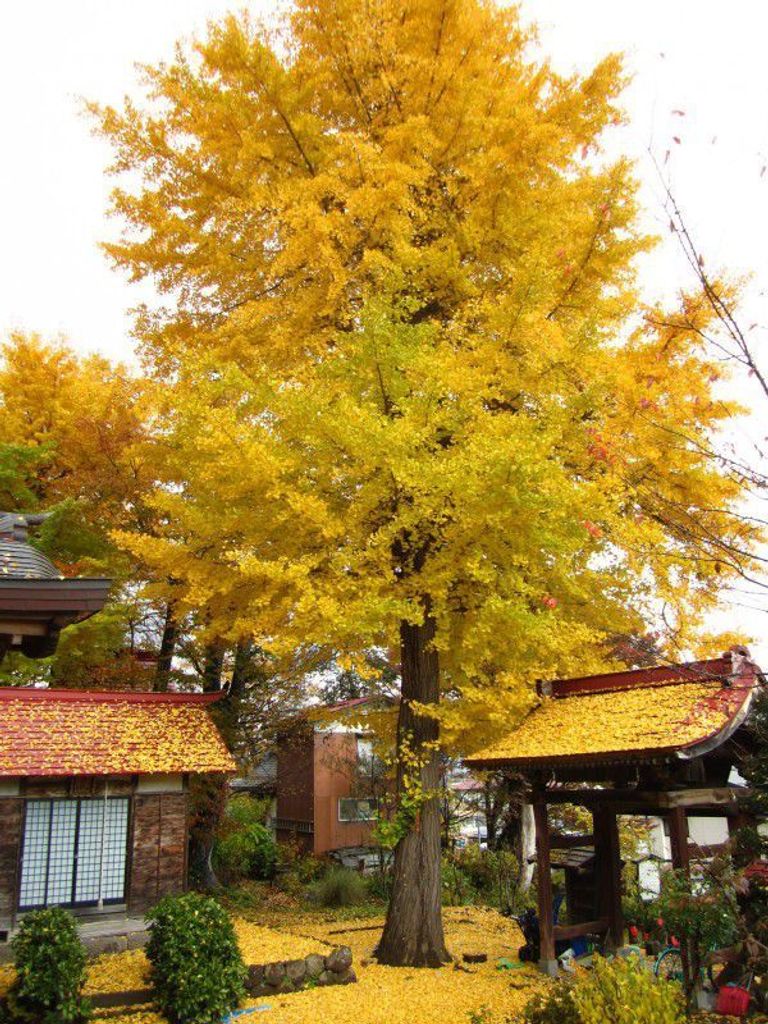 
Then, we were taken to Jofukuji Temple, where we received these cool Japanese hakama robes and were led upstairs by a smiling monk. Then it was time for part one of the soul searching bit of our trip. 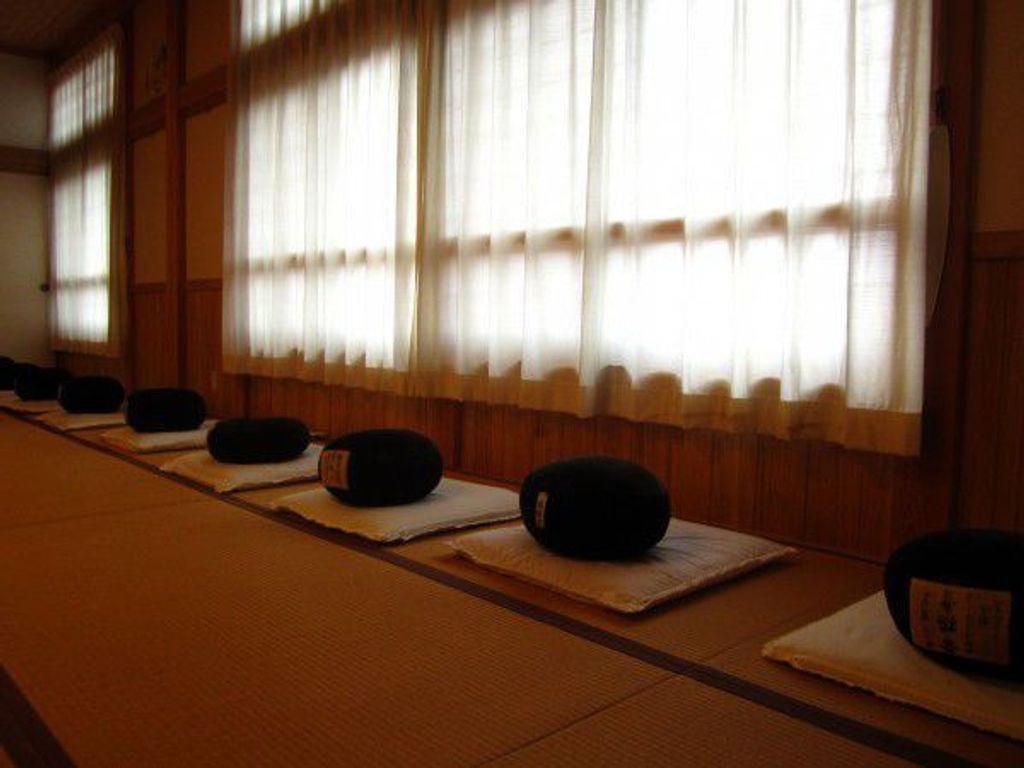 Seated on pillows which looked a bit like black cheeses, we were spoken to by the temple monk about Zen, zazen (zen meditation) and the eight plights of life. Within Buddhism, it is believed that 'life' itself comes with all kinds of suffering, pain and plights. These are inescapable and you have to accept them in order to let them go and only then these plights will not bother you anymore. It might seem like a pretty bleak outlook on life, but in fact I find it rather reassuring. It means that no matter what happens in life, everything only depends on the eye of the beholder. Therefore you can exert total control over your state of mind and never be down unless you want to be. This will of course take some training, but zazen meditation seems a good start.

It was the first time I experienced guided zen meditation, and it was a very special experience indeed. I could try and describe it in detail, but there's nothing like experiencing it yourself first hand.

The dinner of the first day was in the same spirit as the afternoon: temple food! Buddhist monks are supposed to refrain from harming other living creatures, under which also animals, so they take a meal which is completely vegan (although some sects are less strict than others). For a vegetarian, like myself, that constitutes a perfect dinner! This so-called 'shojin ryori' was really delicious and the monk of the temple where we had dinner (the temple is called Kogenin, you can also sleep there; see http://togarionsen.jp/tour/facility/kougenin.php in Japanese) was very open and talkative. 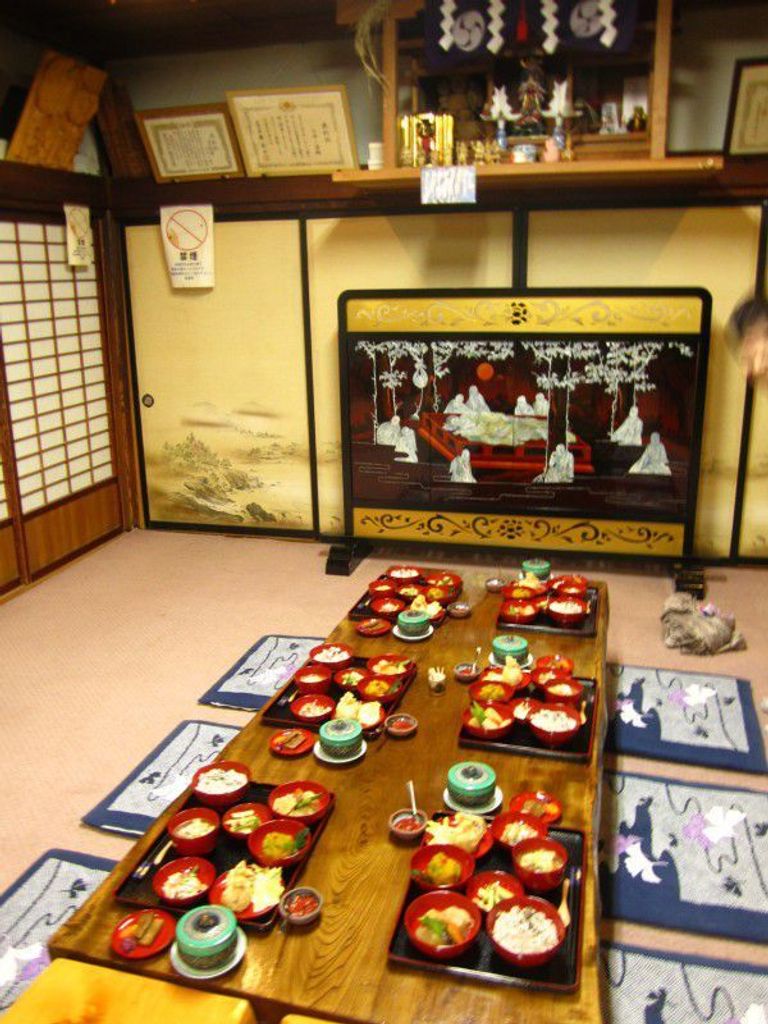 We slept at hotel Bunka Hokuryu Kan, which offers both Japanese and Western rooms. After letting the dinner sit for a while, I tried out the onsen hot bath on the top floor. The rooms don't have shower or bath facilities in them, because with Japanese guests (who love to go to onsen more than they do their own mothers) the in-room showers would probably never be used ;-) I must admit, soaking in the rooftop hot tub with natural lighting by the full moon up above, was not a bad way to spend your time at all. 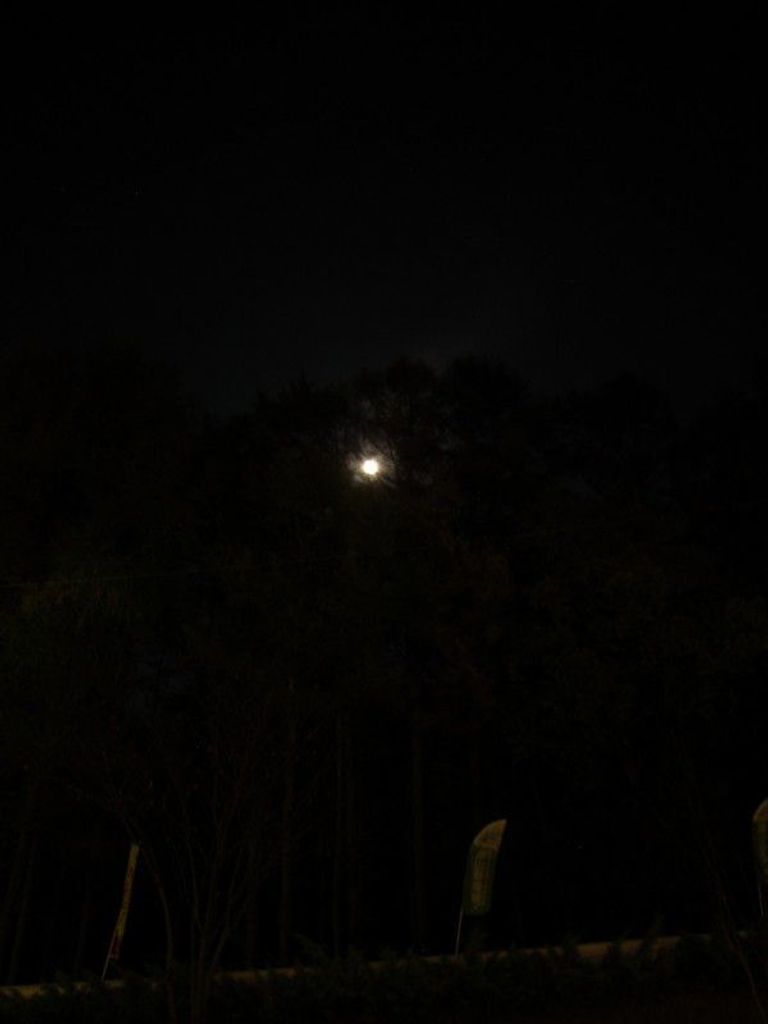 A Super Moon above the Iiyama forest

The hotel rooms: Western, or Japanese 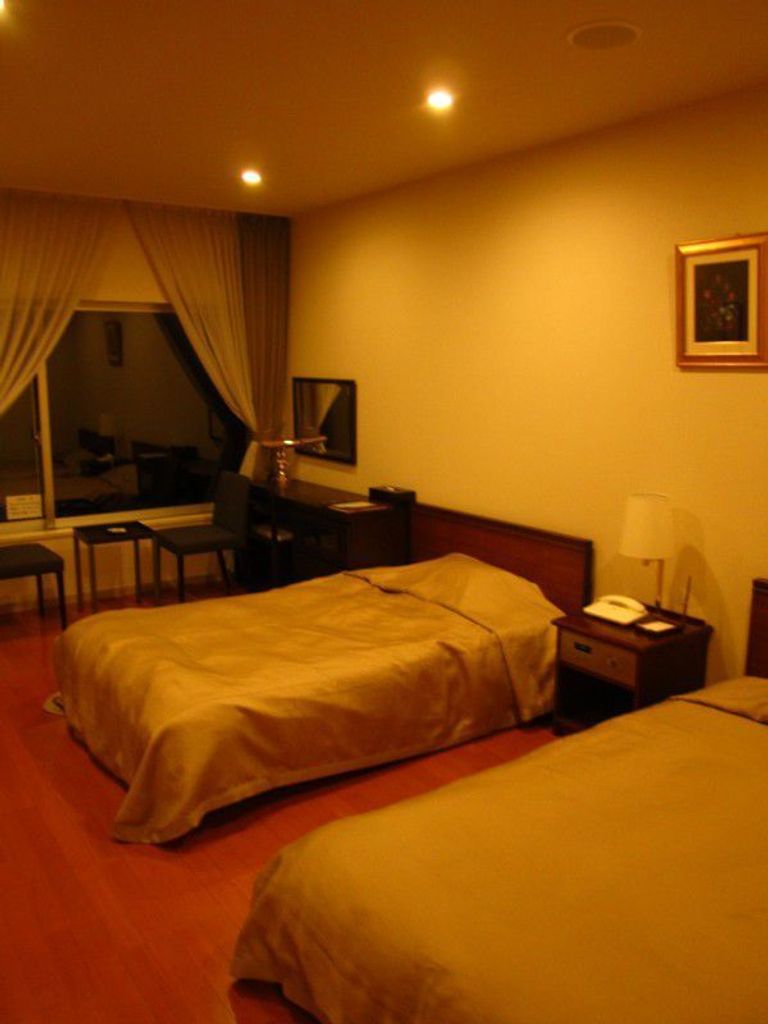 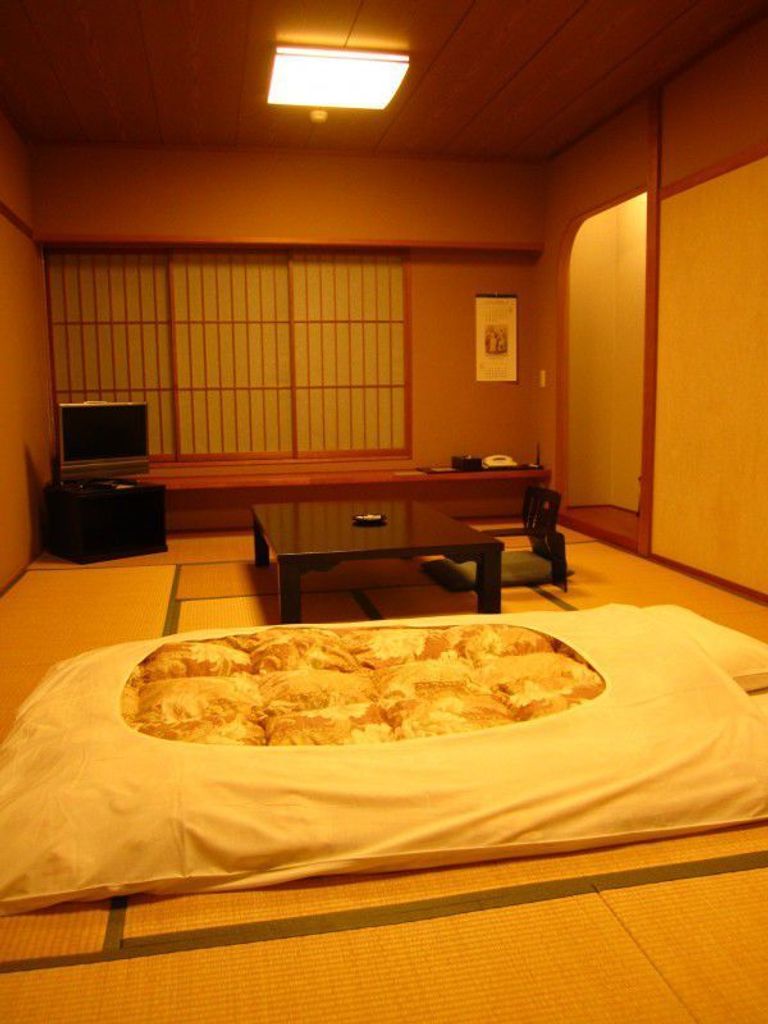 In the morning, after an vegetarian Japanese breakfast, we joined a private yoga lesson. We were supposed to do the whole lesson outside in the forest, but because it was too cold we opted to do the first half inside. Also, there are many bears in the vicinity of Iiyama, but they told us that had nothing to do with it.

When our muscles were supposedly warmed up enough, we decided to give the fresh air a try. And fresh it was. To our very bones. But, the scenery was magnificent. The lake next to our yoga place was covered in mist, which gave the whole thing a rather fairy-tale-like feel. 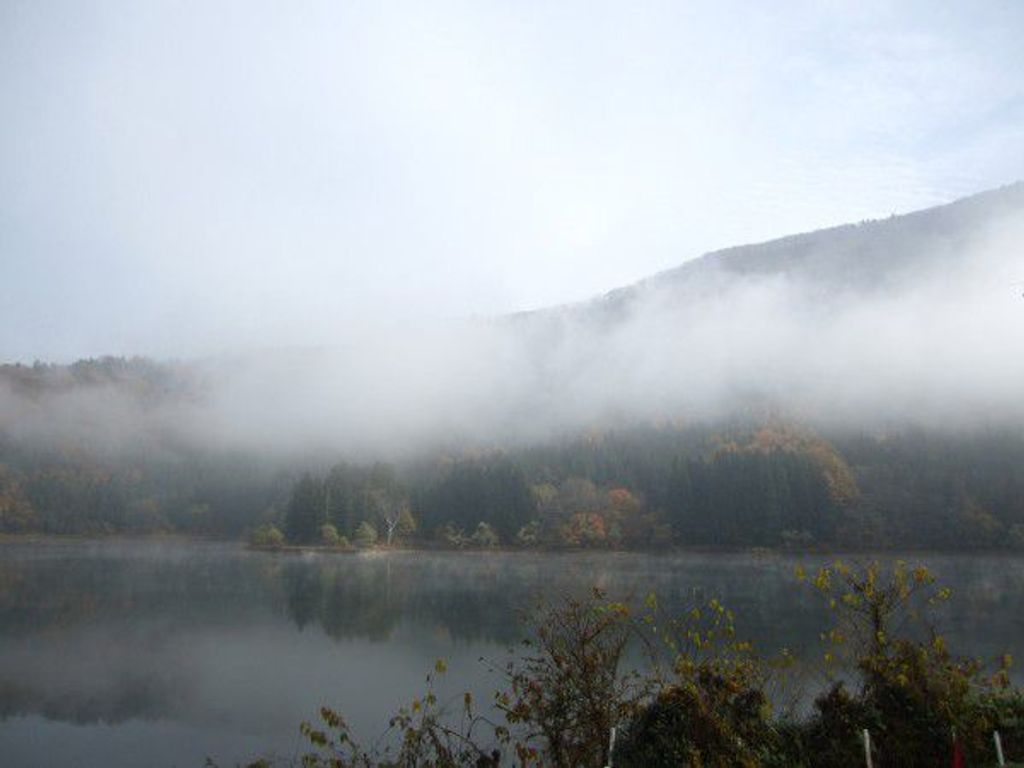 After our work out we hit the road again, up to Daishoji temple. There, another shojin ryori meal awaited us. 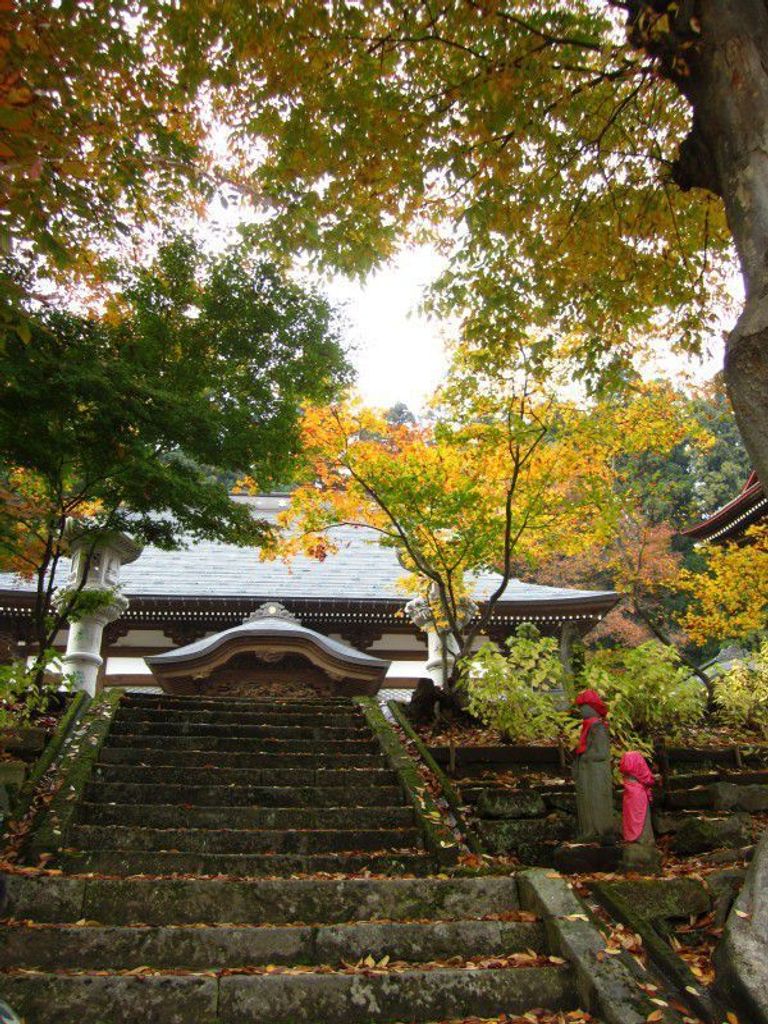 The path up leading up to the Daishoji temple 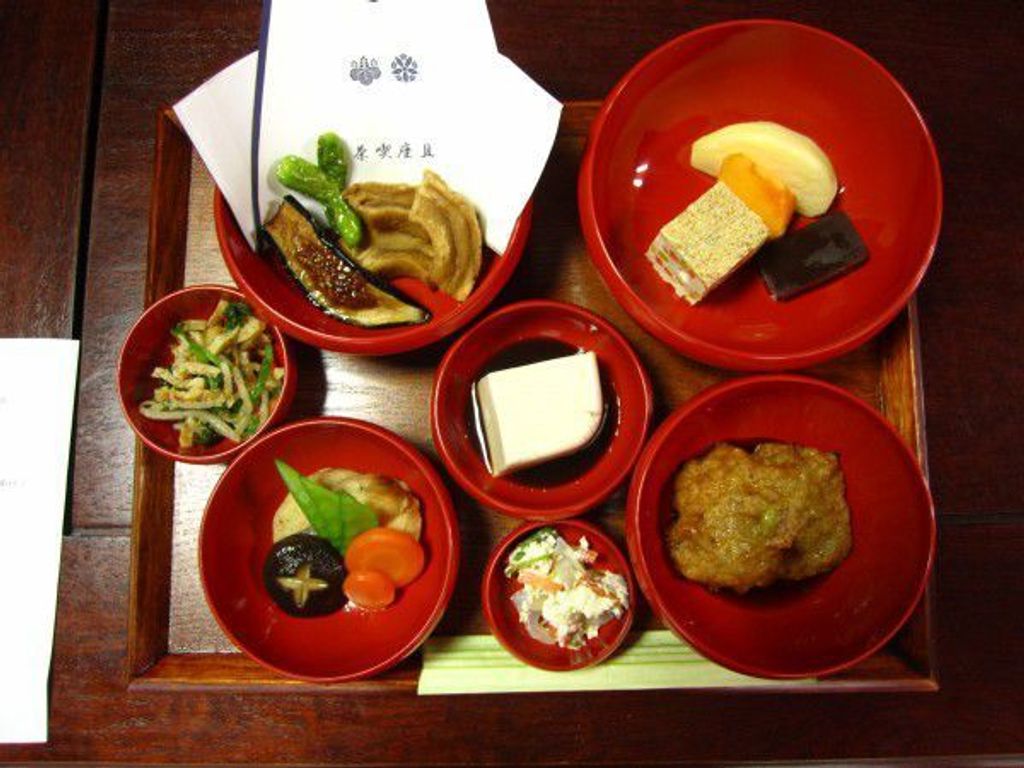 Our lunch was - again - heavenly


After the meal, we went to sharpen our artistic senses while meditating at the same time. Now that's what I call efficiency. The art of 'shabutsu' or 'copying Buddha' is basically what the words indicate: copying an image of the Buddha or a Bodhisattva on a sheet of transparent paper. You do this in total silence, and because it requires a thorough concentration, you can use it to meditate as well. After you finish, the drawings are offered to the spirit of the temple with a ritual. 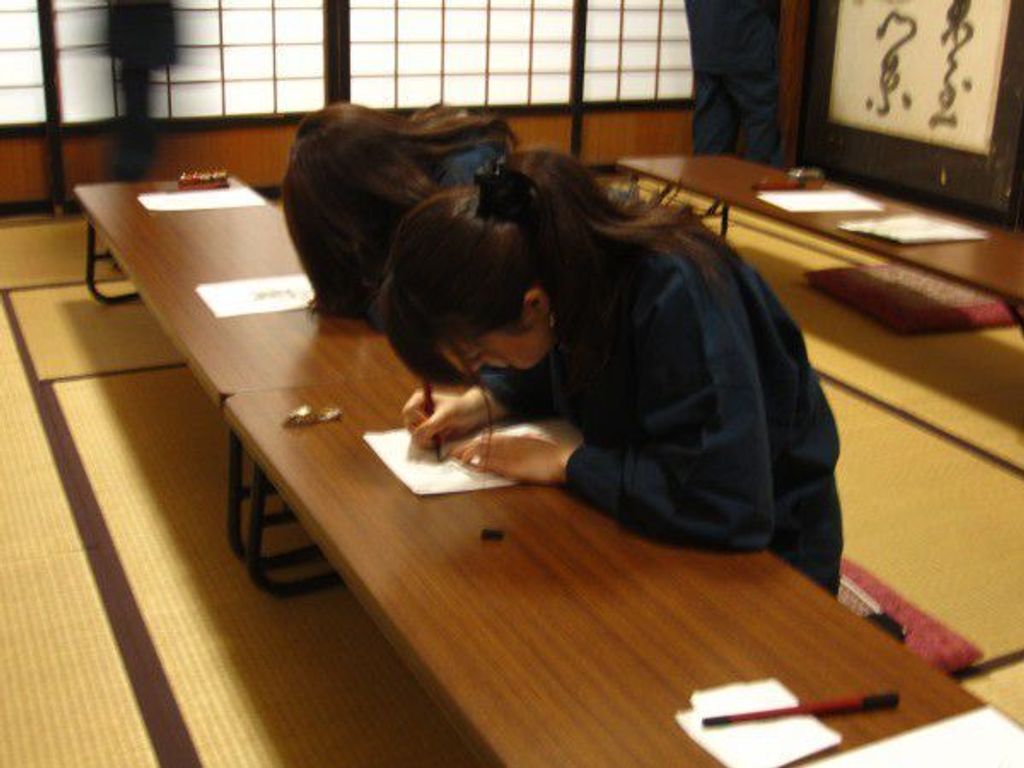 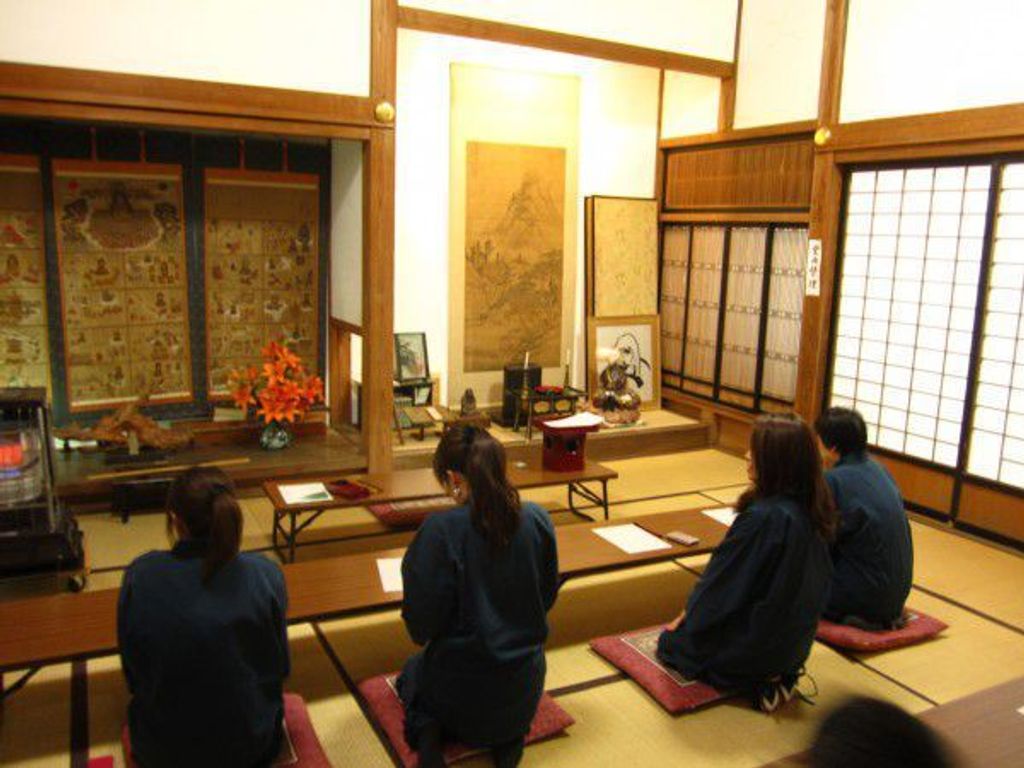 The drawing of the Buddhas and Bodhisattvas 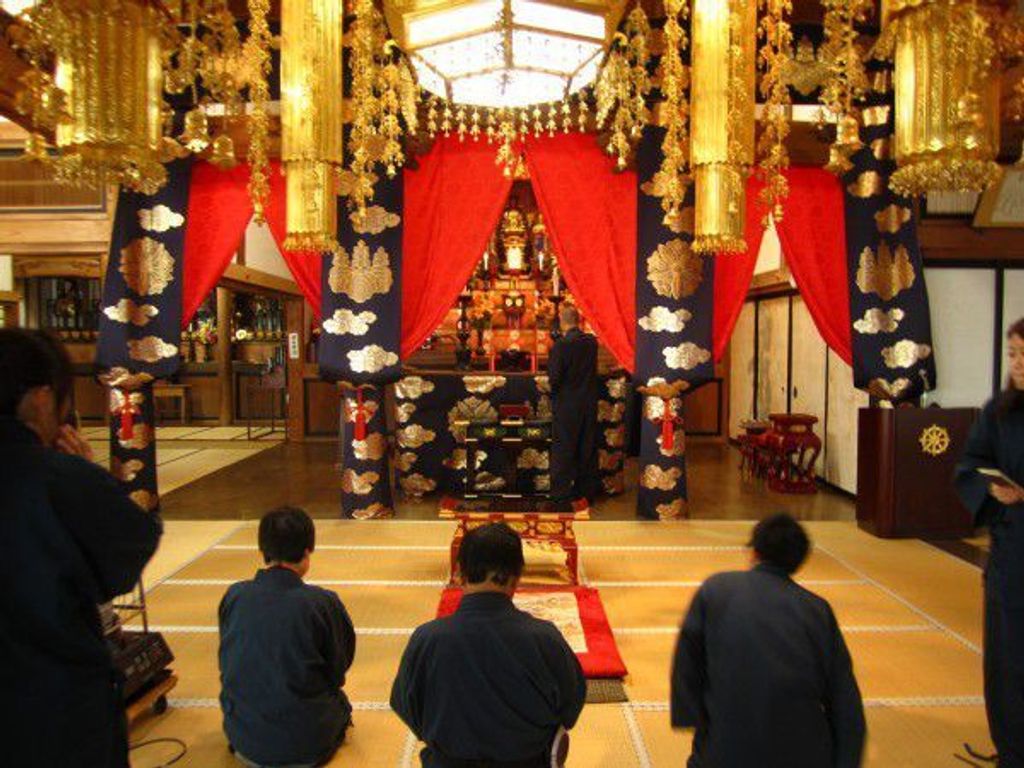 After utmost concentration, we had our drawings blessed by the temple spirit

We received our drawings, which are supposed to bring you luck if you put them in your wallet. Let's hope it works...


Time For Some Action

After this moment of silent artistic reflection, it was time for some action. 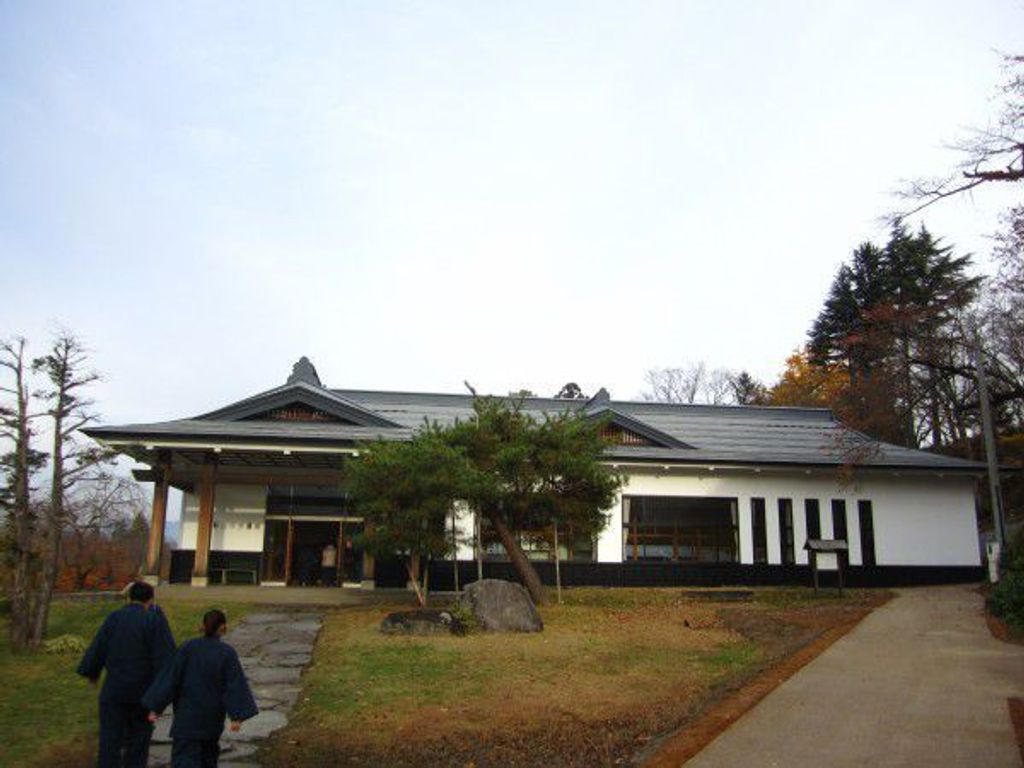 We headed to the Iiyama Kyudojo for a demonstration of the ancient art of 'kyudo', or Japanese Archery. As our sensei explained, kyudo is not just trying to hit a mark with arrow shot from an exceptionally large bow. It is a form of 'walking zen', or a meditative sport, if you will. It involves elaborate rituals and is very composed. From entering the shooting range to firing the arrows (you fire a pair of arrows in one turn) might take as much as 15 minutes. 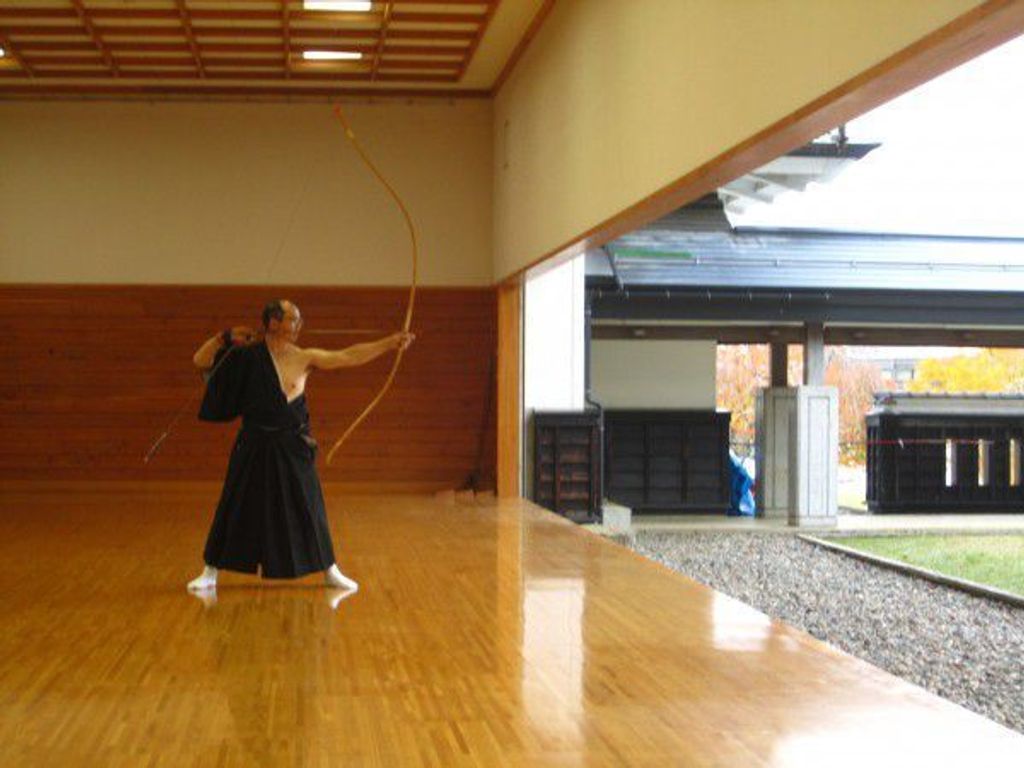 There was also time for us to take on the kyudo bow. 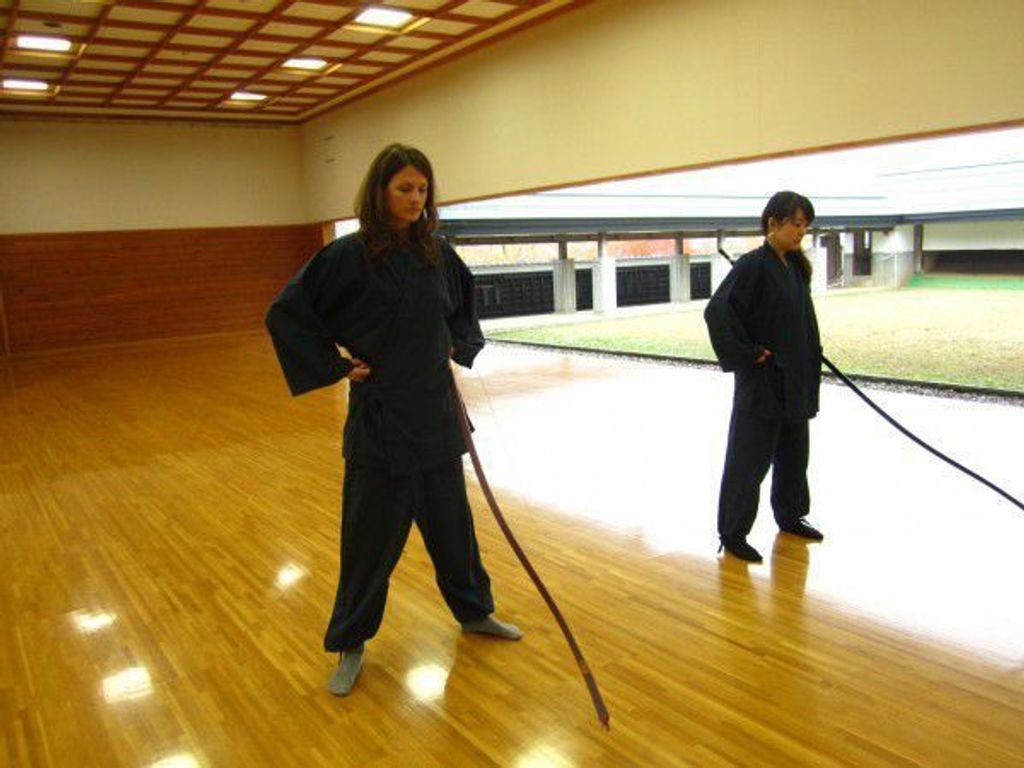 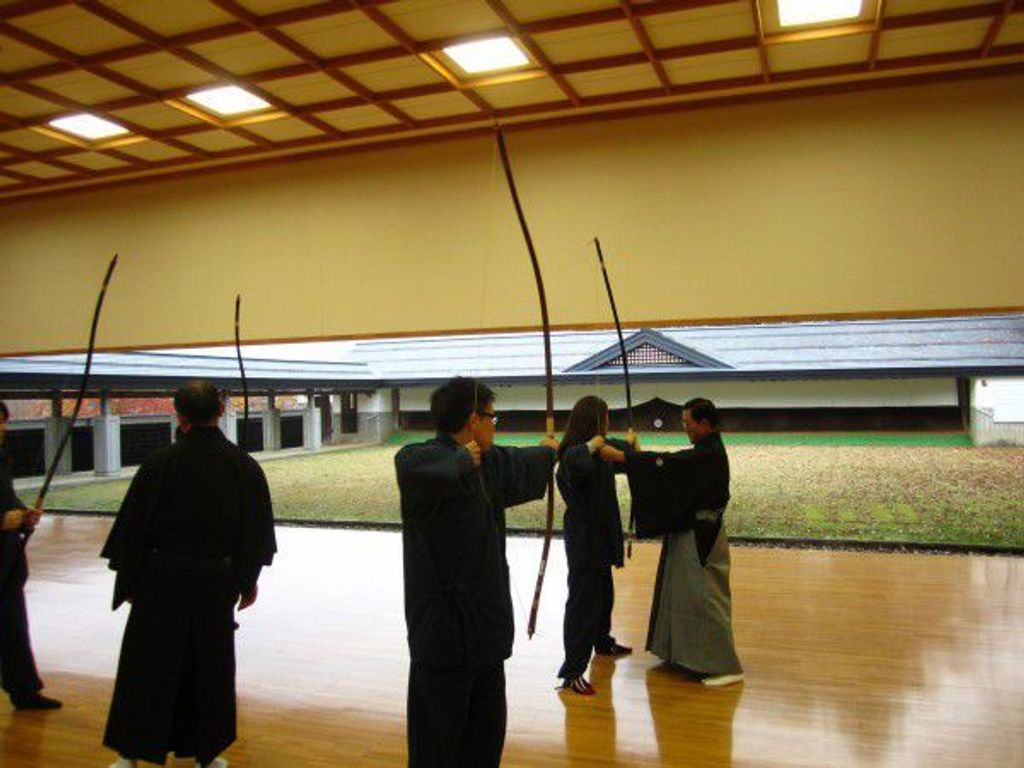 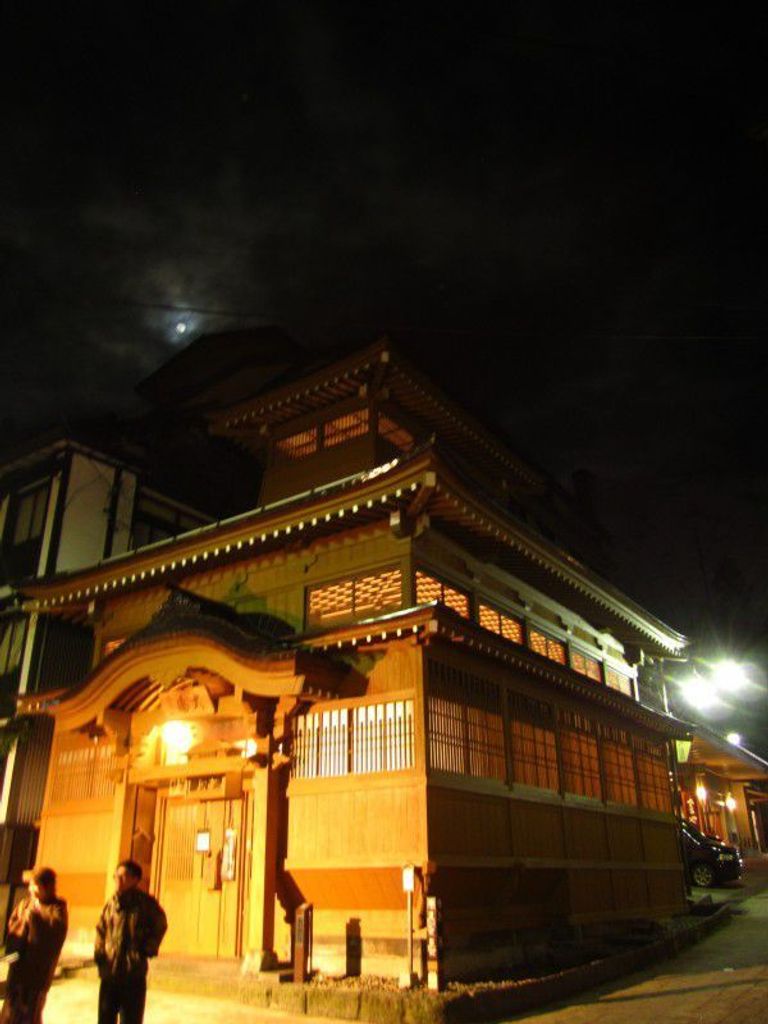 One of the 'Soto yu's

That night we stayed at a small pension in Nozawa Onsen, a small town in Nagano famous for the hot water springs and marvelous ski grounds. Although the ski grounds were not in use yet, the hot springs were very much so and the streets were bustling with people in yukata (Japanese robes) on their way from or to onsens. In Nozawa, there are hot springs called 'sotoyu', meaning 'outside hot spring'. They are scattered over town, and although they are not just small, natural pools of water you can enter from the side in total open air, like I imagined, they are in fact really small and are only equipped with a roof over them and a partition to separate women and men. There are also some pools in town like I had imagined, but the water from the ground is so hot that they use it to boil vegetables and eggs in it. It's a soup-onsen! If you're not a vegetable person, you can also opt to bathe with wild monkeys. There are various tours organised around town for visiting these open-air wildlife onsen. Be careful though, in the monkeys' onsen there are also things floating around in the hot water, but mind you that they're not vegetables...

After having a wonderful breakfast at our hotel (Haus St. Anton, an Austrian style pension ran by a really nice Japanese couple), we took to the mountains again for our last yoga lesson. This time it was not so freezing which made for a much nicer lesson. On top of a mountain above a rather dead ski-resort town called Madarao, we spread out our mats and became one with Nagano nature. For people who are stressed out or otherwise overworked I can definitely recommend. 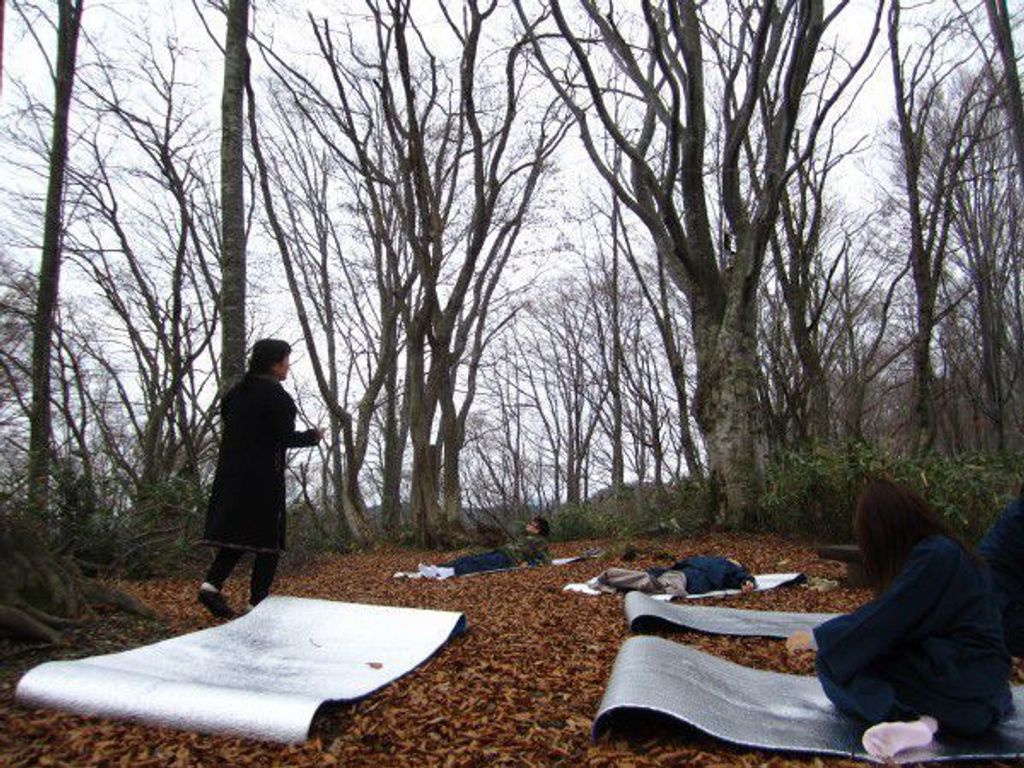 This was our last part of the trip, and after a lunch at a wine farm (St. Cousair) we were taken to Nagano station and caught the train back to Tokyo.