Looking to spend some time on your trip to Japan relaxing amongst great nature and beautiful ponds. Why not visit some Special Places of Scenic Beauty, or a Special Historic Site? You don't even need to leave Tokyo, as these five amazing gardens can all be found within the capital. These five gardens can be enjoyed throughout the year, and offer a different experience every time the seasons change: 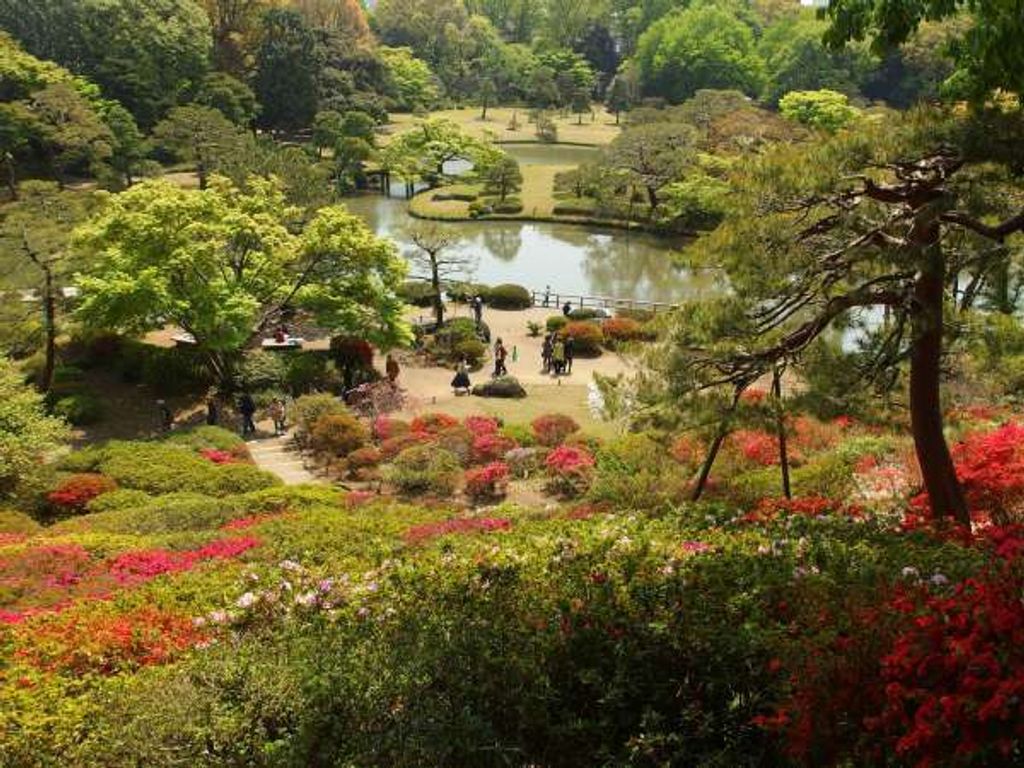 In the pursuit of a world of beauty, it is said that one daimyo garden sets the standard for comparison. Among other things, Rikugien is an example of a strolling, mountain and pond-style landscape garden , a garden for enjoying changes in scenery from not just one location, but also while walking along the garden paths.   From all vantage points, the garden has been meticulously planned so that visitors can see a beautiful landscape. One feature of the garden is that, by placing waka, a poetic form unique to Japan, around the garden , poetry was built into the landscape itself. The gardens were built under the direction of Yanagisawa Yoshiyasu, a daimyo with deep literary knowledge, using Yanagisawa’s own design. Waka poems from the Manyoushu and Kokin Wakashu poetry collections were reproduced at 88 scenic location where the poems were once recited. As “The 88 Boundaries of Rikugien,” stone pillars were erected in each of the 88 scenic spots, of which 33 spots remain today.   In the seven years it took to complete the garden, a pond was dug from a flat plot of land, mountains were built, and a river was made.

All that effort can be appreciated even as we enjoy the scenery of each season: cherry blossoms in spring; azaleas in early summer; hydrangeas in the rainy season; changing leaves in autumn; plum blossoms and camellias in early spring. Rikugien is especially well-known for its azaleas. During the gardening boom of the Edo period, a large number of azaleas were planted, and this remains the case today.   Even at nearby Komagome station, the azaleas bloom beautifully. During the Golden Week holidays in May, events such as the Azalea Festival are held, making Komagome famous as “The Town of Blossoming Azalea Flowers”   It is said that people in the old days would take a little rest after a walk, and that it took a whole day to go around the gardens. With so many changes of scenery, visitors could imagine themselves to be taking trip around the whole country. After a stroll, why not take a break at Fukiage Tea House?   Visitors can have a green tea and Japanese sweets set (510 yen), iced tea in the summer, amazake, a kind of warm, sweet Japanese sake,  in winter (300 yen) and other refreshments. Alongside Mt. Fuji and The Golden Pavilion in Kyoto , Rikugien has been designated one of Japan’s Special Places of Scenic Beauty. To take in the scenery during a leisurely stroll in the garden--there’s no greater luxury than that. 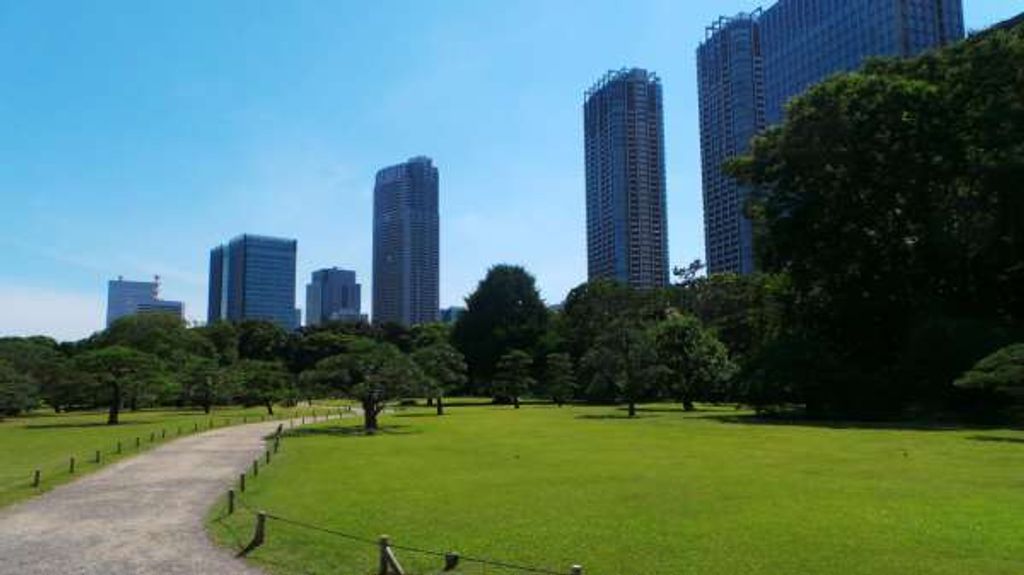 During the Edo period (1603 – 1868), feudal lords across Japan had second houses in the capital Edo (present day Tokyo) because they were obliged to be in Edo for certain periods to engage in public services (the sankin-kotai system). They built beautiful gardens for these second houses where they entertained guests. For this reason, much passion was put into these gardens by feudal lords who competed with each other to prove that their clan was the best by creating the best garden; many clever ideas and arrangements were incorporated into the gardens. A garden craze ignited by these feudal lords caught on in the town of Edo. Hamarikyu is a garden that was built during this garden craze of Edo. The construction of Hamarikyu began in 1654 when Tsunashige Tokugawa, the young brother of the fourth shogun (military governor), started the construction of his estate. A number of construction projects for the garden and the buildings were conducted by successive shoguns and finally, the garden was completed during the times of the eleventh shogun, Ienari Tokugawa.

The garden is an “excursion type” garden in which visitors can enjoy a variety of changing views while strolling around the garden. Nevertheless, the garden stands out the most for its boldly created huge pond which was constructed by filling up and drawing seawater from the Tokyo Bay. This design was devised with the intention to create views that change by the states of the tide; in addition to enjoying these views, it is said that the residents and their guests had fun fishing saltwater fish which, riding the tide, entered the pond from the sea. The highlights of the garden are this vast seawater pond “Shioiri-no-ike” and the magnificent design of the garden with artificial rolling hills that were created to resemble a natural landscape. 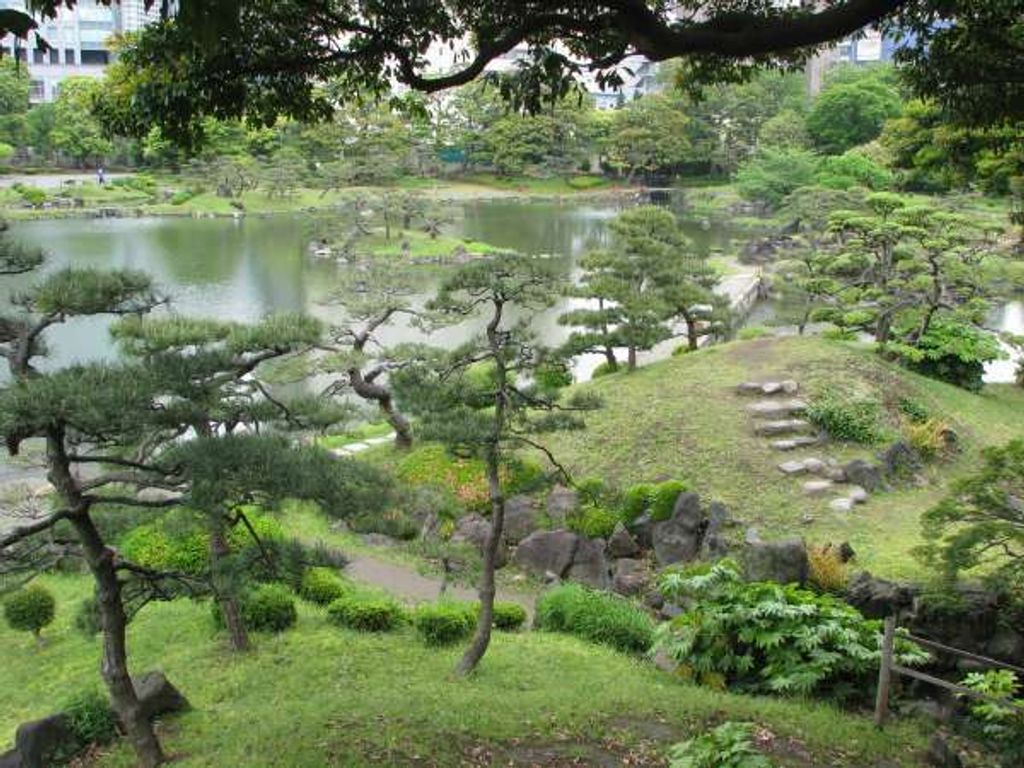 In the early part of the Edo Era in the year 1678, shogunate elder statesman Tadamoto Okubo set up a residence in the capital, and in 1686, a garden was built on the site which was the origin for Kyu Shiba Rikyu. The garden, originally called Rakuju-en, was a circuit-style garden centered around a pond and could be enjoyed for the changing vistas during a walk there. At the time, the garden was near the ocean, so the pond was created with seawater that was placed onto the reclaimed land. The garden incorporated a Chinese-style design that was considered iconic by the people of Edo and was praised for its exoticism; that design can be viewed even now. In modern times, the landscape has completely changed due to further reclamation from the sea and with the construction of tall buildings, but the vista of this Edo garden within the city has continued to be maintained and preserved which has led it to be recognized as a Place of Scenic Beauty for its splendid appearance under the Law for the Protection of Cultural Properties.

The highlights of Kyu Shiba Rikyu are the garden objets d’art with their own distinct characteristics. The pond was inspired by Lake Seiko in China, and there is the Chinese-style Seiko-no-Tsutsumi along with the Japanesque stone lantern. The garden also incorporates stones of various sizes and shapes to create an arrangement that roughly represents natural features such as a waterfall and mountains. The floating islands in the pond are inhabited by wild birds which bring a peaceful atmosphere. As for the flora, beautiful Japanese black pine has been planted everywhere to provide greenery throughout the year while seasonal flowers add color and change. There are cherries and wisteria in the spring, lotus and iris in the pond during the summer, the changing leaves in the autumn and peonies in the winter whose seasonal scenery can be enjoyed. Currently, the pond doesn’t use seawater but is filled with freshwater so that koi can swim in it. Unlike in the Edo Era, you can now enjoy the scenery of the waterside. 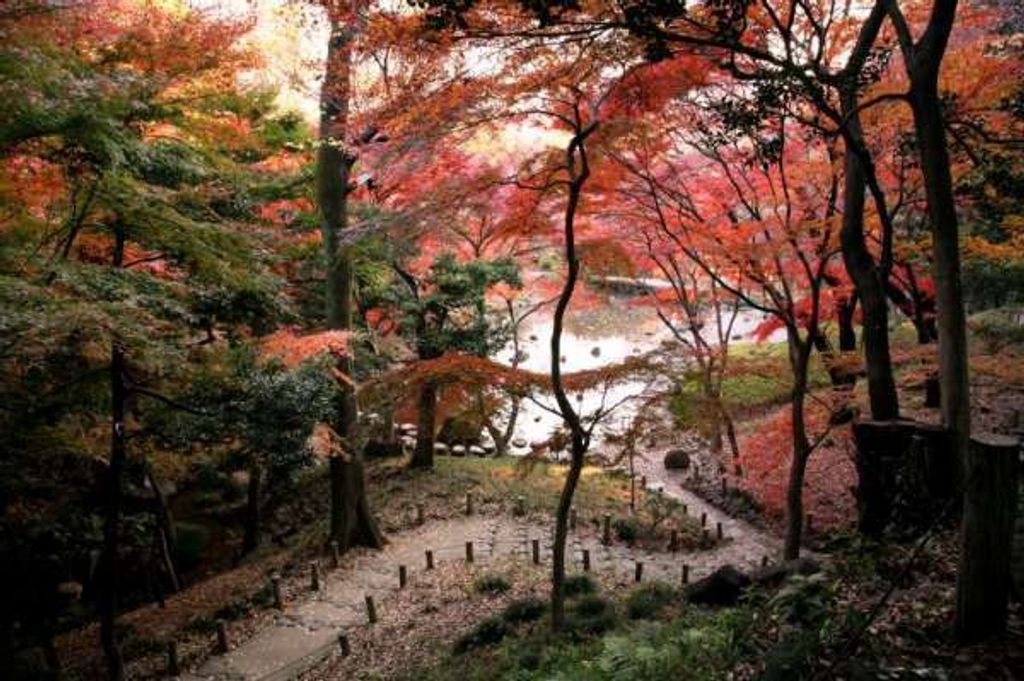 Koishikawa Korakuen was built in the Edo Era. It was built in 1629 in the early Edo Era as the Edo residence garden for the Mito Tokugawas, one of the three branch families retaining status just under the Tokugawa shoguns. Afterwards, under the aegis of the second leader of the Mito Tokugawas, Mitsukuni, further work was done and the gorgeous garden was completed. Koishikawa Korakuen was designated in 1952 as a Special Historic Site and Special Place of Scenic Beauty, and it has continued to retain its beautiful appearance as a famous garden which is prominent in Japan.

The garden was designed with a beautiful view of a pond centering various bridges and stones, and was constructed to resemble the mountains and rivers in the natural world with small hills and streams to enjoy as a part of nature as you sit in the garden. Also, it was created in the style of a garden encircling a pond which was popular during the Edo Era to be cherished as a landscape whose impressions change as you walk through it. At the time, Mitsukuni, who was influenced by Confucian thought, imbued the garden everywhere with a Chinese style that included the arched bridges, a style that was considered to be the cutting edge in garden design.

The biggest highlight in the garden has to be Daisensui Pond that expressed the scenery of Lake Biwa, Japan’s largest lake. Long ago, it is said that the daimyo (feudal lords) took graceful boat rides on the pond. As well, the fusion of nature-filled vistas such as Seiko-no-Tsutsumi, which resembles Seiko Lake in China, Engetsukyo Bridge, which was designed by a Confucian scholar during the Ming Dynasty, and the vermilion Tsutenkyo Bridge is splendid. You can enjoy the flowers and trees of the four seasons whenever you visit, but during early April, the 60-year-old weeping cherry trees start to blossom in the garden, and the scenery becomes even more vivid. On the other hand, a rather odd thing is the presence of Tokyo’s only rice paddy which was built to teach about the hardships in growing rice. However in summer, the idyllic scene of ears of rice rustling away is quite calming. 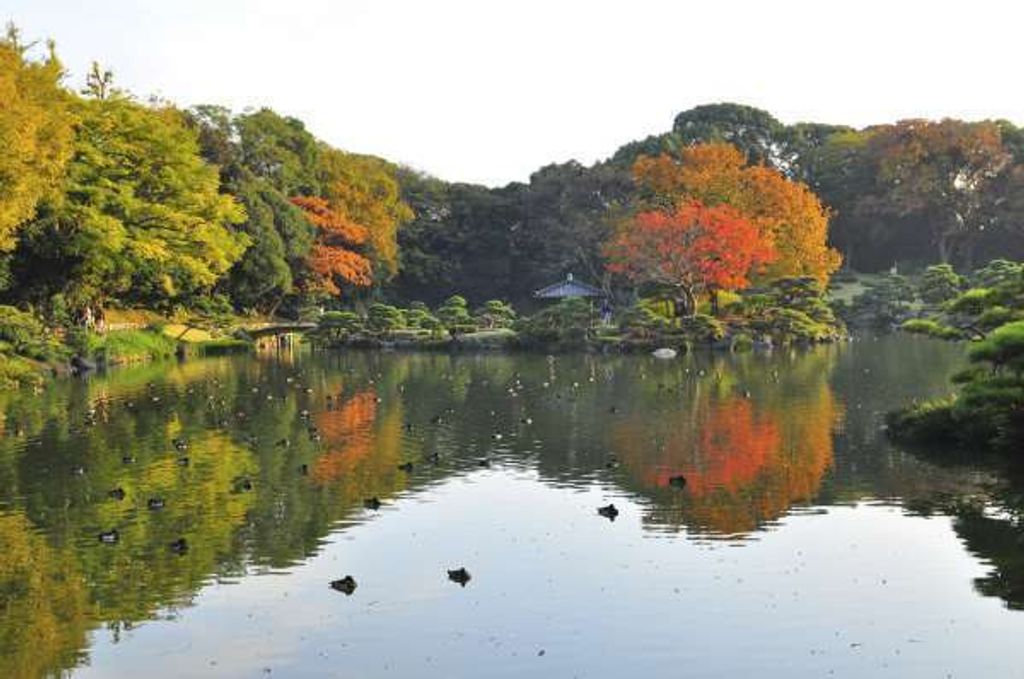 The basic form of Kiyosumi Garden was built when residences for an Edo Era business magnate and a feudal lord were established on this site. In 1878 when Japan was undergoing modernization, the founder of Mitsubishi, Yataro Iwasaki, acquired the prominent big business enterprises in Japan, and had a garden built for the benefit of his staff and guests. Then after his passing, his dying wish was fulfilled by his younger brother, Yanosuke, and the beautiful garden surrounding a pond was completed according to traditional Edo style. On the west side of the garden, a Western-style building, designed by Josiah Conder, was built. Kiyosumi had been a distinctive and lovely garden completed with a mix of Edo tradition and Western architecture on the same grounds, but it was heavily damaged in the 1923 Great Kanto Earthquake and the Conder-designed building was burned down. However, the garden saved many lives as a place of refuge for nearby residents, and so Yanosuke’s son, Hisaya Iwasaki, donated the eastern half of the garden to the city of Tokyo, after which in 1973, the western half was purchased by the Tokyo government, and the garden was opened to the public.

The special feature of Kiyosumi Garden is its construction focusing on the style of the Edo Era while Japan was modernizing during the Meiji Era. With a pond, man-made hills and a dry landscape garden as the core, the garden is centered on the pond which can be enjoyed for its shifting scenery as you walk by. There are plenty of features catering to visitors such as a large pond with a group of central islands, an arbor built in the sukiya style, Tsutsuji-san which resembles a mountain, and step-stone bridges known as iso-watari on the shores of the pond which were thought up of by Yataro Iwasaki himself. Koi carp and turtles inhabit the pond, many species of wild birds can be observed, and the scenery of flowers changing over the four seasons is very soothing. Iwasaki once remarked, “If you feel anguished, look at a famous garden”, and Kiyosumi is the garden of his dreams brought to life. Spend a calming time at Kiyosumi Garden.