Four Stations for Shopping and Dining

The major train stations in Japan have everything. From bars, shops, and restaurants, to hotels, theatres, and museums. The four train stations selected below cover a wide range of services, and each one boasts original architecture and fascinating design features: 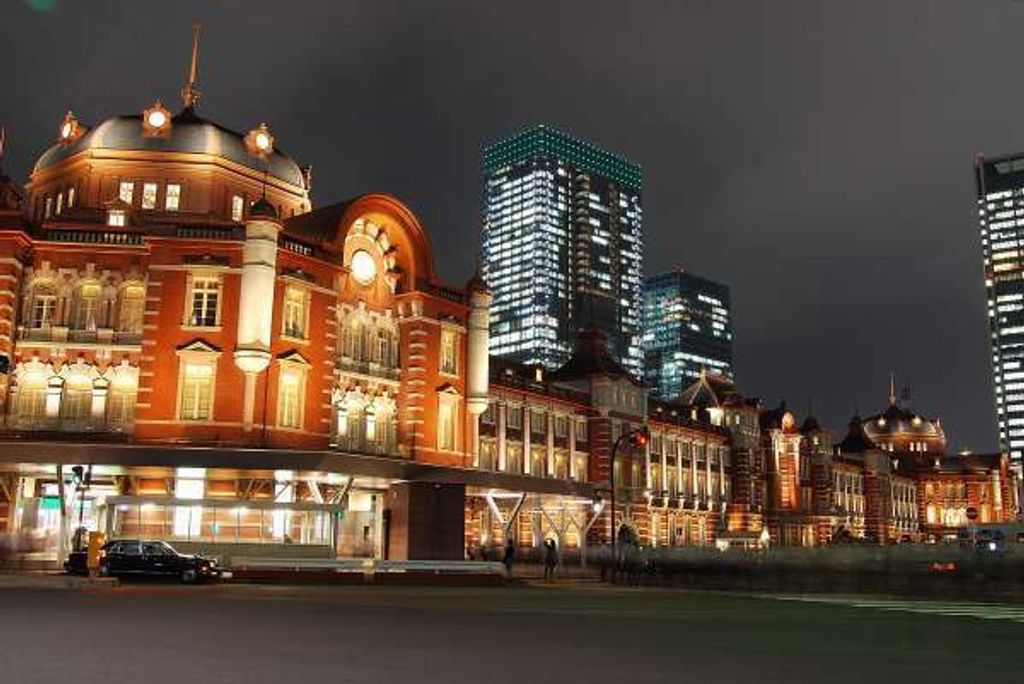 Tokyo Station is a terminal whose history represents Japan. Not just for the tourists who are using it as the starting point for their travels, the station is also always bustling with people who are heading back to their hometowns and commuters going back to the suburbs. In particular, since the area around Tokyo Station is filled with office buildings, businessmen in their smart suits are all around on a regular basis. The station, which has had a century’s worth of history since its opening in 1914, has a proper beauty as a terminal representing the country. Suffering war damage on its dome and upper parts, 60 years passed using a design that came from an urgent restoration that differed from the current situation, but when the Marunouchi area surrounding Tokyo Station underwent reconstruction, the citizens’ demands increased for a restoration of the station to its original appearance. That restoration was completed in 2012.

The classical Western-style architecture with red brick has been designated as a National Important Cultural Property. Not just the beauty of the exterior but also the arched ceiling at the Marunouchi North ticket gate is a highlight. There are 30 platforms in the station which makes the station No. 1 in Japan in terms of scale. Also, the Ekinaka commercial facility inside the station has a complete lineup of food stores, souvenir shops, restaurants, general goods stores, bookstores and other establishments. Among them, the station box lunch (ekiben) shop Matsuri is quite interesting.

Selling ekiben that incorporates local specialties from every region in the country, it’s a Japanese custom to travel on the train while noshing on the lunch, and at this station, there are over 170 kinds of popular ekiben from all over Japan. It’s great to buy the lunch that you like and then get on the Bullet Train. Having a view outside the window while eating is an exceptional experience. Try walking around Tokyo Station. Since the surrounding area is a business district, there are many office workers seen regularly. But in recent years, the number of commercial buildings has also grown where you can enjoy shopping and meals. At the restaurants on the 35th and 36th floors of the landmark Maru Biru, you can enjoy some sophisticated dining while looking down on the nightscape of the beautiful Tokyo Station. Besides Japanese cuisine, there are plenty of other styles such as French, Italian, Chinese and Asian. And the streets are also wonderfully decorated with lights during the Christmas season. Tokyo Station is still evolving and it’s not just a starting point for a trip. Sightsee, walk, taste, enjoy and then take that trip. There is more than one way to enjoy the area. 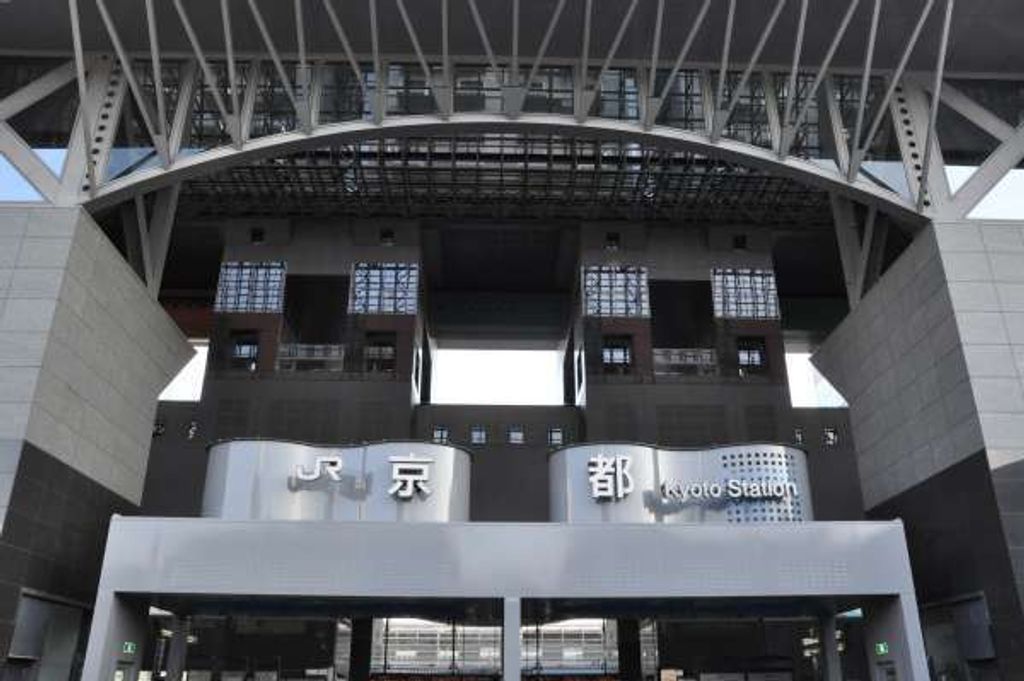 Kyoto Station is one of the leading terminals in Japan which has the 4 transportation companies of JR Tokai, JR West, Kintetsu and the Kyoto Municipal Subway running through it. Many city buses also come and go from the station, connecting with the main tourist spots in downtown Kyoto. Before you go on your tour, first head for Kyo-Navi, the tourist information center which is located on the 2nd floor of the Kyoto Station Building along the Nanboku Pedestrian Walkway. Tourist information on all areas within Metropolitan Kyoto is available in many languages.

To start and finish your tour of Kyoto, there is Kyoto Station Building right above the station itself. Starting with a department store and a hotel, there are many other establishments like restaurants, a theater, an art museum, and electronics shops. There is also the shopping mall to make the tourists happy, The Cube. From the cuisine of popular and well-established restaurants to traditional products gleaming with the techniques of craftsmen, almost all of Kyoto’s souvenirs are amassed here. You want to dine on something light, but you want something Japanese? In that case, try the Kyoto Ramen Koji on the 10th floor. Naturally, there is Kyoto ramen but there are popular ramen shops from all over Japan such as from Hokkaido in the north and Hakata from the south.

There is the popular Kyoto Station Building with its shopping and cuisine, but there is another place that is relatively unknown. It is the Sky Way which is on the top of a stairwell 14 meters above ground. From the glass-enclosed straight pathway, Kyoto Tower is right in front of your eyes. There are 4 observation areas, and you can enjoy the northern landscape from the station. And you can get a close look at the reinforcing bars used in the construction of the building and admire the beauty of the architecture. To get to the Sky Way, take the escalator by the Great Staircase inside the station. You will want to make a visit while waiting for the train. 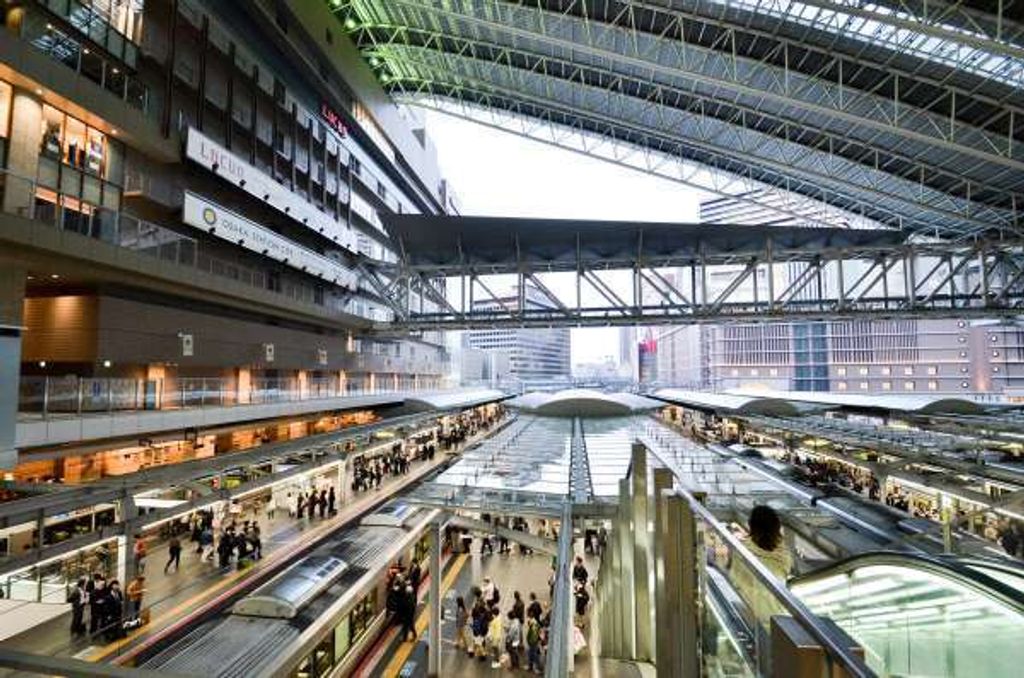 A former freight depot zone with an overall area of 24 hectares at the northern end of JR Osaka Station has been redeveloped into an area merging the station and the city. JR Osaka Station is next to a shopping mall, movie theaters, sports gym, hotel, restaurants, hospital and other facilities. A shopping mall, Lucua, has opened which aims at the young, and there is the Daimaru Department Store which includes the Pokemon Center and Tokyu Hands, Eki Marche with candy shops and delicatessens, along with Lucua West and a second branch of Tsutaya Books, specializing in lifestyle, to be opened following the first branch in Daikanyama, Tokyo. And to the north of Osaka Station City, the lively shopping mall aiming for people in their 30s and 40s, Grand Front, has also opened. The latest trends have been condensed into one area for the enjoyment of efficient shopping, and the many restaurants and cafes are another strong point. There are many coin lockers and luggage checks around the station so shopping is convenient.

Under a huge dome conceals an entire station where 1500 trains come and go in one day. Directly below the dome is the Time and Space Plaza which holds many events and has a bridge connecting the north and south ends of the station. The trains running below create a moving diorama that makes it a good observation spot. The gold clock is also a convenient spot for meeting people. Audio guide rentals in English, Chinese and Korean are available so you can find out about the 8 station plazas and the history of Osaka Station. 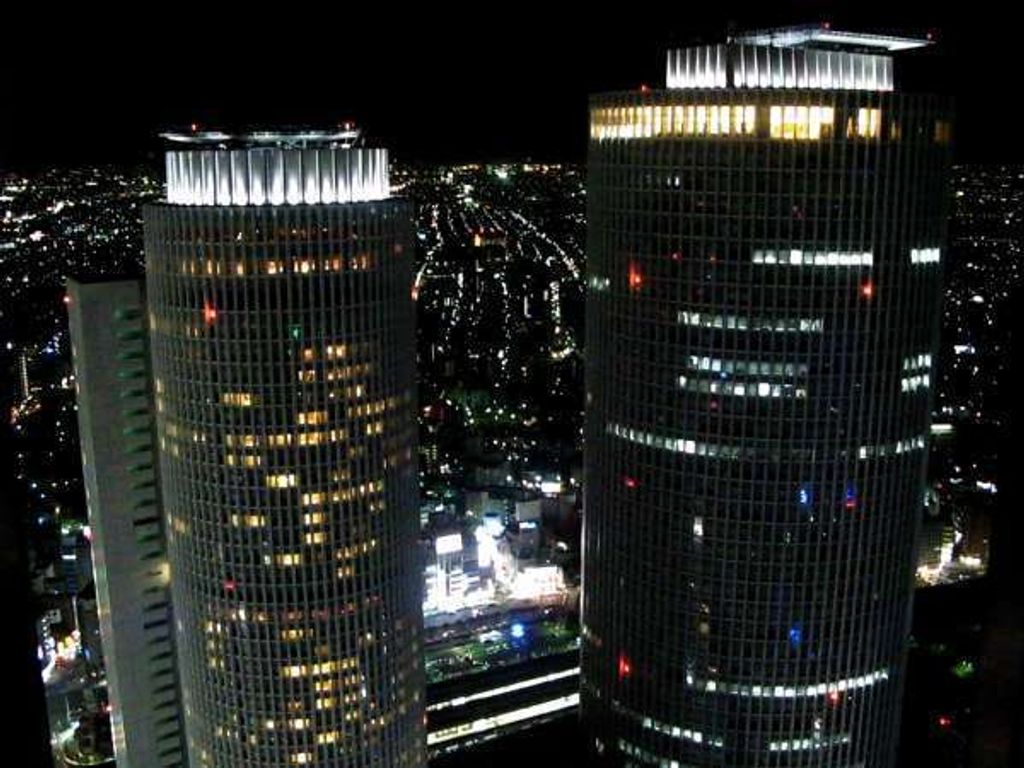 The JR Central Towers that were built alongside Nagoya Station are station buildings that consist of two towers of 53 and 51 floors and a lower structure that has 18 floors. At a height of 245.1 meters, it is so tall that it can be seen from neighboring prefectures. Because of its height and the two cylindrical towers, the complex has become symbolic of Nagoya. Until it was superseded in 2014 by the ultra-high skyscraper, Abeno Harukas, in Osaka, it had been recognized by the Guinness Book of World Records as being the tallest station buildings in the world. The lower section of JR Central Towers contains the concourse for Nagoya Station and Takashimaya Department Store, while one tower has the Nagoya Marriott Associa Hotel and the other tower is an office building. There are also facilities such as a restaurant area, a fitness club and an observation lounge. It can be considered a station building that pioneered the ultra-high building concept where you can enjoy shopping and dining on the underground levels and enjoy the vista of Nagoya. Also, since JR Central Towers is the station building for Nagoya Station, it is advantageous for its access. Naturally, there is JR Nagoya Station where private trains, subways and buses arrive and depart, and the area is easily accessible to major tourist sites in Nagoya and to Tokyo, Osaka and Kyoto by Bullet Train.

The lower section of JR Central Towers is the department store Takashimaya which goes from the 2nd basement all the way up to the 11th floor. Starting with the basement food market, Takashimaya sells fashion for ladies, men and children, and has a bookshop and CD store. You can enjoy some leisurely shopping with cafes located on each floor. Restaurants are located on the 11th and 12th floors. Furthermore, in the 51-floor office building, there is the Panorama Salon managed by Takashimaya where you can enjoy the view while dining.