If you are looking to experience one of the great festivals of Kyoto, then check out our handy guide. They include Gion Festival, not only the best festival in Kyoto, but also one of the three great festivals of Japan; so huge, that it runs for an entire month. There are two one day festivals that can also be enjoyed on a trip to Kyoto. So, read on for details of all three: 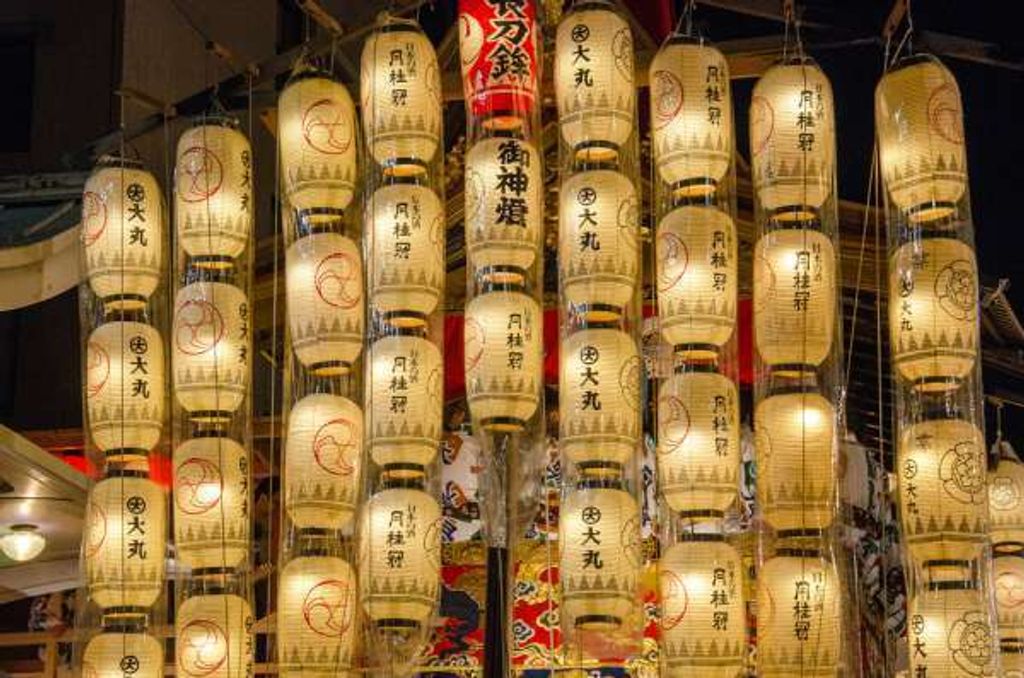 The Gion Festival, one of Japan’s three great festivals, is a religious celebration that has continued at Yasaka Shrine for 1100 years, and for 1 month from July 1st to July 31st every year, it’s held at the shrine and in the central area of Kyoto. Starting with the Yamaboko Junko parade and the Shinko Festival, various events unfold. At the Shinsen-en Temple where a giant garden of the ancient capital existed, 66 halberds representing the 66 territories within Japan at the time stand in worship of the Gion gods, and the prayers for the prevention of disasters began from here. The yamaboko floats are decorated with ornaments from all places and times so that they have also been called moving museums, and since they fulfill the role of cleansing the city of evil spirits during the parade, they are promptly dismantled once the parade ends.

The parade is separated into the saki-matsuri (former parade) and ato-matsuri (latter parade), and the 3 days prior to each parade are called the yoiyama. The yoiyama events for the saki-matsuri are held on July 14th-16th, with paper lanterns on the yamaboko floats being lit up and goods such as charms and folding fans being sold. In addition, boarding passes are sold so that you can ride on the floats during the yoiyama only. On the 15th and the 16th, the streets are closed off to automobile traffic, so many people enjoy the street stalls that are set up. On the day of the saki-matsuri, the 17th, 23 yamaboko floats depart at 9 a.m. from the Shijo-Kawaramachi area, and the Shimenawa-kiri event at Shijo-Fuyacho and the Tsuji-mawashi event where the floats are turned at every intersection are the biggest highlights. From 4 p.m. on the same day, the Shinko Festival is held and 3 portable shrines (mikoshi) from Yasaka Shrine are paraded through Kyoto until about 8 p.m. Events for the ato-matsuri are held on July 21st-23rd, and although street stalls are not present, at the ato-matsuri on the 24th, 10 floats start from Karasuma-Oike and go on a course that is the reverse for that of the saki-matsuri. The spectacle of these giant yamaboko floats, reaching up to a maximum of 12t, parading through the streets of Kyoto is amazing. The saki-matsuri which is the livelier of the two parades is a great event that cannot be missed. 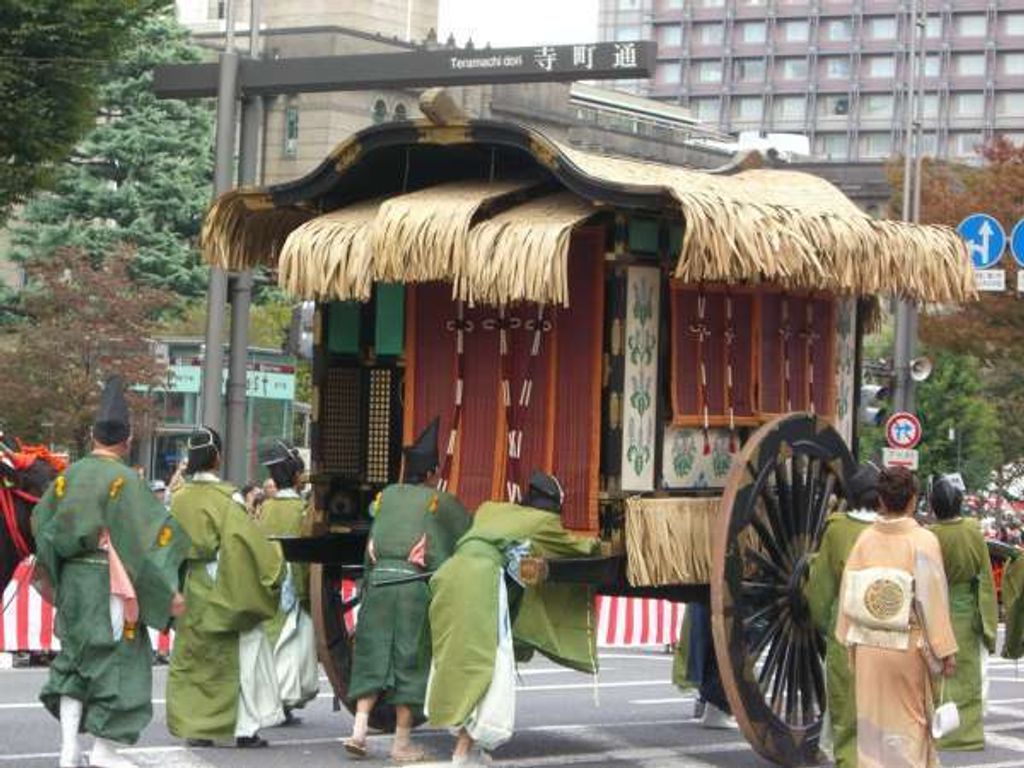 The Festival of Ages is one of Kyoto’s three great festivals which include the Aoi Festival and the Gion Festival, and began in 1895 to revitalize Kyoto whose spirit had been lost following the turmoil of the late Tokugawa Era and the transfer of the capital to Tokyo, and to commemorate the 1100th anniversary of the founding of the Heian-kyo (the former name of Kyoto). It’s held every year on October 22nd, the day that the capital was moved to Heian-kyo in 794 and therefore the birthday of Kyoto. Citizens’ groups from all over Kyoto run the event with 20 sections representing the 8 eras of the Meiji Restoration, Edo, Azuchi-Momoyama, Muromachi, Yoshino, Kamakura, Fujiwara and Enryaku which include cows and horses and 2000 participants. With the sounds of taiko drums and flutes by the Yamaguni-tai squad in the lead, the procession takes approximately 3 hours to pass. Furthermore, at the end of the parade, the divine spirits of Emperor Kammu and Emperor Komei, enshrined deities at Heian-jingu Shrine, ride the Horen mikoshi through the streets of Kyoto to view the lives of the citizens, with the purpose of the festival being for the citizens to pray as one toward the destination of Heian.

In the procession, historical figures such as Ryoma Sakamoto, Nobunaga Oda, Hideyoshi Toyotomi, Lady Murasaki and Sei Shonagon parade, while groups of common folk clad in clothing representing each era vividly revive the lifestyles of those times, truly resembling a moving picture scroll of the ages. With 12,000 examples of clothing and furnishings along with all of the materials, dyes, designs and detailed background research behind the hairstyles and makeup, the traditional techniques of the old capital are re-enacted faithfully. The procession departs from Kyoto Imperial Gardens at 12 noon and arrives at Heian-jingu Shrine at around 2:30 p.m. You can sightsee for free at the departure point of Kyoto Imperial Gardens and can take photographs without including the modern architecture, so the area is recommended for taking photos that resemble a Heian picture scroll. 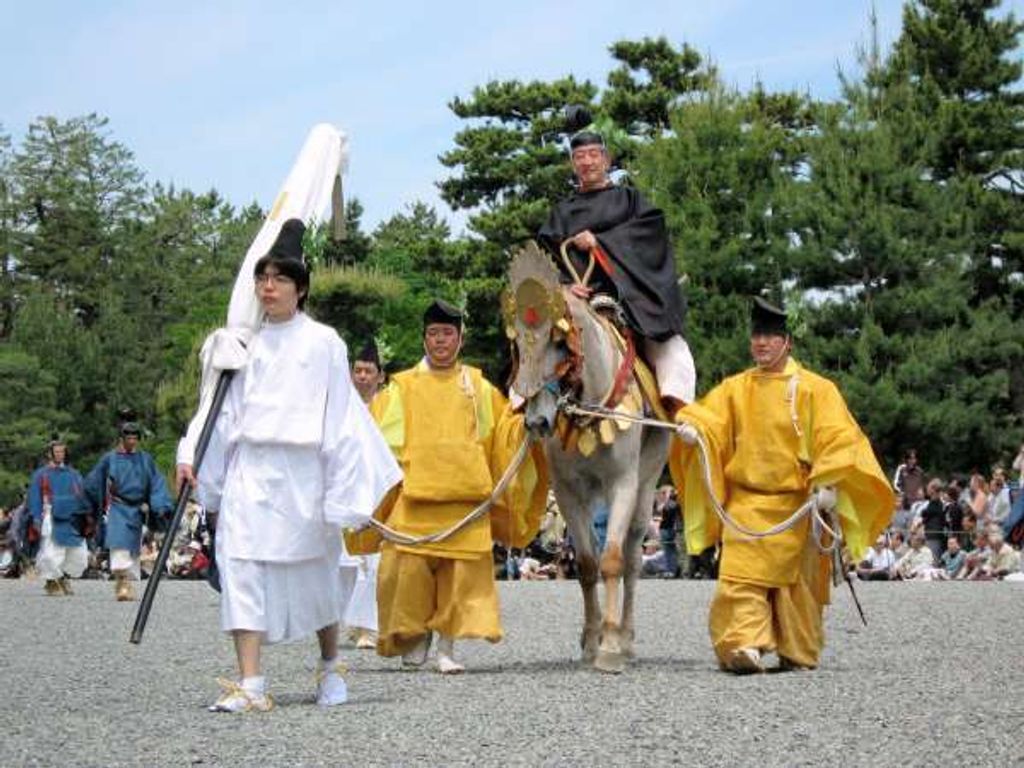 Alongside the Gion Festival and the Festival of the Ages, the Aoi Festival is one of the three main festivals in Kyoto. As Kyoto’s oldest festival, an elegant procession consisting of people appearing as the over-500-strong Heian nobility leave the Kyoto Imperial Palace, pass Shimogamo Temple and head for Kamigamo Shrine over a distance of about 8km. The festival originated approximately 1400 years ago with a religious festival held to pray for a great harvest, and is currently held annually on May 15th. Over the past 1400 years, it has been held as a national event, and it is a valuable festival which retains many dynastic customs. It is known as the Hollyhock Festival since leaves of the plant are strewn all over the clothes, the carriages and even the horses. At Shimogamo and Kamigamo Shrines, the Imperial Messenger reads out a ritual prayer and gives offerings to the gods.

The highlight of the festival is the Roto-no-Gi procession in which a keiibishi (an officer representing the Imperial police and court administration during the Heian Era), the kurazukai (a courtier bearing the message to the gods), the carriage transporting the highest official in the center of the parade in the form of the Imperial Messenger, the Saio-Dai wearing 12 gorgeous layers of traditional robes weighing as much as 30 kg, and other members of the Heian nobility create an elegant dynastic parade with a total of 500 people and horses. The Shato-no-Gi ceremony is performed when the procession arrives at both shrines and involves the Imperial Messenger reading out the ritual prayer. And once offerings are given, sacred horses are led about and a musical offering to the gods known as the Azuma Asobi is performed by dancers. The Saio-Dai was once an unmarried daughter of the Emperor, but currently she is selected from a group of female residents of Kyoto recommended by the three main families of the tea ceremony. Locally, the annual choice for Saio-Dai becomes a lively topic of discussion. Free seating at the departure point of the Kyoto Imperial Palace or Shimogamo and Kamigamo Shrines has also been established.