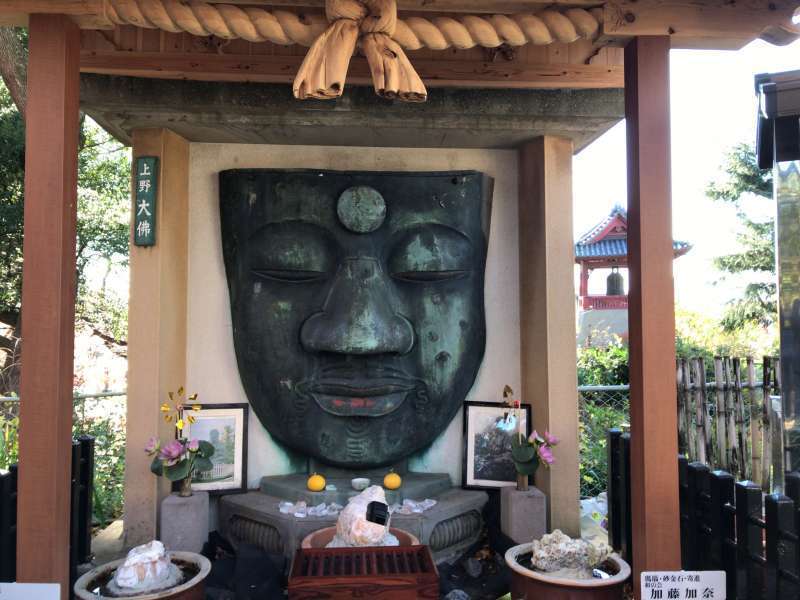 The face of a great statue of Buddha in Ueno Park 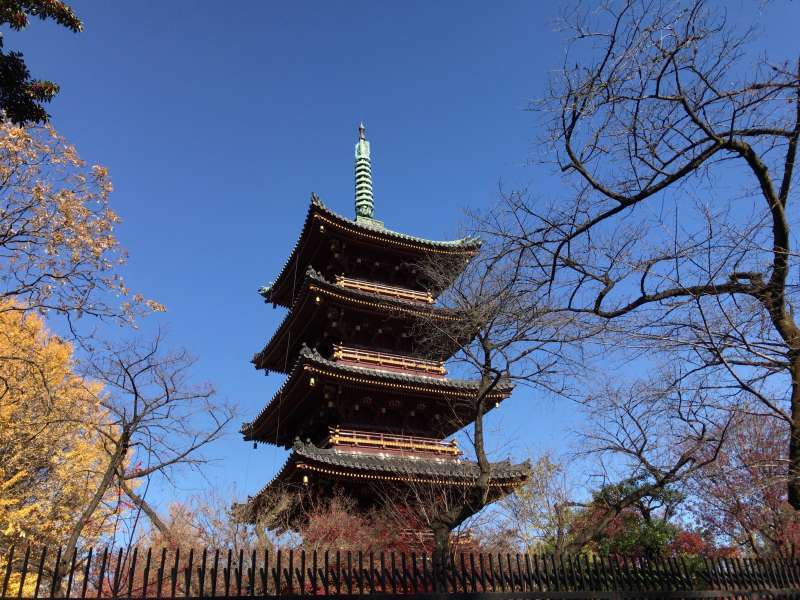 The five-story pagoda in Ueno Park, built in the 17th century

The HONKAN building, or the main building of Tokyo National Museum, built in 1937 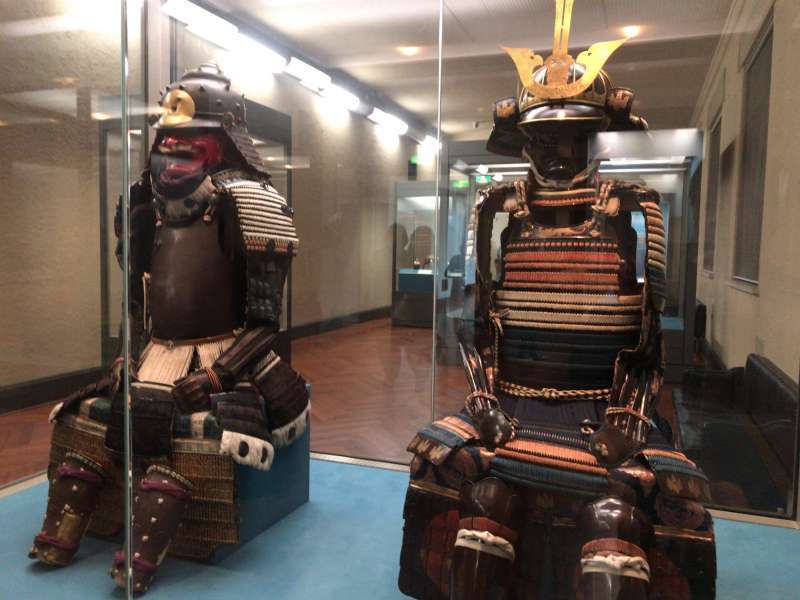 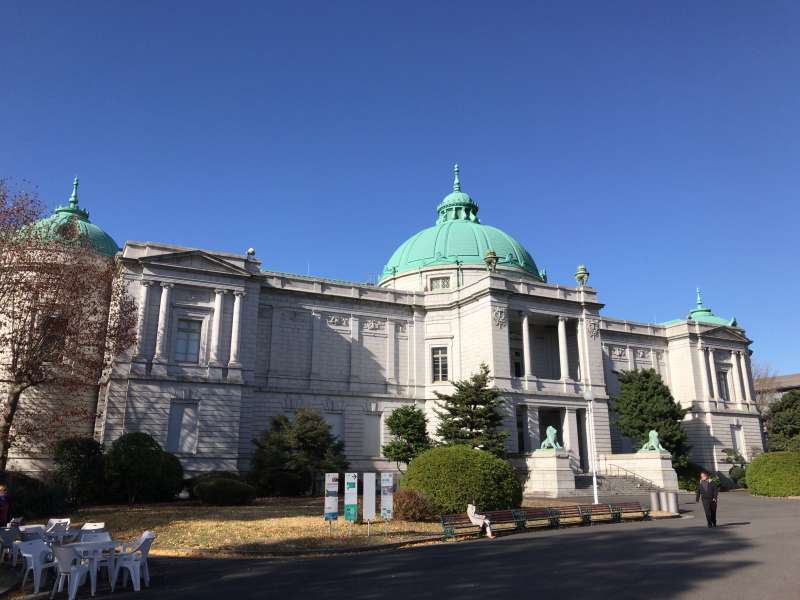 Hyokeikan, an exhibition hall in Tokyo National Museum, built in 1908 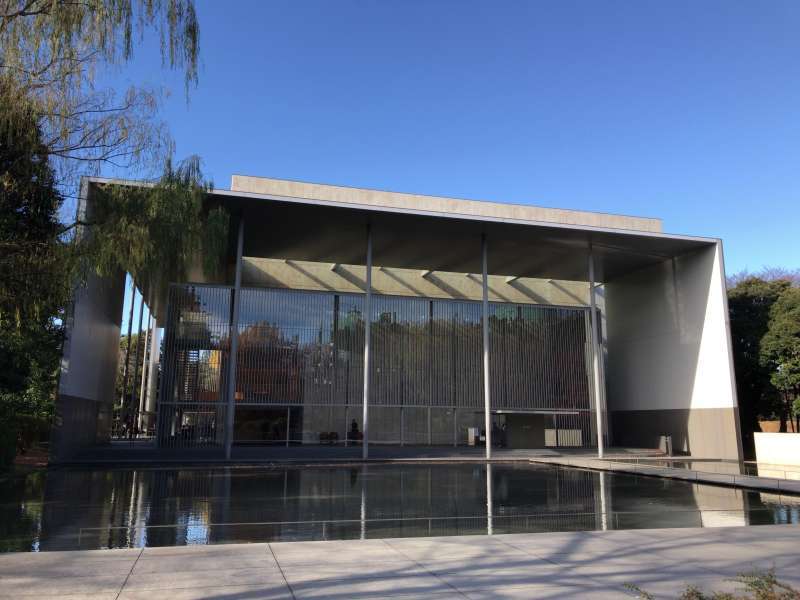 The Gallery of Horyuji Treasures designed by an eminent architect Yoshio Taniguchi, built in 1999 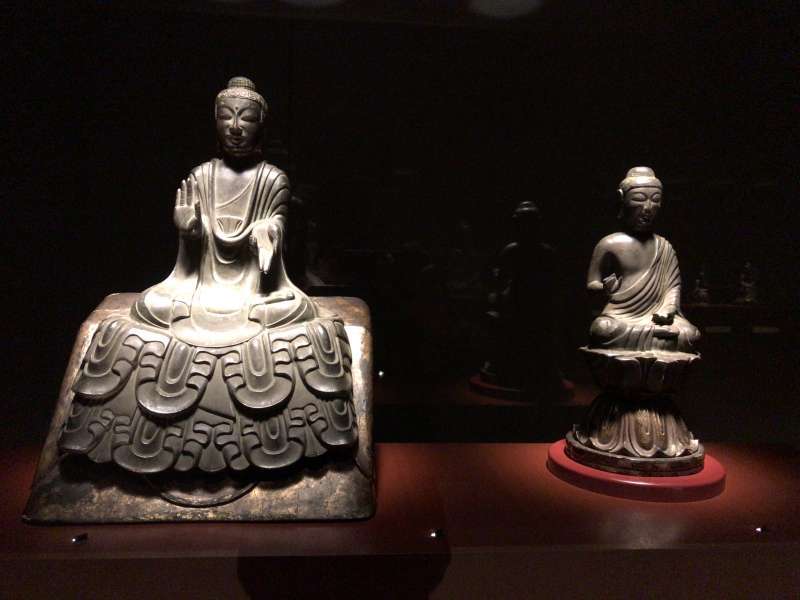 Buddhist statues exhibited at the Gallery of Horyuji Treasures 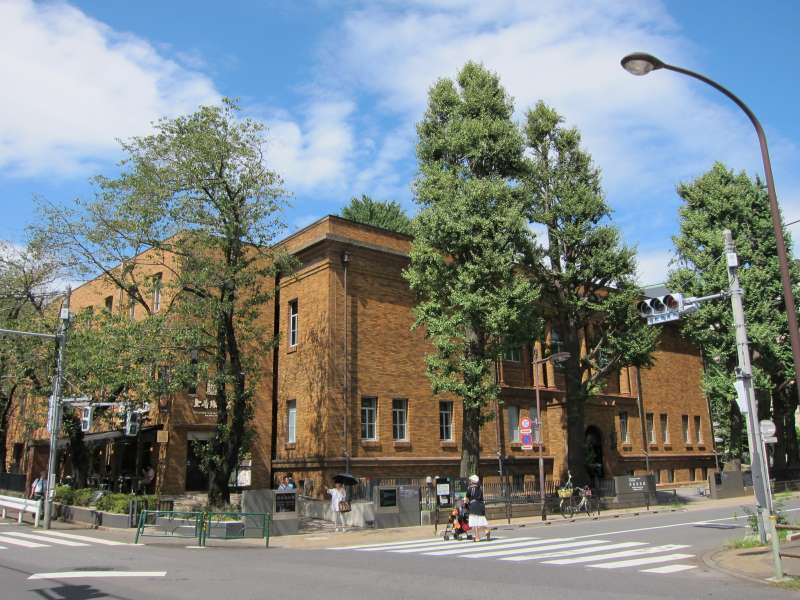 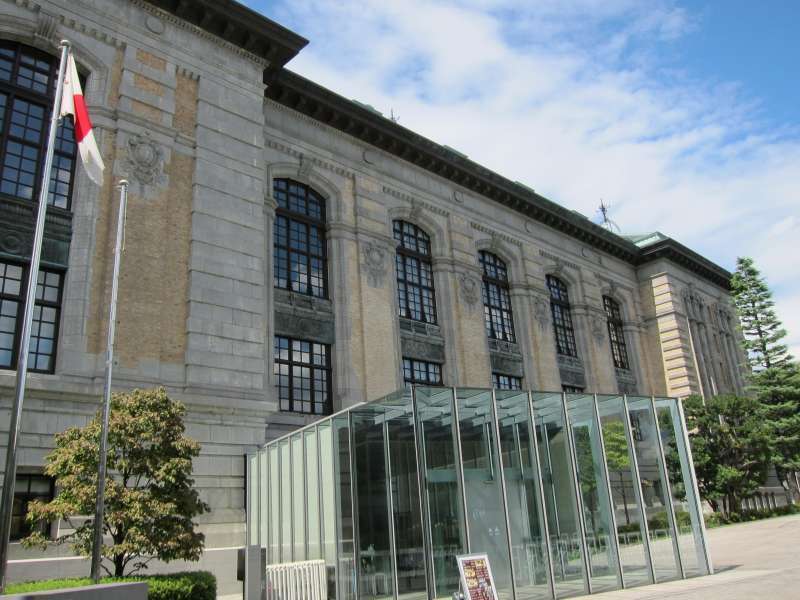 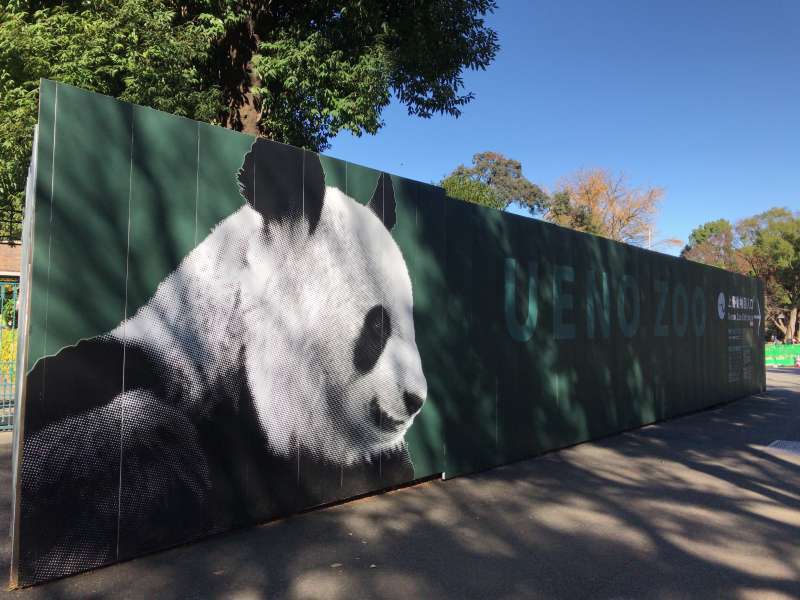 Ueno Zoo, or Ueno Zoological Garden, the oldest zoo in Japan, established in 1882, in Ueno Park. 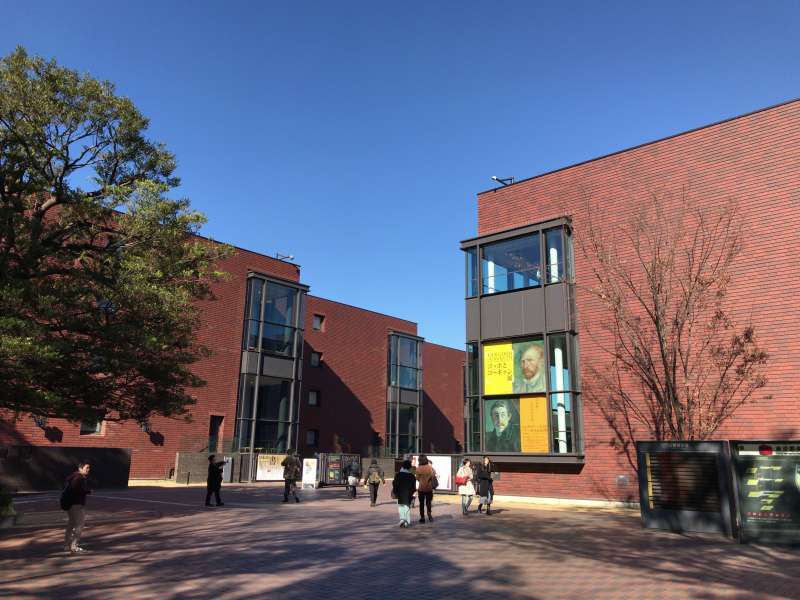 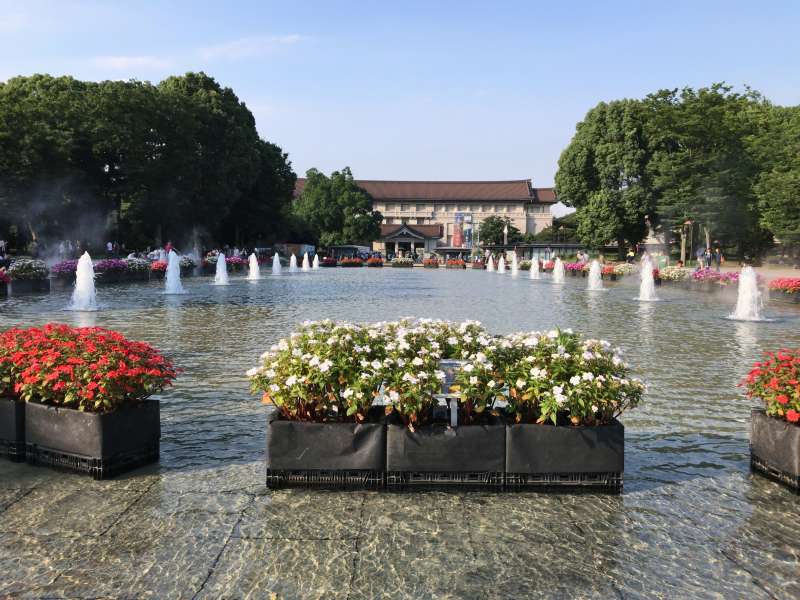 The fountain square in Ueno Park with Tokyo National Museum behind The National Museum of Western Art, registered as a World Cultural Heritage site The interior of The National Museum of Western Art The Tokyo Bunka Kaikan, or The Metropolitan Festival Hall, designed by Kunio Maekawa, built in 1961 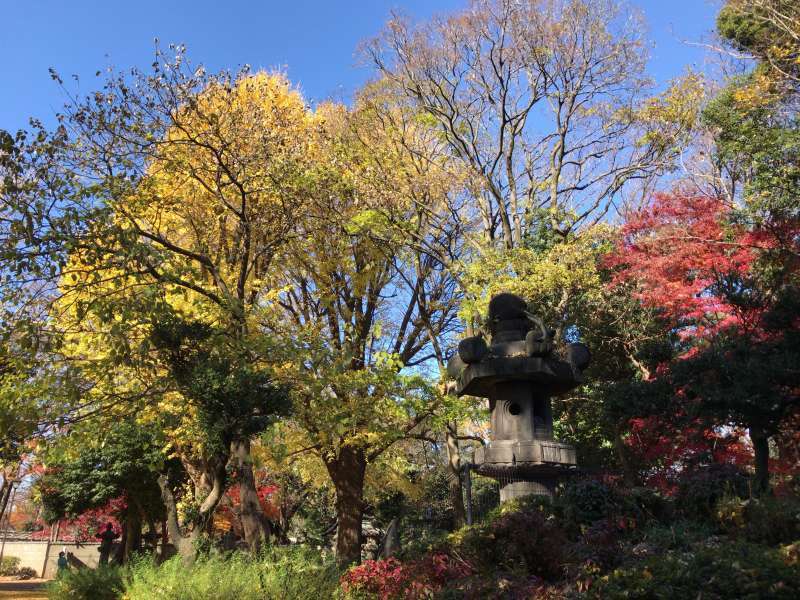 Ueno Toshogu Shrine dedicated to the deified spirits of Tokugawa Shoguns, built in the 17th century 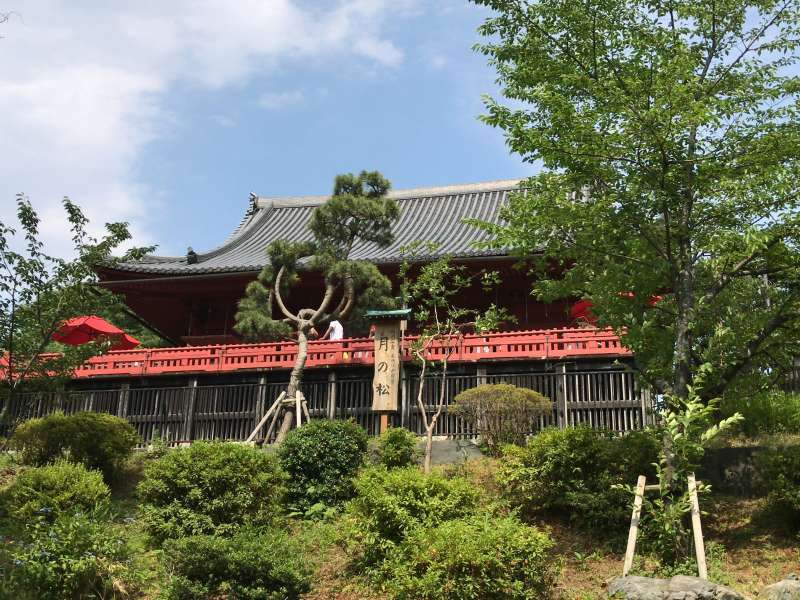 Kiyomizu Kannon-do, modeled on Kiyomizu-dera Temple in Kyoto, built in the 17th century Lotus flowers and leaves in Shinobazu Pond at Ueno Park A Buddhist statue in Tenno-ji Temple in Yanaka. Yanaka has a lot of old houses. Ueno, Yanaka and Around - Appreciating Nature, Architecture and Culture Ueno is a distinguished place where we can see contrasts between tradition and modernity, and tranquility and vibrancy. We walk around in Ueno Park and drop in at several sites such as museums, a zoo, temples and shrines built for centuries ago.
Ame-Yoko, a retro street market, is a must place to enjoy various cuisines. Don’t miss it!

Feel free to personalize this offer with Aki. 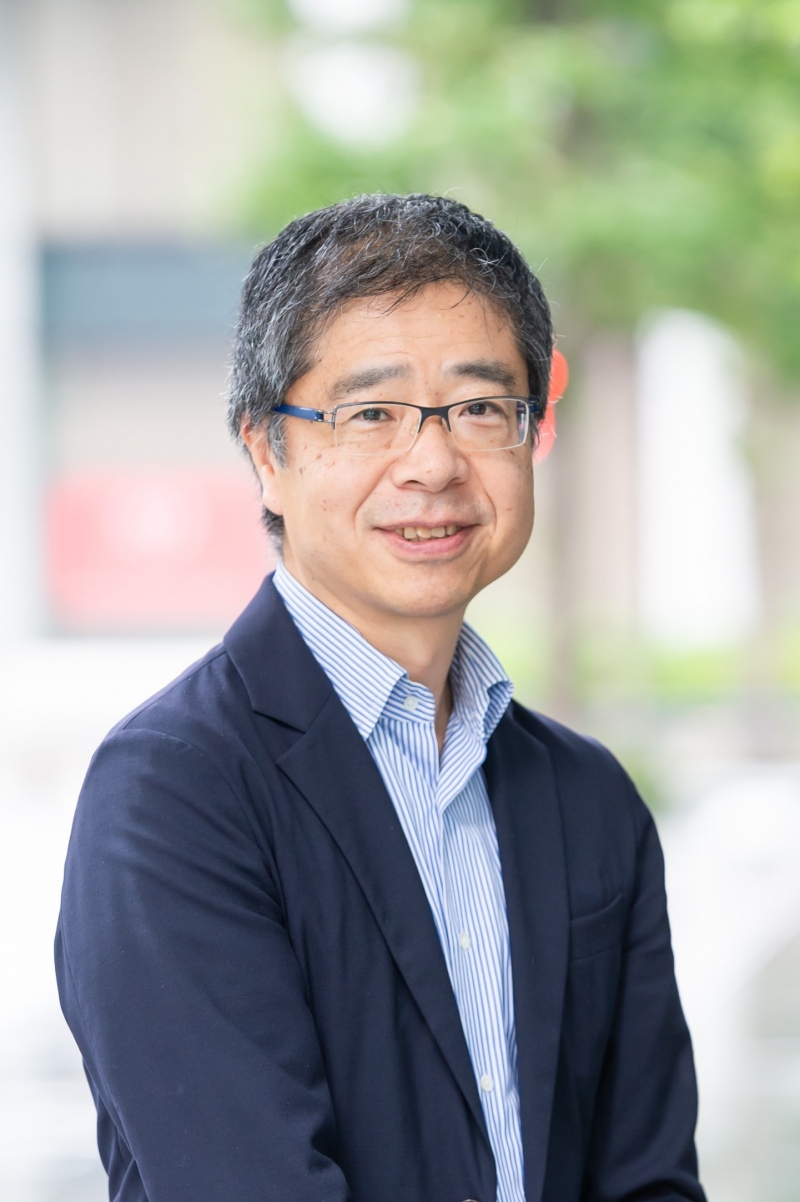 Depart From Tokyo
Starting time 09:00 AM ( recommended )   Flexible
Meeting Point At your hotel or Ueno Station both JR and Tokyo Metro
Ending Point At Ueno Station or wherever in Tokyo within the duration of this tour, including your hotel

The museums are usually closed on Mondays and some specific days.

I can guide you in Okinawa and Kagawa including Naoshima and the other venues of Setouchi Triennale.
If you would be interested in being guided by me in those places, please contact me to confirm my availability in advance.

Museums in Ueno Park are usually closed on Mondays and some specific days.

Besides guide fee, how much does it cost for this tour?

Although the cost varies according to the situation, a typical cost is approximately 3,500 JPY per person.
- transportation fare: 500 JPY (Hotel - Ueno, for a round trip)
- admission fee to 2 museums: 1,050 JPY (The Tokyo National Museum & The National Museum of Western Art)
- lunch: 2,000 JPY
For more details, please refer to the Questions and Answers below.

How much are the admission fees of the museums?

What is the price range of lunch in Ueno area?

Can you escort me to my hotel?

Yes, I can. In this case, please pay Hotel escort fee.
Guide’s transportation fare to the place is also required to be paid.

Can you pick me up at an airport?

Aki was very easy to work with and accomodating to our group of 6. As requested, he put together a 3 day itinerary for us based upon our interests and desired activity level. He is quite knowledgeable about "all things Tokyo" as well as the Japanese culture and history. He is a master of the Tokyo transit system and without him we would have had a difficult time navigating around. We asked Aki to join us during our lunches to show our appreciation and to be able to converse with him on a more personal level. He was always early to arrive at our hotel for pick up. I would highly recommend him.

Dear Jerry, Thank you so much for giving me such an excellent rating and review! That's very nice of you to say. It was my pleasure to have guided you and your friends. I enjoyed touring and had a wonderful time with you too. Thanks for coming to Tokyo and choosing me as your guide! Sincerely, Aki

We spent three days with Aki, exploring the Setouchi Trienniale , using Takamatsu as a home base. We never could have done this without him. We had a great time. Thanks again Aki.

Dear Jerry, Thank you so much for giving me such an excellent rating and review! I enjoyed touring around the Setouchi islands and had a wonderful time with you too. Thanks for coming to Takamatsu and having me as your guide! Sincerely, Akio

We had only 5 hours to visit Kamakura....and gave Aki an almost impossible mission. He succeeded! We saw all of the major sites and enjoyed the wonderful explanations that Aki provided with clear and nuanced English.

Dear Jerome, Thank you so much for giving me such an excellent rating and review! That's very nice of you to say. I hope you are all fine after the tour on a hot day. It was my pleasure to have guided you around Kamakura. Thanks for choosing me as your tour guide! Sincerely, Aki

“ Aki provided all we had hoped ”

Aki was a great guide. He took us to all the places we were interested in and was flexible in his plans given our interests and needs. He clearly knew his way around the island and all the museums. Couldn't have asked for more.

Dear Robin, Thank you so much for taking the time to give me such an excellent review! It was my pleasure to have guided you around Naoshima. I enjoyed touring with you too. It was fun to bike around the island! I hope you enjoyed your stay on the beautiful island. Thanks for coming to Naoshima and choosing me as your tour guide! Sincerely, Aki

From Osaka, with Aki guiding us, we arrived on Naoshima. If it weren’t for Aki I’m afraid we’d still be wandering aimlessly around. While on the island; Aki’s knowledge of the architect represented here and the designers/artists was great. With his guidance we could just follow as had clear understanding Of how to navigate the island. This provided a pleasureable day. As I got a sense of his services and then began arranging the itinerary, Aki was incredibly quick in his responses to my many online questions. He speaks English very well. One can’t go wrong with Aki’s guidance

Dear Janis, Thank you so much for giving me such an excellent review! It's a great pleasure for me to have guided you around a beautiful island, Naoshima. I also enjoyed touring and had a pleasant time with you. It was very nice to meet you! I hope you have a good day and go back to your home safely. Please convey my regards to your husband and friends. Thanks for coming to Naoshima and choosing me as your tour guide! Sincerely, Aki